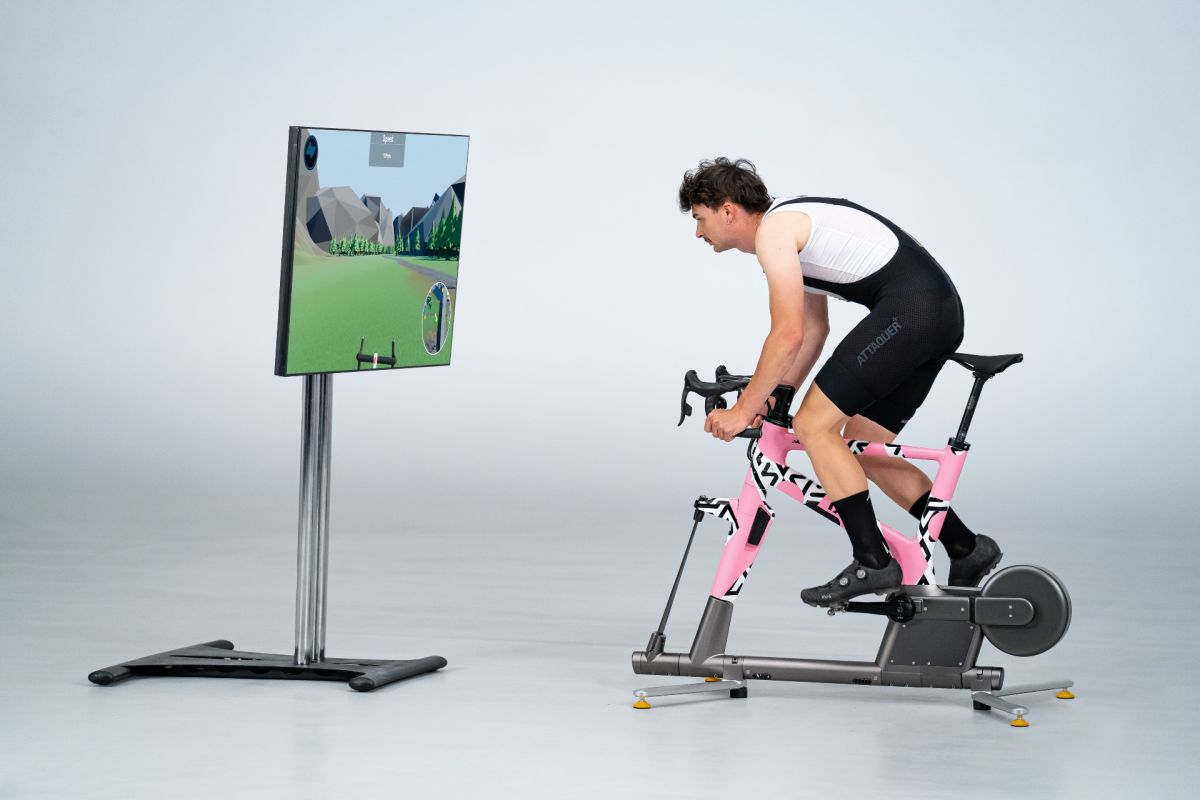 
Muoverti has unveiled a pre-production model of its newest immersion exercise bike, TiltBikes, claiming it is the ‘first indoor bike that feels like real cycling’.

At this time of year, indoor cycling goes from being a convenience to, for most dedicated cyclists, a must have. Short days. Frozen roads. Wind and rain for weeks. It’s enough to send even the toughest to find the best turbo smart trainer. But even with today’s advancements, it’s difficult to recreate the same feelings you have when you’re riding. TiltBikes aims to address this.

To create some ‘real feel’, TiltBikes has designed a stationary inner trainer that allows riders to balance and steer, brake and accelerate.

The first videos show the cyclists shifting their weight with abandon while the bikes lean and move accordingly; Everything Muoverti says means that you exercise many of the same muscles as when you are riding for real. To enable such movement, TiltBikes uses lateral frame rotation combined with digitized self-centering handlebars, allowing the bike to move freely under the rider.

To date, even the most advanced smart trainers (like the Wahoo Kickr bike) have had trouble recreating the sensations we feel when we ride outdoors. Muoverti claims to have solved this by designing a proprietary system that uses an electromagnetic resistance control that communicates with a physics engine using algorithms updated 1,000 times per second.

If it sounds terribly high-tech, it’s because it probably is. But it is essentially used to recreate the feel of physical forces, such as lean, inertia, and rolling resistance, that we experience on the bike. Former pro and two-time TdF stage winner Simon Gerrans has described TiltBikes’ ability to accurately simulate such forces as “a game changer for indoor cycling.”

It seems logical that producing an indoor bike that looks like our real bikes requires it to accommodate a variety of riders and riding styles. At first glance, it appears that Muoverti has really gone to town here, allowing for extensive customization of TiltBikes.

Cleverly enough, the shift can be digitally customized, allowing you to replicate your favorite group, including your gear ratios, or even create new settings. The lengths of the cranks are adjustable thanks to a patented system, while the height of the seatpost is taken care of the old way with a quick-release clamp. Your favorite saddle and pedals can be easily installed according to Muoverti.

Data readings and feedback are generated through a range of sensors on the bike that capture the rider’s movements, such as left-to-right balance and sitting or standing position, in addition to common cycling metrics, such as power and cadence. Add the companion app and you have over 20 cycling statistics delivered in real time to help you visualize your performance.

Muoverti has designed TiltBikes to be compatible with all of today’s leading racing and training platforms, from Zwift to TrainerRoad. It can also be used as a controller for game consoles due to its integrated joystick controls.

TiltBikes will go on sale in 2022. More information on this most intriguing of indoor trainers is available at muoverti.com