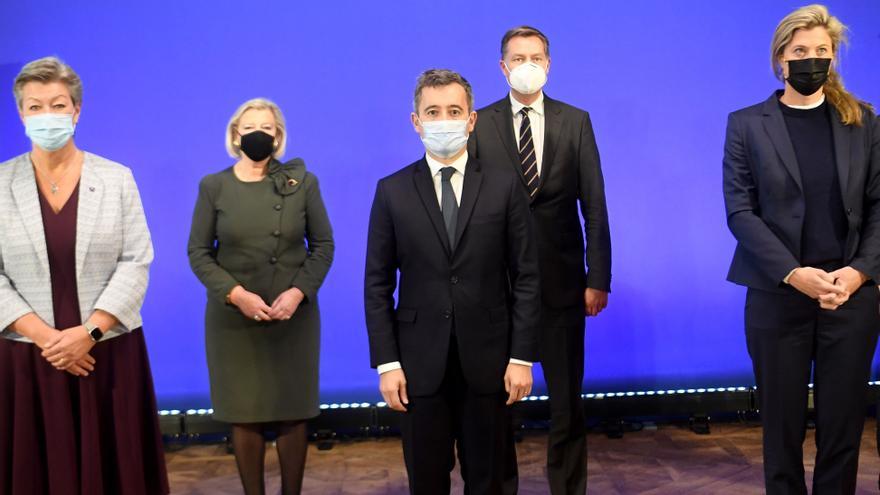 
The European Border and Coast Guard Agency (Frontex) is going to contribute to control of immigrants trying to reach the UK from France via the English Channel. It is one of the main conclusions of the meeting held, at the request of France, by the Interior Ministers of Germany, Belgium, the Netherlands as well as the European Commissioner for Interior, Ylva Johansson, and the executive directors of Frontex agencies –Fabrice Leggeri-, y Europol -Catherine De Bolle- in the French city of Calais. An encounter that has occurred four days after 31 people lost their lives at sea in one of the deadliest shipwrecks that have occurred on this journey.

The meeting has not been without controversy for the clash between France and the United Kingdom on account of a letter sent by the British Prime Minister, Boris Johnson, to his French counterpart, Emmanuel Macron. In the document, that the premier hung on twitter, urged Macron to take care of returned immigrants from the UK. The anger in Paris meant that British Minister Priti Patel was not invited to the meeting.

The French Minister of the Interior, Gérald Darmanin, has announced that as of December 1st will mobilize avion of the Frontex agency to detect and intercept “illegal” sea crossings to the UK.

“Day and night you will be able to help the French, Dutch and Belgian police to see the smuggling networks and the crossings and to avoid them as far in advance as possible,” he said at the end of the meeting in Calais. According to Darmanin, France hopes to announce “great progress” in this regard when it takes office next January. presidency of the Council of the European Union.

However, he anticipated “an even more intense fight” against those flows and their traffickers, and also called on the United Kingdom to assume its responsibility in the call effect that the country has for immigrants.

“If they come here it is because they are attracted to England by its job market,” he said. Darmanin, which has stressed the joint will to work with the British authorities but has insisted that it must be done seriously, “without being hostage to domestic politics”.

The British Home Secretary, Priti Patel, the great absentee from the meeting, has not hesitated to express himself through Twitter saying that he will carry out “urgent interviews with (his) European counterparts” next week.

“The death of these 31 people should be a clear call for cooperation,” he said in turn in a forum published by the tabloid The Sun. According to Patel, joint work of Paris and London “It made it possible to avoid more than 20,000 crossings this year” and to carry out more than “400 arrests,” he said. “But we can do much more” with “effective and coordinated actions on both sides of the Channel,” he added.