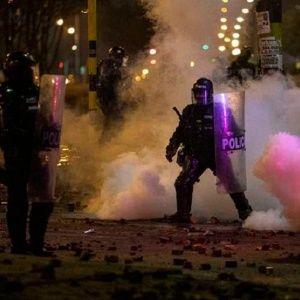 Colombian man involved in Moise’s murder is brought to Miami

The social organization National People’s Assembly 2021 (ANP 2021) published videos on social networks that show how the police attack citizens protesting in a poor neighborhood located south of the capital city.

“At this moment, in the Molinos neighborhood, ESMAD represses the demonstration carried out by the community against the increase in the TransMilenio rate … We denounce the disproportionate use of force against the peaceful demonstration,” said ANP 2021.

The ESMAD agents arrived at the place where the citizens were concentrated with two tanks that threw stun grenades and fired tear gas indiscriminately in a residential area. The community denounced that ESMAD detained a young journalist and kicked him. Officers also detained a teenage girl whose whereabouts are unknown at this time.

The tweet reads: “Supported by tanks and helicopters, ESMAD harassed and repressed the protesters who rejected the increase in the TransMilenio fare in Molinos, south of Bogotá.”

“The drug dictatorship threatens Colombians and prevents them from holding marches and protests. It militarizes the places where people protest. The right to protest is being violated, ”Senator Raquel Lizarazo tweeted, referring to the government of President Iván Duque.

Hours before the events in the Molinos neighborhood, Defense Minister Diego Molano spoke out in favor of militarizing some areas of Bogotá. This proposal, however, was even rejected by Mayor Claudia López.

In December, the company TransMilenio announced that the transportation rate will increase from US $ 0.37 to US $ 0.64 as of January 11. This policy outrages the population and affects lower-income workers.

“Paying a fine of $ 0.64 for terrible service is an abuse against citizens. It’s fair to protest, ”tweeted human rights defender Edith Parada, explaining that businessmen raise the price of basic goods and services in a country where purchasing power continues to fall.