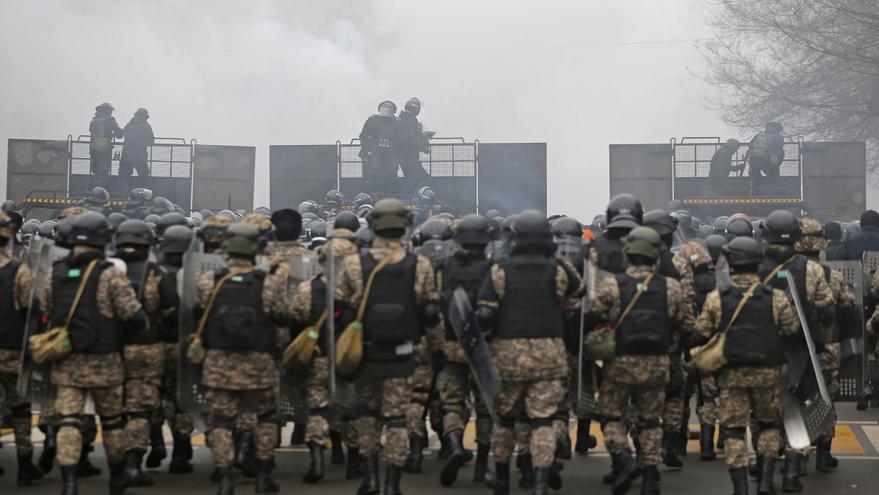 Russia sends troops to quell the revolt in Kazakhstan, which has already killed dozens


Dozens of protesters have died at the hands of the police and more than 1,000 have been injured in Kazakhstan, as the authorities have indicated this Thursday, the same day that Russia and his allies sent troops to deal with the violent unrest in the country.

The anger, which began Sunday in provincial areas due to rising fuel prices, spread to the country’s largest city, Almaty, where it turned into a riot, with protesters seizing government buildings and, briefly, the airport, as looting increased.

Faced with the chaos, neighboring Russia and its allies in the Collective Security Treaty Organization (CSTO) announced on Thursday the dispatch of the first contingent of a “collective peacekeeping force” to Kazakhstan, at the request of the authoritarian government of this Central Asian country.

The contingent, made up of Russian, Belarusian, Armenian, Tajik and Kyrgyz troops, will have the mission of “protecting state and military facilities” and “helping the Kazakh forces of order to stabilize the situation and restore the rule of law.”

Kazakh President Kassym Jomart Tokayev has so far failed to quell the protests, despite concessions on gas prices, the resignation of the government and the introduction of a state of emergency and a night curfew in the country.

On Thursday, the police reported that “dozens” of protesters had been killed trying to seize administrative buildings and police stations.

The Ministry of Health has indicated, for its part, that there are more than 1,000 injured, including 62 in intensive care.

In addition, 13 members of the security forces have died, two of whom were found beheaded, and 353 were injured, according to state television.

No internet or flights

The images disseminated by the media and social networks show scenes of chaos, with shops looted and some administrative buildings attacked and set on fire in Almaty, the economic capital of the country, while shots of automatic weapons were heard.

The Central Bank spokeswoman, Oljassa Ramazanova, has announced the suspension of the work of all financial institutions in the country, where the internet does not work.

The airports of Almaty, the cities of Aktobe and Aktau and the capital, Nursultán, are not operational this Thursday after the cancellation of flights the previous day.

As a consequence of the chaos, the price of uranium, of which Kazakhstan is one of the world’s leading producers, rose sharply, while the prices of domestic companies plummeted on the London Stock Exchange.

The country is also a center for mining bitcoines, an activity that is also experiencing a sharp decline.

The Kazakh President has introduced this Thursday emergency measures to “stabilize the work of public services, transport and infrastructure”, reinforce the readiness of the security forces and restore the work of banks.

The export of certain types of food has also been banned to stabilize prices.

Tokayev said Wednesday that “terrorist gangs” who had “received extensive training abroad” were leading the protests.

“Groups of criminal elements beat our soldiers, humiliate them, drag them naked through the streets, attack women and loot shops,” he said in a televised speech.