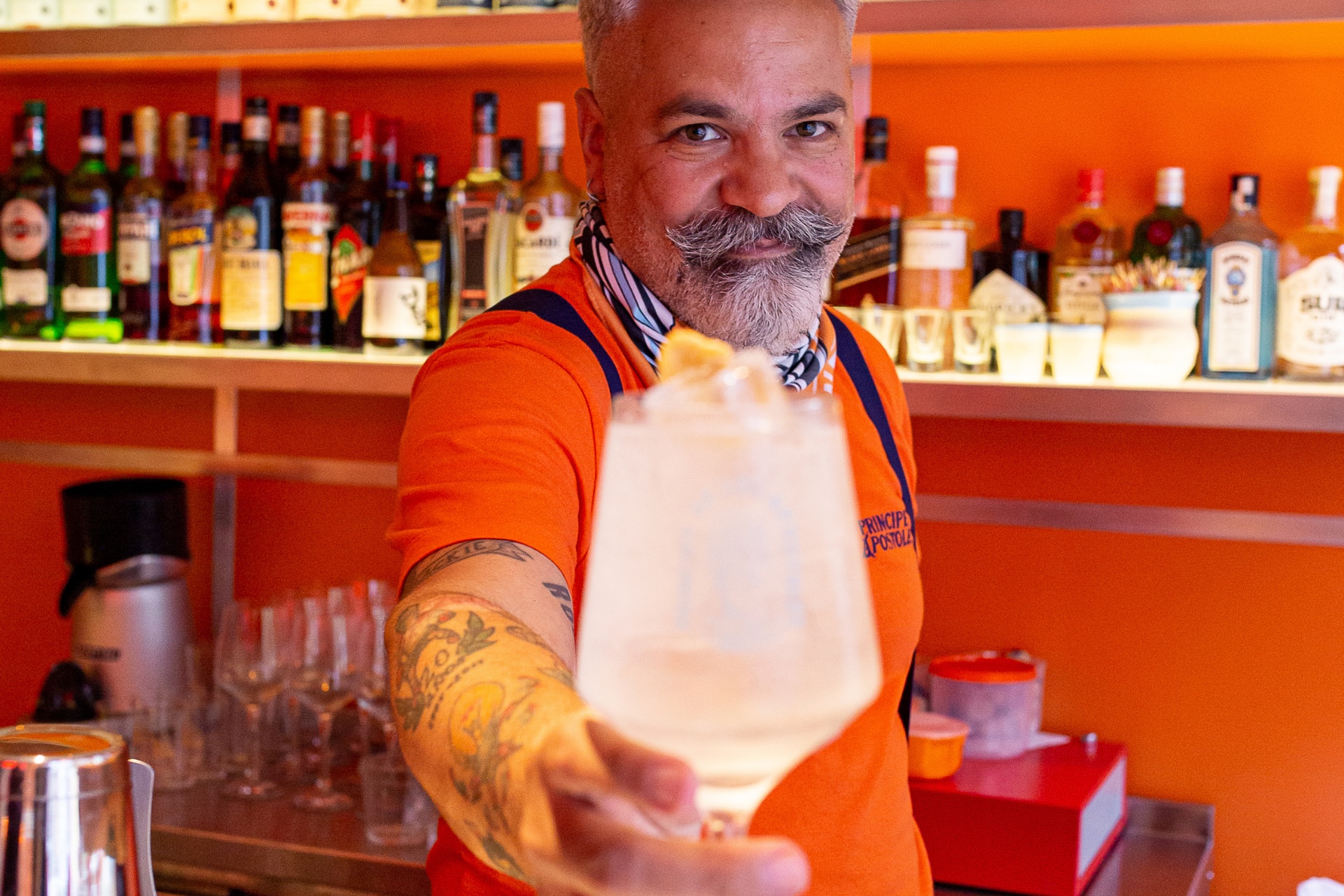 Pablo Pignatta. “Being a host is giving the best of me”


In April 2021, the news began to circulate through gastronomic WhatsApp groups and mutual friends: “Pablo was hospitalized. Because of Covid. It seems that it is very bad”, they said. The calls multiplied, no one was indifferent to the message: Pablo is Pablo Pignatta (or Piñata, as they usually say). Not only one of the most recognized bartenders in the country, but also one of the gastronomic references most loved by his peers and by those who frequent the bars where he works. With his gray beard and mustache, the t-shirts designed by himself (he sells them through the Flashcookie platform), and a mischievous smile, he is the same Pablo who for 20 years knew how to host behind the mythical Bizarro World, the bar that reopened at the end of of the last century the Buenos Aires cocktail bar and that became an indispensable part of the Buenos Aires night. Together with Inés de los Santos and Tato Giovannoni, Pignatta forms the trio responsible for thousands of young and not so young people seeing Martini glasses in bars, drinking Old Fashioned and Negroni, learning about whiskeys, rums and tequilas.

With an old school look at what cocktails are, this bartender also worked for three years in charge of putting together Aldo’s cocktail proposal; Already with the pandemic on him, he lost his job at a key moment in his life, just before turning 50. “I made friends with two doctors who treated me in those days. When I was already recovered they confessed to me that there was a night where it seemed that I couldn’t make it, that I was dying. Luckily I survived, then I started to get better”, he says today, still emotional, while receiving friends and diners at the Chintonería bar, the brand new bar opened less than a month ago in the new gastronomic center behind the Belgrano train station. c.

–What do you remember from the hospital days?

-I spent twelve days in an induced coma with severe bilateral pneumonia. During that time I lived a survival trip, I had a series of hallucinations caused by the combination of ketamine and propofol. I saw myself in a hospital bed, in a much nicer room than it really was. I was always looking at the ceiling –although later they explained to me that no, that they were rotating me all the time–. It was a very mystical dream, very cinematographic, where I put a lot of my side as a designer. There was the devil, who said that he could cure me, he could save me. He offered to give me fame, also a bar of my own, all in exchange for my soul. And since I didn’t want to give it to him, he sent me into some tremendous, very dark nightmares, which I saw as if in 3D animations, with some hunters with dogs that were chasing me, where there was not a ray of light, it was terrifying.

–And in the end how did you save yourself? Did you sell your soul to the devil?

-No never. At one point I even gave up. I decided to stop breathing. I felt that I was ready to leave, I had already done well professionally, in love, I could finish my path. At that moment a nurse appeared – always in my dreams, none of this was real – and told me that they were going to wake me up, to take a bath. I told her no, that I didn’t want any more, but she didn’t listen to me: she told me not to inflate my balls and to do what she told me. From there I got better.

–It is the porteña house of the Gintonería, the bar of Tato Giovannoni and Adrián Glickman that opened first in Rosario and then in Córdoba. It is a young place, we think of it as the closest thing to a brewery in the world of cocktails. The idea is that young people, 20, 25 years old, understand what the cocktail bar, the bar, the cocktails, are about in an easier way. That after here they graduate and can also enjoy going to a cocktail bar.

–You were always the prototype of the classic bartender. Is that changing?

-It’s true, I always liked to be more old school, to be a bottler, that is, to use packaged products and not so much syrups and homemade preparations. But now I am playing much more, in tune with current techniques and tastes. The best-selling gin and tonic in this first month of Chintonería is the Bananarama, which I prepare by clarifying it with banana and coconut yogurt. The truth is that I love working only with bottles, but that also has a limit, I already wanted to go beyond it. It’s not good to always stay still.

–For that same reason you left Bizarro in 2017?

-A little, yes. The bar was dying of starvation, precisely from standing still. I proposed changes all the time, in the food, in the building, but the owners did not accept them, they said that they could not be done. In a moment I understood that I no longer served the bar, that I needed to start moving. There I decided to go. A month later, Bizarro permanently closed its doors.

–A few months ago you turned 50. How did you experience it?

-It was a major blow. I had never raised the subject of age before, but this time I really felt it. I came from a shitty 2020, recovering from the disease, due to Covid I had lost my job at Aldo’s. Actually, I never lacked work – I did a lot of events and productions for brands – but I didn’t really understand where I was standing, I didn’t see a possibility of projection. The 50s made me ask myself questions that I had never asked myself. Luckily, there was the possibility of joining Chintonería as an operating partner and at that moment, when I felt very weak physically and emotionally, it was really important, that they thought of me was very flattering. And that also allowed me to do something that, after the hospitalization, I had decisively proposed for my future: work only with friendly people, with good people, in healthy teams.

–Do you miss those long mornings of Bizarro?

–I think that in the last few years, in the three years of working at Aldo’s, I’ve become a little more adult, more serious, if that word can be applied to me. I’m a little less rock, less nocturnal, less classic. But the night still enchants me, I love the rhythm of the bar in full frenzy. The Chintonería is much more daytime, we open at 6 pm and soon we will even start at noon. Here the rush hour is at 9 pm and I like it. Of course, although I am more from the outside controlling everything, when I see the guys in the office with a full bar, I am a little envious, they make me want to get in and get drinks together with them.

–Everything: being a host is giving the best of me. To be able to tell a joke to a client, to be told how good the music is, how delicious the drink is. I love receiving that energy, that love that diners give you. At the bar you feel all this immediately, you don’t need a spreadsheet to see how you did.

–Are there new projects underway?

-If many. Even before the Chintonería had several things in motion, but still none closed. Now they are evolving and soon they will be able to be seen in the light. My dream is always to have my own cocktail bar, a darker, more nocturnal bar. As I like to say, a bar with no windows to the street.