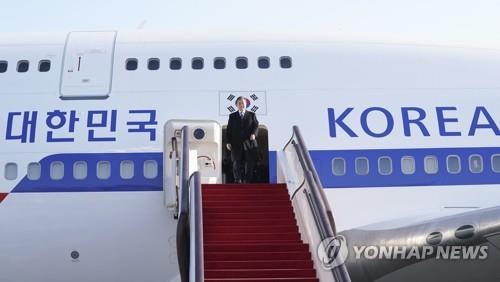 The new presidential plane, a Boeing 747-8i, was put into service on Thursday. Moon and his entourage flew aboard the new Air Force One for an eight-day trip to the United Arab Emirates, Saudi Arabia and Egypt.

The 213-seat plane was equipped with various security and communication devices, as well as hardware to improve its defense against external attacks, such as missiles, while the new engines increased its cruising speed and maximum total range, the presidential office said.

In 2020, the government signed a five-year contract with Korean Air Lines Co. to lease the new aircraft.

The lease period for the previous presidential plane, the B747-400, expired on Monday, after flying some 1.62 million kilometers since it entered service in 2010, the office said.