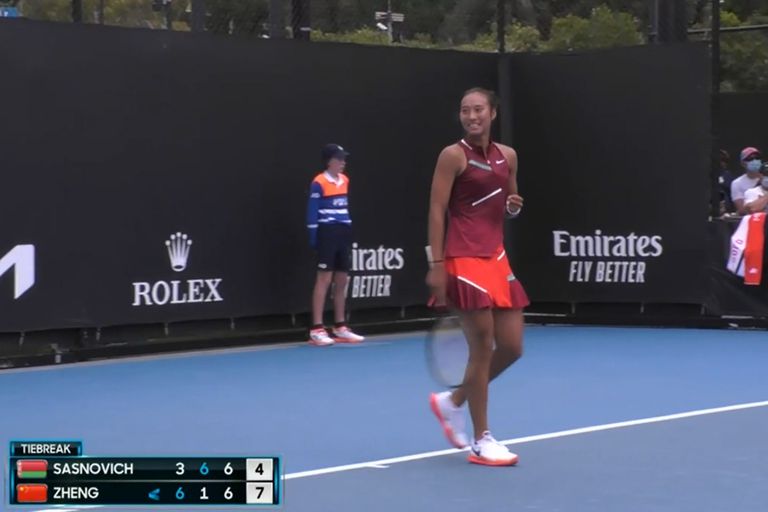 
A curious fact was experienced in the first round match of the Australian Open among the chinese Zheng Qinwen and the Belarusian Alexandra Sasnovich. In the third set, and with the match going down to a tie-break, the 19-year-old Chinese thought she had won after earning her seventh point. Forgot that in the Grand Slam tournaments definition stretches to 10. In the end, the Asian tennis player who came from qualifying ended up winning 6-3, 1-6, 7-6 (10-5 in the tie-break). Now, Qinwen will face the Greek Maria Sakkari, number 8 in the world. In the only precedent between the two, the Chinese prevailed in 2019.

With the tie-break 6-4 in favor of the young Chinese, Sasnovich’s right stayed in the strip. Qinwen smiled and left the base of the court towards the net, with the left fist raised. He took a few steps, but saw that his rival did not make the same move. Suddenly, he was surprised. His countenance changed when they told him it was the best of ten points and not seven.

Then, he turned on his steps and continued taking out. The blooper did not change the convictions of the young Chinese, who ended up winning the match 10-5 in the tie-break. His rival could barely get a point out of him. And only then There was a greeting at the net between the two players, with the Chinese going to the second round already consummated.

The celebration before time of the Chinese Zheng Qinwen

Zheng Qinwen is 19 years old and ranks 108th in the women’s ranking prepared by the WTA: It is its best historical location. In doubles he is ranked 890th in the world rankings. As a professional, the Chinese tennis player has won slightly less than US$ 100 thousand (83,633 dollars). So far, Qinwen has won 105 matches and lost 50. In 2022, his record is 5 wins and just one loss. It comes from having a great performance in Melbourne: It was the fourth ATP of her entire career and she reached the semifinals, where she fell to the Romanian Simona Halep in straight sets.

According to her profile on the WTA page, Qinwen played different sports before deciding on tennis.. He started with table tennis, very common among Chinese children. “I used to get sick, so my parents advised me to play sports and choose one. I tried with him badmington, the basketball and then the tennis”, recalls Qinwen quoted by the WTA. The young woman, trained by the former Spanish tennis player Pere Riba, he adds: “I chose tennis because I liked the competition, especially that feeling of beating the opponent. Of course, every time you lose you feel bad, low, you think the world is broken. But competition is what I love most about tennis”.

Qinwen idolizes the men of the Big Three (the Serbian Novak Djokovic, the Spanish Rafael Nadal and the swiss Roger Federer), although the latter is his source of inspiration. “He is so classic on the court that I still watch his videos when he plays. Of course, Djokovic and Nadal are spectacular and I try to learn from everyone”, says Qinwen. And he tells an anecdote with the Mallorcan in a note published on the WTA page: “I saw a practice of his and… wow! It is spectacular. I didn’t have the courage to ask for a photo. I do not want to bother. I really want a signature from him and the photo, but maybe I’ll do it later, when I improve my game.