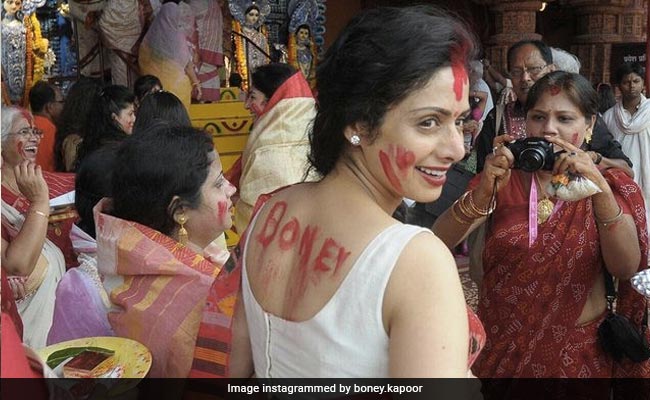 Boney Kapoor, who recently made his Instagram debut, loves sharing old photos of his family members. On Tuesday, the actor shared a flashback photo of his late wife and actress Sridevi. The image is from the 2012 Durga Puja celebrations. The film producer captioned the post: “In Lucknow celebrating one of the Durga Puja festivals in Sahara Sahar in the year 2012.” Sridevi, who was often called Bollywood’s “first female superstar”, died in Dubai in 2018, where she attended a family wedding.

Given this, the film producer shared a memory of Cannes. He wrote: “We both had a sweet tooth, she was in control of how much to eat and I was not.”

Adding another beautiful entry from Tokyo, Boney Kapoor wrote: Leaving the hotel lobby. We were there for the premiere of English Vinglish. It remains one of the most successful Indian films in Japan.”

The last film of the actress was MOTHER (2017), which also had the support of her husband Boney Kapoor, for which she posthumously received the National Film Award for Best Actress in 2018.

Sridevi acted in 300 films in a career that spanned more than 5 decades. His last on-screen appearance was in the 2018 film. Zero, starring Shah Rukh Khan, Anushka Sharma and Katrina Kaif. The segment with Sridevi was filmed long before her death.

Janhvi and Khushi are the daughters of Sridevi and Boney Kapoor. Janhvi Kapoor made her Bollywood debut with Dhadak in 2018 and has starred in various projects since then. Khushi studies in New York and aspires to be an actress like her sister.