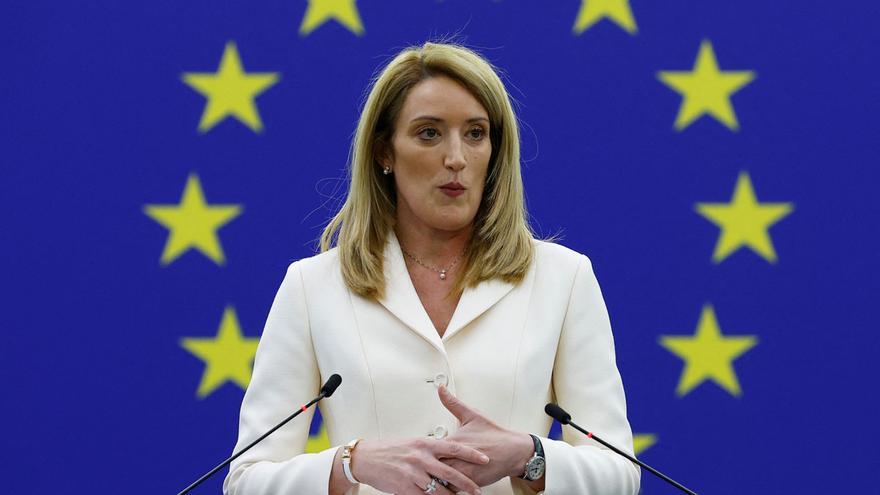 
After the emotional farewell to David Maria Sassoli (65 years old, Italy), who died on January 11, one week before the end of his mandate, the plenary session of the European Parliament has chosen this Tuesday for a vast majority to which will be his successor in office during the second half of the legislature. A position that has fallen, as planned and without surprises, to the Maltese Roberta Metsola (43 years old, European People’s Party), who more than twenty years later has become the third woman in history on Tuesday, and in the youngest, to preside over the European institution after the French Simone Veil Y Nicole Fontaine.

The pact between the three large groups in the Chamber -popular, social democrats and liberals- “to guarantee a stable majority of work until the 2024 elections” cleared this past Monday the path of the Maltese that has faced other in the final sprint two applicants: former Swedish culture minister Alice Bah Kuhnke for the Greens and the Spanish Sira Rego for the United Left, since the Polish ultraconservative Kosma Zlotoswski, and announced candidate of the European Conservatives and Reformists (ECR), has withdrawn his candidacy before the start of the session.

“I was 10 years old when I first picked up the phone and the Nazis told me that I did not belong in Sweden, where I was born and raised. That person told me that they would kill me if I did not leave my native country, my home. Those threats never stopped but my fear turned into anger and that anger turned into political action. I am European, I was elected by citizens, I am a deputy and I present myself as a candidate for the Greens/ALE”, she recalled Kuhnke at the beginning of the session on the threats received by him color of his skin.

“I come from Spain, the country in which this global phenomenon has been created, which is The Money Heist. Its screenwriter, one of the architects of that Bella Ciao is chanted again all over the planet says that “the day has not yet dawned when it is not a good idea to sing an anti-fascist anthem”. The anthem we sing today is that of a more social, more ecological, more feminist Europe. It is enough that we build a broad democratic alliance between those of us who stand against the reactionary barbarism”, has been presented Rego during his five-minute shift.

“This is where we have to find a way out for the migration issues, energy, equality, health, social justice… Women’s rights cannot be something we consider in passing, the fight for real equality has to go beyond something merely cosmetic. I will be proud to be the president who leads that battle to honor the legacy of all those who came before”, said, for her part, the Maltese who has promised renewal and represent “the vision of this House”, included in such divisive issues like abortion.

Ni Kuhnke ni Rego they had too many options grand coalition that has risen to Realm of the forest, who has not had to be aware of the parliamentary calculator. The EPP has 177 seats, the Social Democrats with 144 and the Renew Liberals with 100. In total, 388 seats out of the 705 in the chamber. Finally, 690 votes have been cast, of which 74 have been blank or null, with which the absolute majority has been set at 309 votes (of the 616 valid). Metsola, who according to the votes has also received the support of the ultra-conservatives, has far surpassed that barrier by receiving 458 votes, compared to 101 for Kuhnke and 57 for Rego.

The MEPs of the three groups have thus respected the agreement, by which the Social Democrats guarantee a “strong institutional representation” and support for a working document with four priorities -rule of law, women’s rights, social dimension and fiscal rules- , with which the election has not been complicated and only one round of voting of the four provided for in the regulations has been necessary. According to the pact, the Social Democrats who will be left with 5 of the 14 vice-presidencies at stake, two more than they currently have, and the Renew Liberals three, as well as support for the transnational lists in the European elections of 2024. A pact that has started the anger of the Greens whose leader, Philip Lamberts, has made the support based on the distribution of charges and posts ugly. “It is not acceptable that the majority marginalizes the minority,” he complained.

Despite the commitment of the three great political forces, the election of Realm of the forest it will reduce the weight of socialists in high European positions. Although they have regained ground in recent years and govern alone or in coalition in more Member States than two years ago, they do not preside over the European Commission (Ursula von der Leyen, PPE), nor the European Central Bank (Christine Lagarde, PPE), nor the European Council (Charles Michel, liberals) with which from now on they will only maintain the position of High Representative for EU Foreign Policy, which is held by the Spanish socialist Josep Borrell.