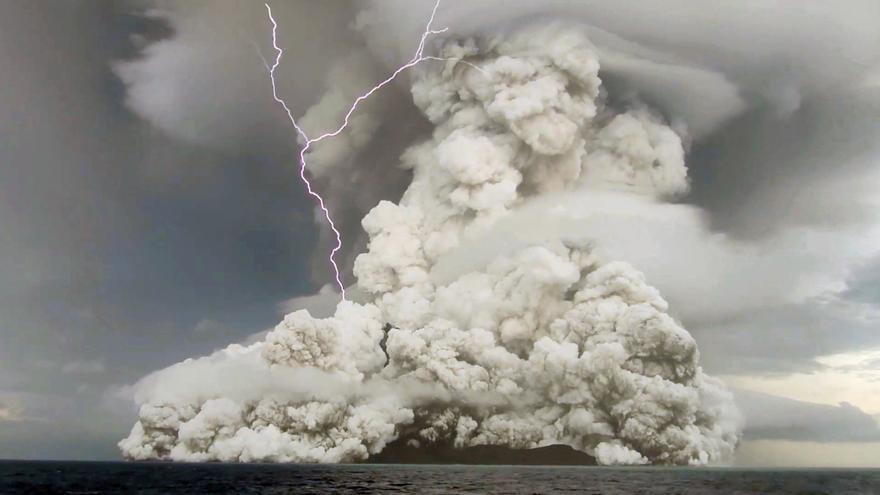 ‘Extensive damage’ reported in Tonga after eruption and tsunami


Relief agencies reported on Tuesday “Great damage” in Tonga after the massive eruption of an underwater volcano followed by a tsunami in this Pacific archipelago, where one death from the disaster was confirmed. The first indications of the magnitude of the crisis in the island country began to be known through irregular satellite phone calls and satellite images, three days after the eruption.

The body of a British woman swept away by the tsunami has been found, her family said, and at least one other person has been reported missing. The number of victims of the tragedy is unknown. Meanwhile, two Mexican biologists were trapped in Tonga although they are out of danger, while the government and their families are trying to get them out, the Mexican Ministry of Foreign Affairs said. In turn, Peru isolated three beaches in the province of Callao after an oil spill attributed to the abnormal waves recorded after the eruption volcanic in Tonga, reported the Environment Ministry. On Saturday, two women from that country died swept away by the waves.

The UN Office for the Coordination of Humanitarian Affairs (OCHA) revealed that surveillance flights confirmed “substantial property damage” on Mango and Fonoi islands. “An active distress signal was detected in Mango“, indicated OCHA in an urgent report. The island has about 30 inhabitants, according to the Tonga census. The agency also reported “great damage” on the western beaches of the main island Tongatapu, “with several hotels and/or houses destroyed and / or severely damaged”.

The capital Nuku’alofa was covered in two centimeters of volcanic ash and dust, while power was restored to parts of the city. Internal telephone systems were restored but international communication continued to be interrupted. The capital’s boardwalk was “seriously damaged by stones and debris carried inland by the tsunami,” OCHA said.

Images released by the UN Satellite Center showed the impact of the eruption and tsunami on the small island of Nomuka, one of the closest to the Hunga-Tonga-Hunga-Ha’apai volcano. The center indicated that of 104 structures analyzed in the area that was not covered by clouds, 41 were identified as damaged and almost all covered with ash. Australia and New Zealand, which have sent Orion reconnaissance planes over the island, have prepared aid shipments for Tonga.

Australia noted that the ash from the airport had to be removed before landing a C-130 military plane with the help. OCHA was expecting this to be done by Monday, although the current situation is unknown. Water is one of the priorities, New Zealand Defense Minister Andrew Bridgman said for the risk that water sources have been poisoned by volcanic emanations.

Major relief agencies, which often come with emergency humanitarian aid, have said they are at a standstill unable to contact their local staff. “For the few updates we have, the magnitude of the devastation could be immenseespecially for the outlying islands,” said Katie Greenwood of the International Federation of the Red Cross regional branch. But even when relief efforts can start, they could be complicated by Covid-19 entry restrictions. Tonga recently reported its only case of coronavirus.

Saturday’s eruption was one of the largest in decades, sending ash, gas and acid rain spreading across the Pacific. The eruption was recorded around the world and heard as far away as Alaska, triggering a tsunami that inundated Pacific coastlines from Japan to the United States.

Tonga may spend weeks incommunicado until they fix the underwater cable connection, the company responsible for the link reported Tuesday. The scarce communication with this nation, made up of 169 islands and 105,000 inhabitants in the South Pacific, makes emergency tasks difficult and prevents knowing the current situation of the country after the relentless shaking of the waves. Tongan authorities have not yet been able to communicate with many of the inhabited islands, some of which rise only a few meters above sea level.

The cable linking communications to and from Tonga, linked from neighboring Fiji, has broken some 37 kilometers off the Tongan coast, confirmed Dean Veverka, chief technical officer of the Southern Cross Cable company. “These days, submarine cables carry about 99% of all communications between countries … Tonga will spend quite some time with limited communications,” the expert told Radio New Zealand.

To start the repair, the first thing is for a ship to arrive that is currently in Papua New Guinea, some 2,500 kilometers away from Tonga, which in itself would take weeks., apunta Squirrel.

The American company Planet, which has a network of 150 satellites, showed this Tuesday the first aerial images of the devastation caused by the tsunami in Tonga thanks to the fact that the “clouds caused by the volcano are clearing,” they point out on Twitter. In a photograph it can be seen that a coastal settlement with around a hundred buildings and the nearby forests have practically disappeared completely and is now covered by a dense blanket of ash.