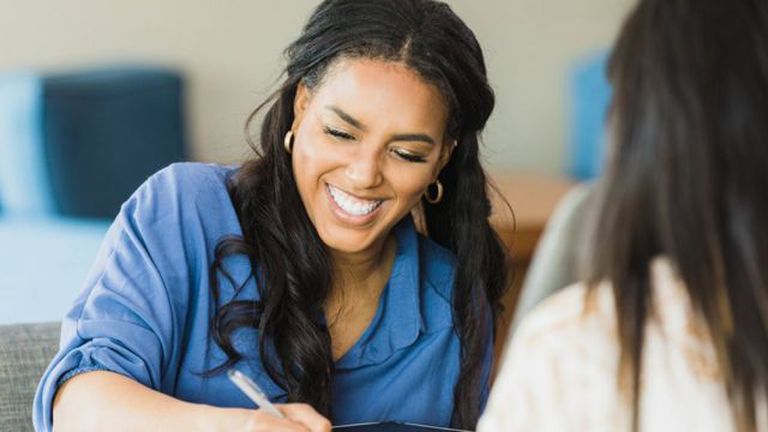 
Nothing more awkward than an unexpected (or too open) question in a job interview.

“Tell me about yourself” is an expression that some interviewers may use to break the ice.

The problem is that not all job applicants take it as an opportunity to highlight what they consider most relevant about their work experience and personal skills.

For some, it can be a really intimidating question when they don’t have a little script prepared that allows them to convince the interviewer that they fit the profile that the company is looking for.

Therefore, experts advise, It always pays to have a short speech about yourself prepared that can serve to transform any broad question into an opportunity.

And while the challenge is knowing what to say, you also have to know how to say it.

“It is difficult to answer this question because it requires a great ability to summarize our life and our careers in a few sentences”, Melody Wilding, an American labor consultant, tells BBC Mundo

It is especially hard for people who have played very different roles and whose skills come from different fields of work.

And it is also difficult for people who do not have the ability to focus on the most important issues, letting themselves be carried away by a sea of ​​thoughts and memories without a clear common thread that gives meaning to the story.

“People feel a lot of pressure trying to impress the interviewer with the answer, and it’s that pressure that makes them nervous and doesn’t allow them to think clearly,” says Wilding.

When an interviewer asks that question, he adds, they’re usually looking for a summary of your experience and the value you’ve generated during your career.

In other words, not only does he want to know what positions you have held in other companies, but he is interested in knowing what results you have achieved. In a nutshell, what have been your successes.

According to Wilding, it is advisable to start by thanking you for the opportunity you have been given with the interview and adding that you are very interested in working in that position.

The second step is summarize the high points of your professional career.

For example, “in the last five years I have been in charge of the development of technological projects in companies like X and X, whose market capitalization is greater than X”.

These types of phrases give the entrance to describe achievements being in those positions.

“While at such a company, I designed and executed a strategy that generated close to X amount of revenue in just X months.”

In this example, the essential thing is to make the result of your actions clear and not just describe your actions. But also, it is important that the results are quantifiable.

It is not enough to say that you were in charge of improving a process. What you must say is that your work was so effective that it allowed to achieve a specific result.

Finished listing the results of your achievements, you can refer to your skills from a more comprehensive point of view, explaining what you have learned to do in your years of experience.

Normally titles alone do not necessarily explain the importance of what you have achieved, nor do they show what challenges you managed to overcome.

At this point it is important to find out how stand out from the other candidates.

At the end you can add something more personal or fun.

One client, says Wilding, “told me at the end of the answer: ‘And, well, I’m the worst guitarist in the world.’ Those things, at the right time, can work well,” because they help you connect with the interviewer and mention a thing or two about your hobbies or family.

“What you should never do is make the answer too long”, dice Wilding.

The great challenge, he explains, is to tell everything that is important in less than two minutes.

And if you have summarizing skills, add, “Ideally, it would be all done in one minute.”

One of the worst ways to answer the question “tell me about yourself” is to go back in time and recount it chronologically, such as “I entered university in year X, then I changed majors and my first job was…”.

A timeless, chronological response is a recipe for getting out of the situation badly.

“Do not start with the beginning of your career, on the contrary, focus on the highlights of what you have done,” says the consultant.

In addition to the content, the way you say things is very important. Wilding points out that the tone of voice is key to demonstrating confidence and that it is worth rehearsing what you are going to say.

When we don’t know how to answer a question, the “bridge technique” can be very useful in a job interview.

Basically, it’s about turning the conversation the other way in a subtle way.

If they ask you about the mountains, and you really master the subject of the oceans, the fun is in looking for the most ingenious way to establish a connection between two topics that seem disconnected.

Make the bridge (which in English means “bridge”) is precisely to connect two topics to finally talk about what you want to talk about because it is an area where you handle yourself well.

“It took me a while to figure it out before I finally got it,” says Wilding.

The “tell me about yourself” is not the only question that can be challenging, he adds, especially when it is formulated at the beginning of the conversation.

Other questions for which it is also good to have some kind of answer prepared are, for example, Where do you see yourself in five more years? What makes you unique? Why should I hire you? Or what is your greatest weakness?.

Rather they are trying to find out what your way of dealing with something unknown is and what kind of reasoning you are able to do to deal with something new.

If they ask you “imagine that you have obtained this position. What would you do in the first 90 days of your term?”, they are probably not expecting you to have a detailed plan of everything you are going to implement.

But they are interested in your ability to analyze and the different scenarios that you can come up with with the little information you have.

In this type of case, it is advisable to quote How have you solved challenges in the past?

Although it is not the same context, it allows you to show that you have overcome obstacles and that, just as you did before, you can do it now.