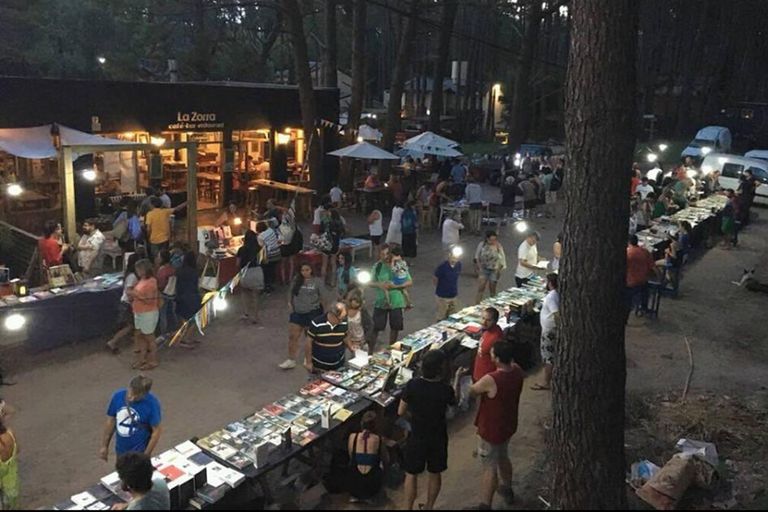 In Mar Azul: going from the beach to a night and street editorial fair


To go in flip flops, shorts and a pareo, from Thursday 20 to Monday 24, readers who spend the summer in the Villa Gesell Party can schedule a visit to Mar Azul, where (after the pause imposed by health restrictions in 2021) the sixth edition of the Fair of Independent Publishers of that locality. Writers and musicians will participate, and there will be books to choose from the catalogs of various labels, with the publishers themselves chatting with locals and tourists as night falls. In 2020, when the fifth edition of the “nocturnal, free and street” fair was held, as one of the organizers describes it, more than five thousand people attended. This year, while a boom in domestic tourism develops in the country, it is expected to break that record. The first edition was in the summer of 2017.

Pablo Franco is editor of La Flor Azul (based in Mar Azul) and co-organizer of the meeting meters from the Atlantic, on the wooded corner of Punta del Este and 35, along with La Zorra Cafeteria. “We hope that the public will join us like every year. It is a good program for tourists from all over the country who come to the coast. There are five nights of book presentations, readings, poetry, shows for children and live music”, Franco tells LA NACION.

Writers such as Cecilia Ferreiroa, Martín Glozman and Gloria Peirano will also be read, and titles with a French touch will be presented: one by the Marquis de Sade addressed to the republicans of his time and an essay on Jean-Jacques Rousseau. “As for the shows, Laila Farinola, Julie Álvarez and Roberto Farinola will sing, and Tomi Lebrero, Nayla Beltrán and Juan Martín Scalerandi will present a show about the feminist tenth and orality genres -Franco anticipates-. There will be a show for children: Other sukimukis: stories of restless women, based on the book collection Antiprincesas de Chirimbote by the artist Eugenia Caamaño. And Pablo Solo Díaz will present Yí mist. A history of WH Hudson in Uruguay, the beautiful album book by Juan Forn and María Domínguez [que fue pareja del escritor fallecido en 2021], illustrated by Teresita Olhaberry”. The fair is held near the “chosen land” to live and write by the author of Fridays.

“The fair grows year after year, and the flow of people is increasing, because it is free and the stalls are attended by the publishers themselves -adds Franco-. Labels from all over the country join us, and places quickly fill up.” Among the publishers that confirmed their attendance are Las Cuarenta, Sudestada, Mil Botellas, Blatt & Ríos, La Coop, La Flor Azul, Milena Caserola, Gourmet Musical, Beatriz Viterbo, Malisia, Eloísa Cartonera, Sigilo, Godot, Nebli, La Cebra and the Wild Federal virtual bookstore. For its realization, this year the Marazul fair has the support of the Ministry of Culture of the Nation and, as has been the case since the first edition, with the Culture area of ​​the Municipality of Villa Gesell.

At 7:00 p.m. Music for children with Pupek, a publisher committed to childhood, inclusion and the promotion of reading. Presents its Serenata de Papel collection and the book play in the library.

At 20. Presentation of French: try a little harder if you want to be republican, by Marquis de Sade, published by La Zebra. Presents Danimundo, author of the introduction, and Emilio Bernini.

At 9. Conversation between Mariana Docampo, author of Black Star (Leteo), and Vanesa Guerra, author of the language of the desert (Good view).

At 10 p.m. Laila Farinola, the singer-songwriter and artist from Geselina, presents The line of the birds, and other songs from his repertoire.

At 8:00 p.m. Frankie (The Blue Flower), by Daniel Villaverde, a novel about a boy who discovers the city of Buenos Aires and in it a world that is both wonderful and fearsome. Presented by the author and Marcela Alemandi.

At 9:00 p.m. Jorge Dorio presents The Evolution of October, his brand new book of Peronist poems, edited by Las Cuarenta.

At 20. Presentation of Subrogate, by its author, Natalia Peroni, Selva Almada and Ana Asprea. A novel that addresses the subject of surrogacy, published by La Flor Azul.

At 9:00 p.m. The Treetop. Readings with Mariana Docampo, Vanesa Guerra, Cecilia Ferreiroa, Martín Glozman and others (The Tree Cup is a platform for the management and dissemination of literature).

At 10pm. The singer and composer Tomi Lebrero performs a selection from his repertoire. Songs that feed on rock and folklore, in versions accompanied by guitar and bandoneon by the author himself.

At 6:00 p.m. Snack in the publishing sector, with Agustina Balduzzi, director of Promotion and Cultural Projects of the National Ministry of Culture.

At 19. Other Sukimukis: stories of restless women. Unipersonal of scenic narration in kamishibai about the lives of Juana Azurduy, Violeta Parra and Frida Kahlo, based on the books of the Antiprincesas collection of the Chirimbote publishing house. This show is supported by the National Endowment for the Arts.

At 7:00 p.m. Emilio Bernini, the author, and his colleague Marina Farinetti, present Rousseau’s method, a study on the Genevan author published by Las Cuarenta.

At 8:00 p.m. Roberta Iannamico introduces herself. Minimalist songs by the Buenos Aires poet and writer, who accompanies herself on the guitar.

At 9:30 p.m. The cellist and singer from La Plata, Morena Leza, covers songs that range from Latin American folklore to song French.