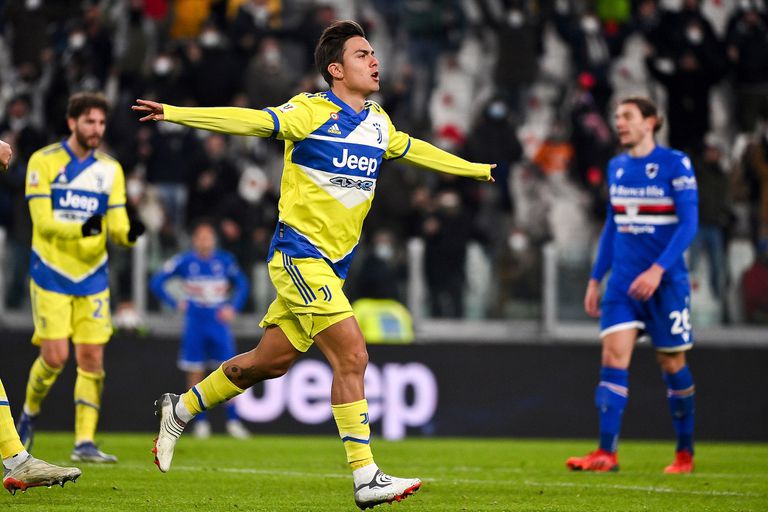 
With a goal from Paulo Dybala, Juventus thrashed Sampdoria 4-1 and got into the Italian Cup quarterfinals, in a match in which the Vecchia Signora showed a vast superiority.

The opening was in charge of the Colombian Juan Guillermo Cuadrado, with a low free kick, while Daniele Rugani increased the difference shortly after the start of the second half. Andrea Conti pulled one back for Sampdoria in the 63rd minute, but with a great goal from Paulo Dybala (67) and a penalty scored by Alvaro Morata (77), the “bianconeri” finished off the tie.

In this way, Massimiliano Allegri’s team is among the best eight of the “Coppa” and awaits the winner of the match between Sassuolo and Cagliari.

Juventus has eight wins in the last eleven games, while Sampdoria still hasn’t raised its head and accumulates six consecutive games without winning.

The “Jewel”, who started the game on the substitute bench and entered the second half, this time did celebrate the goal, unlike what happened last weekend, when he scored against Udinese, but he did not shout or celebrate his goal , and chose to remain silent looking at the leadership box, while walking towards the center of the field.

This occurs in a context in which Dybala’s future at Juve is in doubt, after the leadership imposed changes in the conditions to renew his contract with the club, which ends in the middle of this season.

Fifth in Serie A, nine points behind leader Inter Milan, and with one more game to go, the Bianconeri seem to have their only concrete chance of winning a title this season in the Coppa Italia, after losing to Inter just a few days ago. days in the definition for the Italian Super Cup.

In Tuesday’s match, it looked as if Juventus would advance without any problems, but Sampdoria got into the game with a cross from Tommaso Augello that beat everyone until it reached Conti, who allowed the ball to bounce before firing. However, Dybala secured the win three minutes later, taking advantage of a defensive error.

In addition, Ciro Immobile scored in the 106th minute to help Lazio advance to the quarter-finals, stage in which they will face Milan. The Rossoneri overcame Genoa last week. Both Lazio and Udinese had several chances in the regular 90 minutes. The home team had their best chance three minutes from the end of normal time, when Udinese goalkeeper Marco Silvestri saved a shot from Sergej Milinkovic-Savic and defender Destiny Udogie deflected Raúl Moro’s attempt on the next play. Udinese had their chance in extra time with Tolgay Arslan’s shot grazing the crossbar, but it was Immobile who ultimately made the difference.