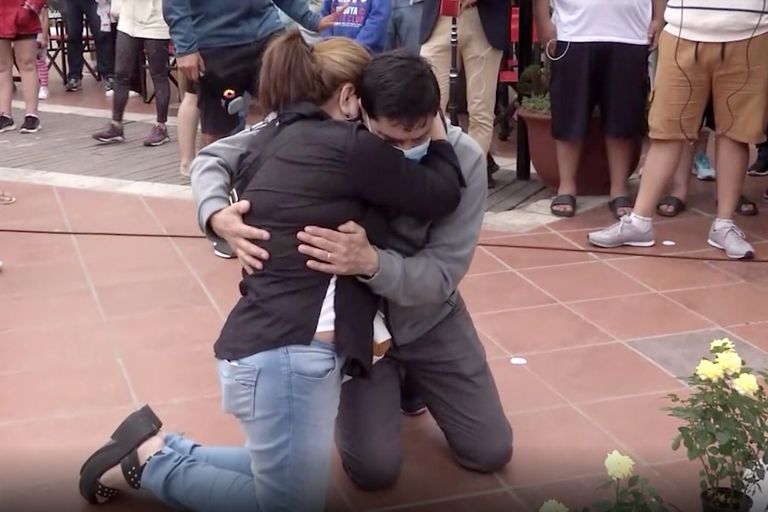 Le Brique, the place of the crime of Fernando Báez Sosa, between the posters with his face and an emotional act with the parents


VILLA GESELL (Special envoy).- The afternoon is gray in the city of Villa companion and coincides with the mood of a particularly sad day. For people who come to intersection of 3rd avenue and 102nd street, the posters with the image of Fernando Báez Sosa they do not go unnoticed.

The signs demand justice, are numerous and are displayed at the entrance of the closed Le Brique bowling alley. Some watch them as they pass. Others stop to contemplate them in silence. Today Two years have passed since the brutal murder of the teenager and the case continues impregnated in the memory of society as the first day.

Since the summer of 2020, the dance venue where a gang unleashed a deadly cataract of punches and kicks on Fernando has not reopened its doors. It looks abandoned. A small stage was set up nearby for the commemorative act which will take place at 19 and from which Silvino Báez and Graciela Sosa will participatethe boy’s parents.

“This is the second time that we have traveled to Villa Gesell, but the first time that I am going to be in the place where my son was murdered. Stepping on it will be very hard and only I hope to be strong for that moment”, Fernando’s mother anticipated THE NATION and completed: “The damage they did to us is irreparable. We lost the best thing we had in our lives, our son.”

Hours before the event scheduled for this afternoon, the moment that Graciela was talking about arrived and the image was heartbreaking. In silence, she and her husband approached the tribute erected on the sidewalk opposite the bowling alley, where there are also images of the teenager, flowers and signs demanding justice. Then they both knelt down, hugged each other and cried inconsolably. Witnesses, friends and family briefly applauded them. Then the silence was total.

“I ask you to come with me to pray a little for Fernando’s soul, so that he can rest in peace”, told them Grace those present before reciting a prayer. Later, he made the first statements on the anniversary of his son’s crime: “Fer is always present in our hearts and being in this place where he was last in life is very painful. I don’t wish it on any mother.”

For its part, Silvino He expressed: “We are not having a good time, we have been like this for two years trying to ask for justice and drawing strength from where there is none. The two of us coming here helps us to gain a little strength, to be more whole so that when the trial comes we will be standing there. It’s not easy at all, every day that goes by is worse and we miss Fernando even more: he was everything to us”.

The judgment to which Fernando’s father alludes has start date January 2, 2023. So, in the courts of Dolores, they will sit in the dock Luciano Pertossi, 20 years old; Ciro Pertossi, of 21; Lucas Pertossi, of 22; Ayrton Violaz, of 22; Máximo Thomsen, of 22; Enzo Comelli, of 21; Matías Benicelli, 21, and blas cinalli, of 20. The eight will face charges for “doubly aggravated homicide by treachery and by the premeditated competition of two or more people”, a crime that provides for the life imprisonment.

At 19, in front of Le Brique, Silvino and Graciela will make statements in the framework of a interreligious act in memory of his son, in which representatives of five religions will participate: the Apostolic Catholic, Anglican, Judaism, Muslim and Mormon. Each leader will speak and present a religious quote or reference for “peace, justice and against violence”.

“The motto will be ‘Love for all, hate for no one’ and we will pray for Fernando and for peace, to condemn violence and hatred”, anticipated its organizers.