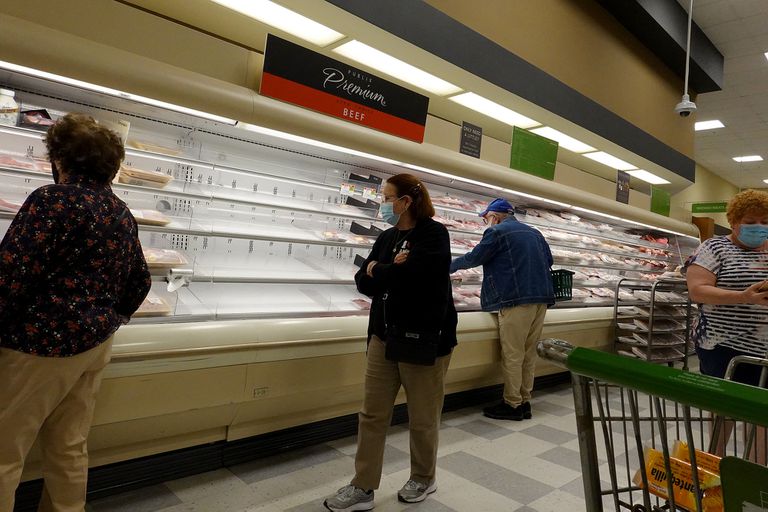 Shortage in supermarkets in the United States: what are the products that have the greatest lack of stock


WASHINGTN.- For months now, supermarkets in the United States have seen a decrease in the products on their shelves due to the fact that supplies take time to arrive. The advance of the omicron variant through North American territory and also the winter storms have simply waged war on the supply chain, and items like pet food, toilet paper, chicken and even cream cheese are finding their way into American homes.

The CEO of the Consumer Brands Association, Geoff Freeman, dijo al The Washington Post that during the first two weeks of 2022 there have been more casualties in jobs than in all of 2020. “Add to that 80,000 truckers nationally, and another 10 percent of workers that are absent from food manufacturing facilities, it’s putting a lot of pressure on the system,” Geoff said. For them, logistics is one of the main reasons why users do not find certain products. But, Which ones are in short supply?

Mainly the northeastern United States is being affected by the lack of products such as eggs, chicken and beef. Supply is low…and demand is high. As the CEO of the United States Refining Company, John Catsimatidis, told FOX Business, “ómicron is charging its price at different levels of the chain (…) and when sick people are called, there are interruptions in the system.” He also added that these could continue until February, and that even the increase in chicken prices could be used as a strategy by companies to lower demand.

In fact, the lack of chicken does not only affect supermarkets. Fast-food chains such as Australia’s KFC had to remove some items from their menu while their supplier, Ingham’s, was able to re-establish the supply chain.

For several months in different parts of the United States it has become more complicated to find formulas Enfamil, Similac, Gerber, among other brands, states the Wall Street Journal. According to the American media, the owners of the stores that distribute them and the manufacturers have admitted that there are stock problems. Although they agree on that, there have been mixed statements: the vendors say that the problem is due to the lack of supplies, while the manufacturers say that it is the chains that do not put their products on the shelves.

Krishnakumar Davey, president of analytical strategy for IRI, retail researchers, told the Wall Street Journal that some of the 10 largest supermarket chains in the United States had more than 20% out of stock of baby formula before the end of the week of January 2.

Food for domestic pets has also had problems with its manufacture and distribution. In the United States and according to the television network FOX Business, during the pandemic pet adoptions increased, which has also meant an increase in the demand for food, who are also buying in larger quantities. According to the consulting firm Nielsen, supermarkets grew lSales by 6.9% during the first 52 weeks of 2021.

There is also the “packaging problem”. The United States also faces a shortage of aluminum, therefore, pet food companies cannot can certain products, such as wet dog and cat food. All this without counting on the lack of chicken, and other sources of protein such as beef. The Pet Food Institute of the United States told USA Today that “shortages are affecting the movement of ingredients and finished products.”

In October 2021, already the American supermarket chains such as the “King Kullen”, based in Hauppauge, New York, were concerned about the sudden shortage of boxed juices, according to Newsday, a fundamental part of school snacks. On Long Island, the situation was the same. Maura O’Brien, a spokeswoman for Stop & Shop, a large supermarket chain, told the New York Post that “like many retailers, we are seeing shortages of juice boxes and bottles, as suppliers experience labor challenges due to the Covid- 19″. When consulted brands such as Capri-sun and Kool-Aid, they responded to the American media that they hoped to replenish their products soon, “Which should help with assortment and availability,” responded one of the spokespersons.

Patrick Penfield, a professor at Syracuse University’s Whitman School of Management, he told USA Today that cream cheese and some imported foods were among the products that were in short supply on the shelves. And the cream cheese thing has been widely spread on social networks, since it is one of the favorite accompaniments for North Americans. Although in December the lack of stock was felt among customers, from brands such as Kraft and Schreiber Foods, they told the American publication that they would increase their production, but that they had to fight with the demand due to cuts in the supply chain.

Large American chains like Costco limited the amount of products each customer can take home, as is the case of toilet paper, in order to avoid the stock break that occurred at the beginning of the pandemic. Others have opted to put more of the products they have in stock on the shelves, while they put in a more parceled out way those with supply problems in order to prevent people from “hoarding” items you don’t need.