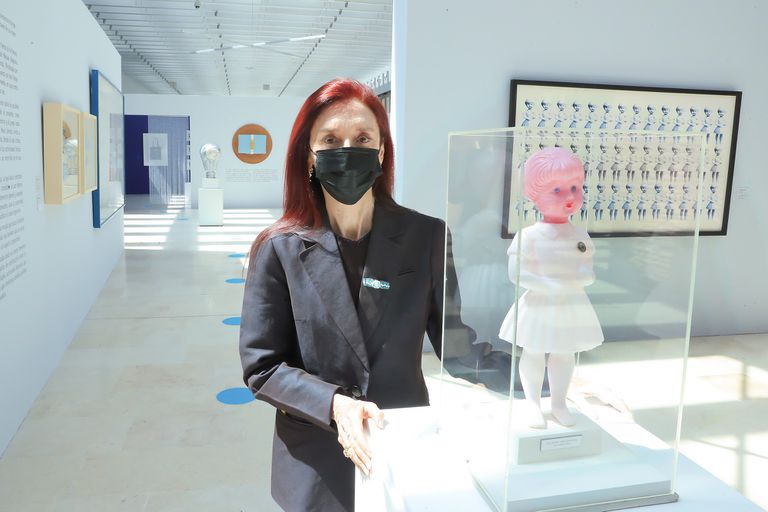 
“The techniques I use in my works are linked to my own childhood,” says Nora Iniesta (Buenos Aires, 1950) to LA NACION in the huge hall of the Bicentennial Museum (or Casa Rosada Museum), where she exhibits more than seventy works, all light blue and white, in the sample standard bearer. “Those techniques that I use are linked to my own childhood, with the first techniques learned, basically from kindergarten, like cutting, gluing, drawing, and then embroidery, sewing, weaving. They are all linked to that early childhood.” The first work that visitors to the Bicentennial Museum – located behind the Casa Rosada, where a gigantic flag flutters – encounter is another enormous national insignia made with more than eight thousand rastis. For the artist who recreates national symbols, the work represents the union and reunion of Argentines, a desirable goal if there is one in a “cracked” society.

The Casa Rosada Museum, which depends on the General Secretariat of the Presidency of the Nation and was inaugurated on May 24, 2011 during the presidency of Cristina Fernández de Kirchner, has a collection of more than twelve thousand pieces, among which stand out documents, the famous mural by the Mexican David Alfaro Siqueiros, works of national and international art, furniture, objects that belonged to the Argentine presidents and works of decorative art. It is also one of President Alberto Fernández’s favorite venues for his official acts and announcements. standard bearer is the first temporary exhibition of a contemporary artist in the institution that directs, since the beginning of 2020, the lawyer and journalist Andrea Rabolini.

The opening of the exhibition was scheduled for June 20, 2020, within the framework of the “Belgranian year” celebrations, to commemorate the 250th anniversary of the birth and the 200th anniversary of the death of the great Manuel Belgrano. The arrival of the pandemic in March 2020 frustrated that and other tributes to the creator of the national emblem. “For this reason, the theme and the title of the exhibition -says Iniesta-. We bring together a set of works from the last fifteen years”. Some were provided by companies and collectors, with which the artist was reunited with them after a while. The most recent works of standard bearer were made in 2020: a “Belgranian series” of one hundred collages with old postcards, school figures, drawing pads and glossy paper, some of which are exhibited on a panel.

In addition to creating the National Flag, Belgrano was one of the greatest promoters of public education in Argentina, and in her materials and themes, the artist pays tribute to this core of the hero’s ideology with the presence of a character created by Iniesta. “We start from the emblematic Argentine girl, proud with her white apron and her rosette on her chest,” he observes. The girl officiates as the golden sun of the National Flag and multiplies in collages, assemblies and a gigantography. A great work made with bibs (with embroidered male and female names) projects meanings from the past to the future.

One hypothesis raised by the sample is that love of country is born and transmitted in the home. This domestic aspect -outstanding and also linked to childhood and school- takes shape in collages made with wooden plates and trays; tablecloths, plastic placemats and kitchen aprons (with rosettes); embroidery, rugs and sewing thread. “It is important when someone gives me something”, reveals the artist in reference to the materials of her works, which come both from the hands of her mother and from friends and from her travels around the world (in the series looking east) or the fairs of his “small country”, the neighborhood of San Telmo, where he has lived for more than thirty years. “They are all things found and valued and then become a flag.”

Regarding the color palette that predominates in the Bicentennial Museum, Iniesta points out that “there is not a specific light blue or flag blue, but rather what is close to being and that each one has in mind”. The social fabric weaves its symbols. Many of the flagship works that are exhibited in standard bearer They were rebuilt in different places, among others, the José Antonio Terry Museum, the Salta Museum of Contemporary Art, the House of Tucumán, the National Library of Rabat (Morocco), the Argentine House in Kiev (Ukraine) and the Recoleta Cultural Center .

For standard bearer A team made up of the curator of the Casa Rosada Museum, Adriana Mare, worked on it, and the script for the exhibition was in charge of Mariela Beker, Walter Richardi and Marcela Pupo y Spencer. The assembly design was carried out by Javier Jusid, who “built” a house behind the Casa Rosada. “The exhibition standard bearer proposes to reflect on the possible ways of building a flag from the present, as a way of rethinking ourselves -one of the room texts reads-. Appealing to memory and play as a means of discovery and inspiration, Nora Iniesta invites us to remember and build new ideas of the homeland. From the most intimate everyday life of homes, passing through the typical activities of the school stage, his works propose a journey in which we can recognize ourselves”.

To what extent is Iniesta’s work, which is appreciated by children and young people as well as adults, linked to the future? “I envision the future as a wide sea of ​​possibilities not yet explored whose matrix, whatever it may be, is latent within me -replies the artist-. It is that meeting between both parties, what I am, what I bring and the immense possibility of the outside, in that meeting, in that conjunction, it will be”.

standard bearer, by Nora Iniesta, at the Bicentennial Museum (Paseo Colón Avenue 100), can be visited on Saturdays and Sundays, from 10 a.m. to 5:30 p.m., until March 13.