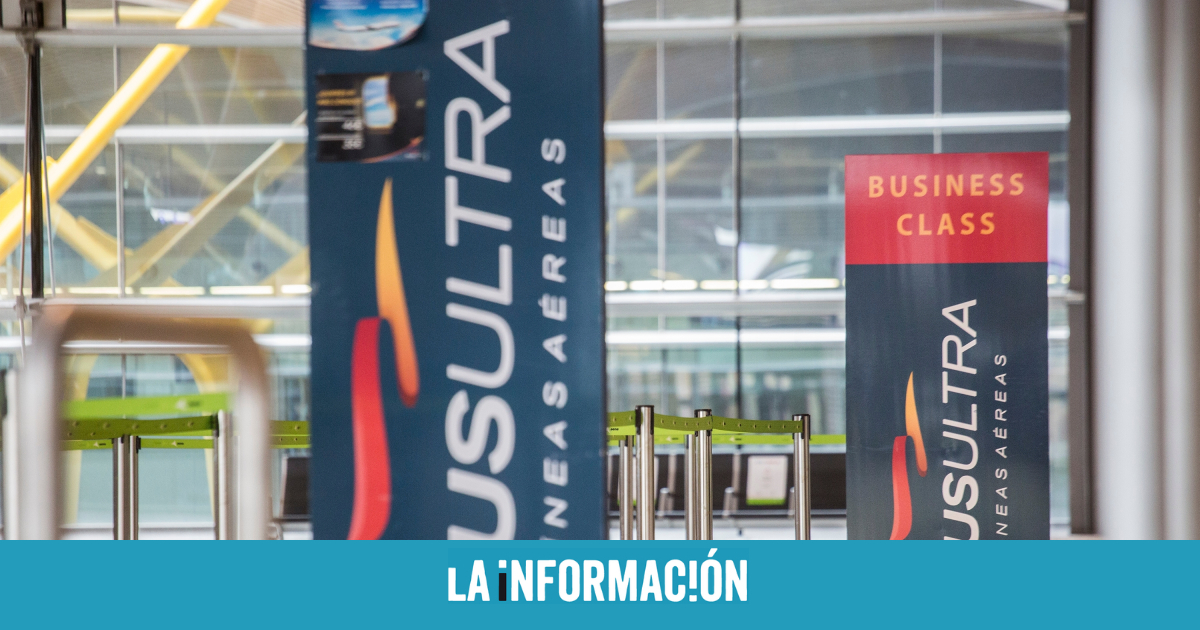 
The experts who wrote the report commissioned by the court and those who signed the one provided by More Ultra have confirmed their conclusions in the confrontation held this Tuesday before the judge which investigates the alleged irregularities in the granting of the public aid of 53 million euros granted to the airline, for which reason the differences on the patrimonial situation of the company.

Legal sources present at the interrogation have assured Europa Press that the experts have testified for more than three and a half hours and have answered questions from Judge Esperanza Collazos, the State Attorney’s Office, the Prosecutor’s Office and the popular accusations exercised by Clean Hands, PP and Vox. The same sources have highlighted the “peaceful” nature of the confrontation which, as they have specified, has mainly dealt with the participating loan that the airline received from Panacorp, the sale of one of its planes and the financial provisions of the company.

Within the framework of the diligence, the independent experts have insisted that Plus Ultra was in “cause for dissolution” at the time of receiving the aid approved by the Executive, according to several sources consulted. Specifically, they have ratified the 499-page document in which they explained that there were “more than reasonable doubts” on what the company’s financial situation was as of December 31, 2019 and, consequently, on compliance with the essential conditions for the granting of public aid through the State Society of Industrial Participations (SEPI).

Likewise, they have underlined the existence of the participating loan with the Panamanian entity Panacorp, signed on December 22, 2017, by amount of 7.5 million dollars, equivalent at the time of signing to 6.3 million euros. And they have warned of the provisions derived from two legal proceedings related to Plus Ultra. For their part, the experts from Deloitte and Daiwa Corporate Advisor -signatories of the report provided by the airline- have maintained their conclusions that the company “I was not in crisis” and gave a favorable opinion to grant the aid.

Throughout the entire procedure, the airline has insisted that it complied with the processes required for the granting of public financing, without which it would not have been able to continue operating after the impact of the pandemic on its business. In addition to the expert reports, it provided a report prepared by the State Aviation Safety Agency (AESA) and the General Directorate of Civil Aviation, who supported the granting of the financing.

The legal secretary of Vox, Marta Castro, has assured in statements to the press that it has been a “an essential test” and that, in his opinion, “it has been very interesting to see the contradictions” between the two teams of experts, since there have been “many nuances” and “accounting interpretations”. Castro has announced that they will request the declaration of the legal representative of Plus Ultra and also of those responsible for SEPI. “Without these statements it seems to me that the investigation is, perhaps, incomplete. And we shouldn’t make rash decisions“, has said.

From the formation led by Santiago Abascal they have insisted that the airline disguised its situation in order to access public aid and have also recalled that there are “personal ties” between Plus Ultra and the government of Nicolás Maduro. “That is something that we believe must also be evaluated”, has added.

Lawyer and prosecution ask for the file

The confrontation takes place after the State Attorney requested the dismissal and file of the investigation “as there is no evidence of the commission of any allegedly criminal act”. The State lawyer Rosa María Seoane, in a brief to which Europa Press had access, said that it could “be concluded that the expert report does not provide any element that could, even indirectly, lead to doubt the situation of ‘company not in crisis ‘ of Plus Ultra at the end of 2019, and much less remote indications of constitutive element of any criminal type”.

The Lawyer insisted that the “technical discrepancy exposed in the report of the judicial experts” it was not enough to assess, “even tentatively”, any excess on the part of SEPI to grant the aid. The Madrid Public Prosecutor’s Office also asked the Court to archive the procedure, considering that there were no “blunt elements” that would allow changing the criteria set forth by the Public Ministry in its previous writings. After the confrontation on Tuesday, the judge will have to decide whether to continue with the investigation -as the accusations request- or if he agrees to the file -as the Prosecutor’s Office and the Lawyers demand-.