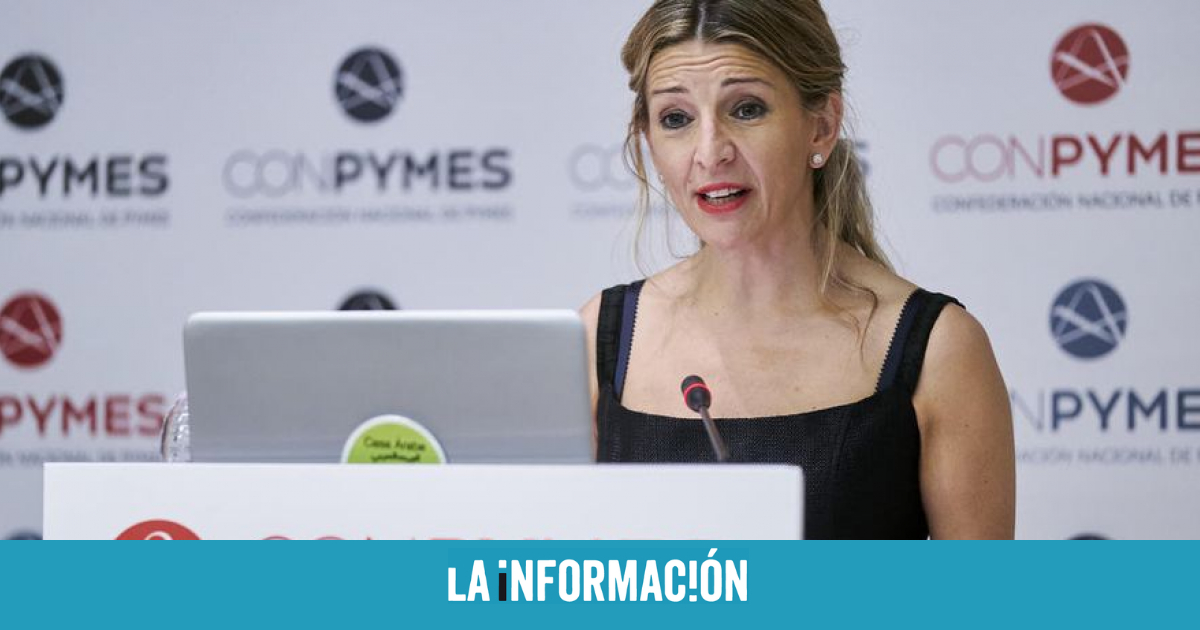 
The National Confederation of SMEs (Conpymes), the new employer of small and medium-sized companies and self-employed workers that was born in May 2021 and made the CEOE nervous, wants to sit at the table of social dialogue. The organization chaired by José María Torres considers that it has sufficient representativeness to debate with the Government on matters that affect practically the entire national business fabric and for this reason they have asked Yolanda Díaz to participate in the negotiations that are now monopolized by CEOE, Cepyme, CCOO, UGT and the main organizations of self-employed workers (ATA, UPTA and UATAE). However, for the moment, the Ministry of Labor denies them access to the tables, so Conpymes lawyers are already preparing the legal battle against Díaz.

Conpymes came on strong and caused enormous anger in both CEOE and Cepyme. The partners of the two most representative business organizations in the country did not hide their rejection of the Government’s explicit support for the new employers’ association that was born in an attempt to rise up as an alternative to Cepyme, the organization chaired by Gerardo Cuerva and dependent on the CEOE, which pilots Antonio Garamendi. In private they were upset by what they considered a betrayal by the Executive, since the presentation ceremony was attended by none other than Vice President Yolanda Díaz and President Pedro Sánchez’s wife, Begoña Gómez, as director of the Extraordinary Chair for Competitive Social Transformation at the Complutense University of Madrid.

In the CEOE and in Cepyme, the presence of both was interpreted as an endorsement of the new rival confederation, which comes from the Pymes Platform and, after the statutory change promoted by its vice president Antoni Cañete -in turn president of the Catalan employers’ association of pymes (Pimec)- started under the leadership of the Aragonese businessman José Luis Roca and is now chaired by José María Torres. But the initial idyll between Díaz and Conpymes did not last long. The new actors of the employer board demanded from its configuration a space in the social dialogue tables, but the Ministry of Labor denied it because it considered that they did not have sufficient representativeness or, rather, because they did not have formulas to account for the associated companies. .

Conpymes took refuge in the sixth additional provision of the Workers’ Statute, on the institutional representation of businessmen, which establishes that “for the purpose of holding institutional representation in defense of the general interests of businessmen before the Public Administrations and other entities or bodies of a state or autonomous community nature that have it planned, it will be understood that enjoy this representative capacity the business associations that have the ten percent or more of companies and workers at the state level“. The new employers defended that, with more than two million associates, it exceeded that threshold, but Labor alleged difficulties in knowing its exact representativeness, something that, in the opinion of Conpymes, is inconsistent with the fact that CEOE and Cepyme do are considered sufficiently representative to participate in social dialogue.

The argument on which the Ministry of Labor relies to deny Conpymes access to the social dialogue tables alludes to the eternal debate on the representativeness of business and trade union organizations (with examples such as those of the ELA and LAB unions) and the difficulty entailed by the very formulas included in the law to determine whether or not a certain quota is met. But the new employers believe that the criteria are clear and that in a country where 99.8% of the business fabric are SMEs, it is not understood that they do not have independent representation at the social dialogue table. “UATAE is recognized as formally representative of the self-employed; COAG, of agriculture; Fenadismer, of transport; or Pimec in Catalonia… it makes no sense that an employer with all of them is not considered representative in social dialogue,” they settle.

But the Ministry of Labor is dawdling with this matter and the Conpymes lawyers have already set to work to transfer it to the national courts and raise the legal battle even to Europe. “If they do not recognize this right, we will fight it in court,” they warn. Sources aware of the state of the situation reveal that, privately, Labor has told members of the new SME employers’ association that their incorporation into the social dialogue would be reasonable, but they have not expressed a firm commitment in this regard because “any government is uncomfortable stir the the status quo of the CEOE in its monopoly of business dialogue”. “It is the will of the Government, both Moncloa and the Ministry of Labor, but they do not want more problems with the CEOE, so the issue is in a loop”, conclude the sources consulted .

If no understanding is reached, the legal battle can be long. The precedent can be found in Catalonia, where the Foment del Treball and Pimec employer associations reached an agreement on representativeness after a decade of litigation. The origin of the dispute, which gave rise to several contradictory court rulings, was that Pimec argued that Fepime (a member of Foment and Cepyme) was not a representative entity and requested a percentage according to business reality. The agreement, signed in 2019, was then described by the Pymes Platform (now Conpymes) as “historic”, for its ability to contribute “to a better defense of inclusive capitalism, giving greater preponderance to SMEs and the self-employed in Catalonia” and “setting the bases and serve as a reference for the achievement of similar processes in Spain and the EU, which act as an instrument for the expansion of inclusive capitalism, embodied in SMEs and the self-employed, which contributes to improving the productivity of the economy throughout the EU”.

In a conference held this Monday on the labor reform and organized by Conpymes, Torres insisted on several occasions on the need to join the social dialogue as a representative organization of SMEs and even claimed it to the Secretary of State for Employment, Joaquin Perez Rey, who attended the closing of the act as a guest, but avoided entering fully into the matter. Even Rosa María Virolés, magistrate of the Fourth Chamber of the Supreme Court, described as “unfortunate” that 99.8% of companies are not represented in social dialogue. But Yolanda Díaz’s number two limited herself to committing to keep regular appointments with the new bosses, as with other organizations outside the institutionalized social dialogue, something that for Conpymes is not enough. “If the government does not recognize this right, we will go to court”, they insist.