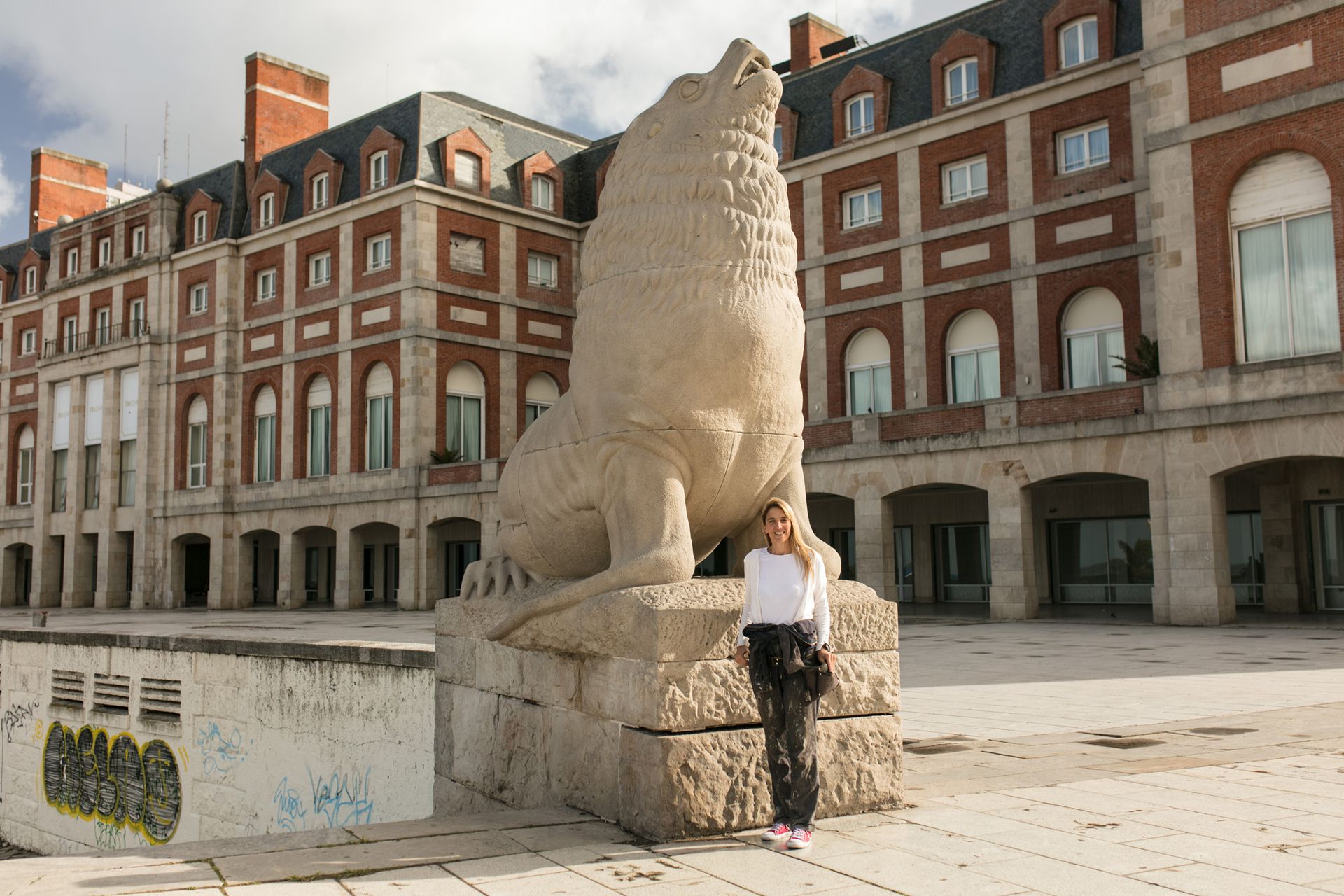 The official who puts the body to the sculptures of Mar del Plata: she restored a hundred in less than seven years


When Costanza Addiechi began to restore the sculptures, fountains and statues of Mar del Plata, the journalistic notes began to title “the guardian”, “the protector”, “the art doctor”. People were shocked to see her jump out of bed at 5:30 in the morning because someone was harassing her on Twitter to let her know that a mailbox in the city’s old postal system had been vandalized. Or to start a tireless network crusade to recover a cast iron sculpture of more than 100 years that adorned the Plaza San Martín.

With time, the people of Mar del Plata they got used to seeing her inside an empty fountain, dressed in overalls and a fanny pack, spending long days under the inclement sun of summer, or facing the icy wind of the sea in winter. The one that works alone and in silence outdoors, on a crane or a ladder. The one who drives through the city in a small white car in which she keeps all her tools: brushes, scalpels, tweezers, paint guns… That’s her: a woman with guts who Although he has offers to work in different coordinates of the planet, he chooses to stay in his hometown, restoring the statues in the squares where he learned to ride a bicycle.

In formal terms Costanza Addiechi is Director of Restoration of Historical Monuments of Mar del Plata for six and a half years – three managements kept her in her position – and responsible for having restored in this period half of the 200 listed monuments of historical importance, from the legendary Fioravanti wolves at Bristol Beach to the lampposts with marine motifs on the old French promenade. Also to sustain a permanent work of awareness about the local heritage, which means that today Mar del Plata only has between five and seven acts of vandalism per year, a statistic that fills her with pride.

Among so many possible trades and professions in this world, how do you decide to be a restorer? How does that desire arise? “I always say that I was born a restaurateur. As a girl I was not interested in the usual games, played to hit what was broken, at 14 I began to investigate restoration, read about it and put it into practice. I formally studied Fine Arts,” he says. The beginning of everything was a piggy bank that his brother blew up with a ball, but the background can be summed up in this sentence that he will say at some point in the interview in a cafe in front of the Casino. “My job is to rescue beauty from oblivionThat’s what I like to do.” After graduating, he left with a scholarship to Florence, a kind of amusement park for a restorer, where he worked with different teachers and continued his studies.

Although Mar del Plata, where he finally decided to settle down and work, also has its own. “We have a very rich historical heritage, most of the sculptures today are located in the seven historic squares according to the original plan of 1874″, he says.

There are two major sculptural groups of value. On the one hand, a first consignment that arrived from Florence in 1903 to decorate the disappeared General Paz coastal park, designed by Carlos Thays and which extended from Rivadavia street to Torreón de Monje. The pieces were made of Carrara marble and were displayed among merry-go-rounds, bridges, cricket fields, confectioneries and an amphitheater for 700 people. In 1909 another large consignment arrived, this time from France, more precisely from the famous Val D’Osne foundry., pioneers in industrial art. They were large pieces of wrought iron that were accommodated in the South Esplanade, the sector that included from Torreón to Playa Grande. The Triton, the Venus de Milo, Woman Bathing or the Triumph of Light, in Carrara marble, are some of the most famous pieces. But Costanza cannot choose just one: “I fall in love with each sculptural piece, I know each one of its ailments and pathologies”.

However, one of the jobs that gave him the most rewards was the restoration of 19 lampposts with marine motifs that for 30 years illuminated the beautiful French promenade that Mar del Plata had between 1913 and 1940, a symbol of the Belle Epoque, and that currently make up the Paseo de las Farolas in Plaza Miter, the same one where Costanza learned to ride a bicycle. They are pieces cast and assembled in Buenos Aires and designed by the French architect Luis Jamin in which seahorses, snails, turtles, starfish, nets, jellyfish, algae and crabs, among other marine motifs, stand out. “The promenade was inaugurated four years ago and it was never vandalized,” says Costanza proudly, knowing that much of his work, perhaps the most important, is raise awareness of heritage. “When people see care, they care.”

Costanza usually organizes guided tours and talks for kids, locals and tourists with the intention that they know the history behind each lamppost or ciborium that adorns a square and that they can feel them theirs. “You can only take care of what you know and value. There are things that are overshadowed by ignorance, ignorance makes invisible”.

For this reason, when on April 30, 2021, a cast iron sculpture from Val D’Osne disappeared from Plaza San Martín la Sirena, the entire community became involved in the campaign to recover it. The news went viral and in a few days they found it. Costanza, the same one who had fun since she was a girl hitting what was broken, wept with emotion at that moment.

Although today it is almost zero, in the distribution of vandalism the two wolves of the boulevard are the ones who lose out. The iconic spot on the boulevard, the place where tourists line up early to get their postcard, is also the place par excellence to organize protests. The last time, one of them was bathed in pitch and Costanza spent two weeks on a scaffolding with a scalpel in hand so that the 1940s sculpture would recover the nobility of the original Mar del Plata stone. “Luckily it was winter and the tar could not penetrate the stone, it remained on the surface.”

Although he has his own workshop or also works in the sheds of Emvial – the Road and Lighting Entity of the Municipality of General Pueyrredón – he says that there is no place where he feels better than in a square. “I have the privilege of working in what I like: it’s cold and I don’t realize it, it’s hot and neither. Nowhere in the world am I happier than in the square”.