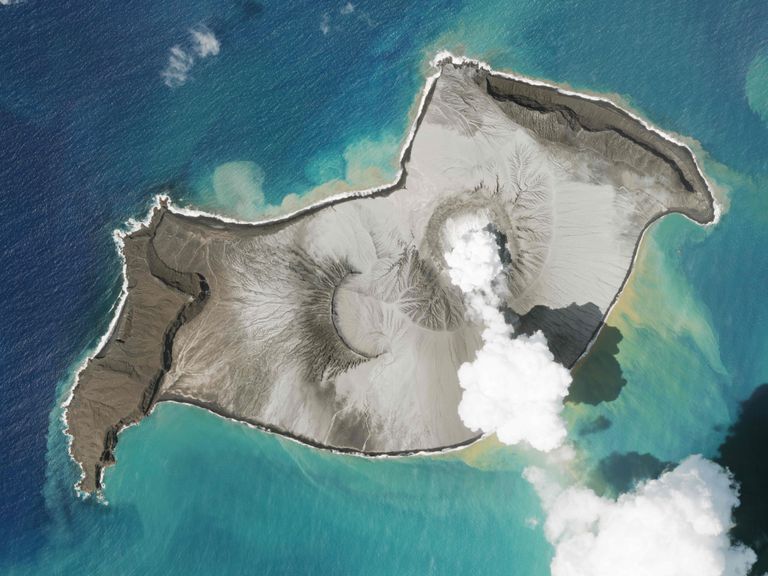 Tonga volcano: what is the Pacific “ring of fire” and why the eruption caused tsunamis even in the United States


WASHINGTON.- The shocking eruption of an underwater volcano in the Pacific Ocean near the islands of Tonga, caused a tsunami with waves and rising water levels around the world, flooding ports and forcing the closure of beaches and the activation of contingency plans from Japan to California.

According to scientists, the Tonga volcano can produce an explosion of these dimensions once every approximately 1000 years.

The volcano Southerners erupted several times in recent years and is part of the so-called Pacific “ring” or “belt” of fire, a chain of some of the most active volcanoes on the planet.

In fact, what just happened could be just the beginning: volcanologists and officials warn that we may be in for several weeks or even years of huge volcanic instability.

The magnitude of the eruption has not yet been officially determined, but the column of gas and ash reached 30,000 meters high, which reveals that the explosion was “very powerful”says Heather Handley, a volcanologist at Monash University, Australia. The shock wave and resulting tsunami were felt as far away as Alaska.

Shane Cronin, a volcanologist at the University of Auckland who has been studying Tonga’s volcano for years, says Friday’s eruption “It can mark the beginning of a period of great volcanic agitation that can last several weeks, or even years”. According to Cronin, everything seems to suggest that the volcanic caldera, a large oven-shaped hole that forms when a volcano erupts and collapses, “has awakened”.

“After analyzing the chemical aspects of past eruptions, we believe that the small eruptions reflect that the magmatic system is slowly building pressure and preparing for a major event,” says Cronin. “It remains to be seen if this has been the climax of that process.”

Geological deposits from previous eruptions indicate that these episodes that occur once every 1000 years “they involve several separate blast events,” says Cronin.

The explosion was powerful enough to generate a tsunami of several meters in Tonga and triggered tsunami warnings in Hawaii, Alaska, British Columbia and much of the west coast of North America, including the states of Washington, Oregon and California.

A 1.2 meter rise in water levels was seen in Port St. Luis, California, and Arena Cove, California saw a 1 meter jump. In Crescent City, California, a peak of 80 centimeters was recorded and in King Cove, Alaska, the tsunami was almost one meter.

Experts from the National Weather Service in Anchorage and the University of Alaska Fairbanks confirmed that the rumblings heard in that state on Saturday morning came from the volcano: that implies that the sound traveled more than 8000 kilometers.

Volcanic eruptions generate tsunami waves due to the atmospheric and oceanic impact that occurs at the time of the explosion.. The tsunami can also be triggered by underwater landslides, or when the “magma chamber”—the lava reservoir of the volcano—empties and the slopes and crown of the volcano collapse inward.

About 5% of the tsunamis recorded on the planet were due to volcanic eruptions, according to Andrew Gissing, an expert who was involved in the development of Australia’s tsunami warning system after the 2004 Indian Ocean tsunami. That devastating tsunami, caused by a magnitude 9.1 earthquake off the coast of Indonesia, claimed 230,000 human lives in Indonesia, Sri Lanka, India, Thailand and nine other countries.

In modern history, One of the deadliest examples of a volcano-triggered tsunami is the 1883 disaster in Krakatoa, Indonesia.. The volcano collapsed and literally sank into the sea, causing a tidal wave almost 40 meters high, enough to bury a six-story building under water. The Krakatoa disaster destroyed 300 cities and towns and claimed 36,000 lives.

The Pacific “ring” or “belt” of fire stretches in a horseshoe shape from the southern tip of South America, along the west coast of North America, through the Bering Strait, and from there to Japan to New Zealand. That belt marks the point of contact of the Pacific Plate with the many tectonic plates that surround it.

The United States Geological Survey (USGS) describes that ring as “the area of ​​greatest seismic and volcanic activity in the world”.

Among the most resounding eruptions that occurred in the Ring of Fire during the 20th century, the eruption of Mount Pinatubo in the Philippines in 1991 stands out, which launched fine ash and gases into the stratosphere and generated an immense volcanic cloud that went around the world. .

Andrew Tupper, natural disaster consultant and former director of the Volcanic Ash and Tsunami Warning Center in Darwin, Australia, says that according to NASA satellite data, the Tonga eruption reached almost 32,000 meters in altitude, one of the highest clouds on record, only below the 40,000 meters that the Pinatubo eruption would have reached in 1991.

The most powerful earthquake on record was the magnitude 9.5 earthquake that struck Valdivia, Chile, on May 22, 1960., also within the Ring of Fire. More than 1,600 people died in the disaster, most of them victims of the great tsunamis that swept the coasts from Chile to the Pacific and the United States. A tsunami from that earthquake reached Hawaii, where it killed 61 people and caused enormous damage.

Technically, Hunga Tonga is classified as a submarine volcano, but it consists of two small uninhabited islands, Hunga-Ha’apai and Hunga-Tonga. Before the eruption the cone of the volcano was about 90 meters above the water level, but under the waves lies a huge volcano, about 1,700 meters high and 20 kilometers wide.

The most active volcanic systems on Earth are underwater, according to Oregon State University. The magma and lava that erupt from those volcanoes create the boundaries of new oceanic plates and supply heat and chemical elements to some of the most exotic and rare ecosystems on Earth.

Most submarine eruptions occur in the depths and do not disturb the surface., with lava rivers running along the ocean floor. However, there are hundreds of islands around the world, from Iceland to the Asia-Pacific region, that were created as a result of volcanic eruptions.

In the world there are about 1,350 potentially active volcanoes, according to the USGS.

Among the most recent eruptions, it is worth mentioning that of the volcano of La Palma, one of the Canary Islands, which poured rivers of incandescent lava on the houses on the slopes and released a column of dense black smoke that forced the evacuation of some 5,000 inhabitants of the zone.