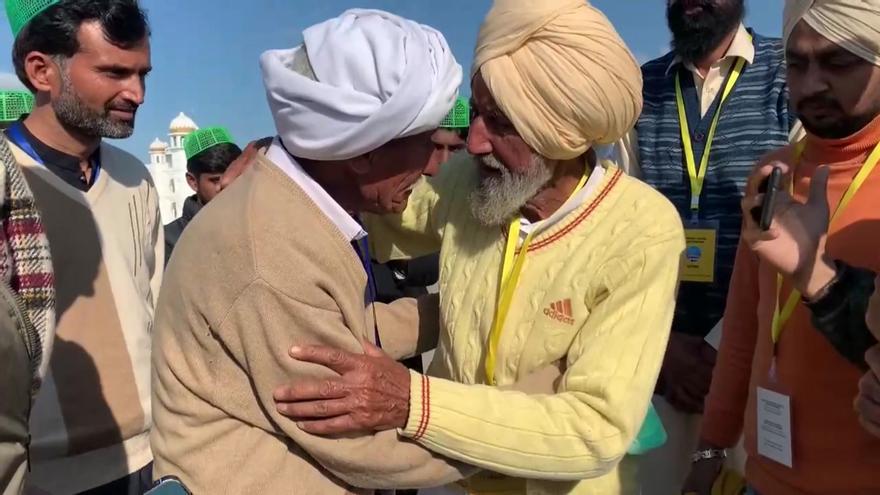 Two brothers meet 74 years after the partition of India


Of the brothers and sisters from ten and two years separated in 1947 during the dramatic partition of the Indian subcontinent, staying one in india and the another in pakistan, until 74 years later, an online campaign managed to get them to meet again. Now the elderly Muhammed Siddique and his younger brother Muhammad Habib expect a visa allow the long-awaited final reunification.

“Enough of the tears, we are finally together again,” Habib told his older brother, who was crying as they embraced in the punjabi province, at northern pakistan, without being sure if, after that reunion, they could meet again.

Its history goes back to august 1947, when after 300 years of presence in the Indian subcontinent, the British left the “jewel in the Crown” split in two: on the one hand Hindu-majority India, and on the other Pakistan, Muslim nation which would be divided in turn into the West and East, future Bangladesh.

Millions of Hindus, Sikhs and Muslims who had stayed on the wrong side during partition would then begin one of the largest migrations in history to the other side of the border, a path marked by the blood of nearly a million dead massacred by the majority communities of each region.

Between the chaos of the massacres and the murder of his father, the brothers separated, and while Siddique fled in a convoy with her four-year-old sister to Pakistan, her younger brother Habid remained in India with their mother, with whom he was traveling.

Neither brother would hear from the other again until 2019, when the Pakistani Punjabi Lehar YouTube channel, which was created to help reunite people who were separated during the partition of the Indian subcontinent.

More than half a million subscribers

Nasir Dhillon, who runs the channel with more than 544,000 subscribers and that has helped bring together more than 200 family and friends from both sides of the border, he uploaded a video of Siddique two years ago and was soon informed by a Canadian doctor that the brother was alive and residing in Indian Punjab.

From that moment, “the brothers began to talk every day for hours through whatsapp video calls“, until this month the reunion could finally take place, Dhillon told Efe.

The chosen place was Kartarpur, a Pakistani Punjab area which opens a 4.7-kilometer-long corridor that, since November 2019, allows devotees from India to visit the Darbar Sahib Sikh shrine during the day without the need for a visa.

“That was the happiest day of my life, when I met my brother again after 74 years,” Siddique, who now he is 84 years old and resides in a village in northern Pakistan.

The life of both was never easy. The mother committed suicide by jumping into a canal, affected by the murder of her husband and the loss of her eldest son and daughter, whom she never heard from again. The sister also passed away a few years after the partition.

Habib was unmarried and lived with a Sikh family in the Indian state of Punjab, while Siddique was raised by an uncle across the border. After the reunion, “when my brother was leaving, he reminded me of the moment we parted ways 74 years ago,” lamented the older brother, who does not know when they will meet again.

Since that meeting, Siddique has continued to insist that the Pakistani authorities issue a long stay visa so that he and his brother can live together for the rest of their lives. “I appeal to (Pakistani Prime Minister) Imran Khan to issue a visa to my brother so we can spend the rest of our lives together,” pleaded Siddique, who only wants to see her brother again before she dies.

A diplomat from Pakistan Foreign Ministry, who preferred to remain anonymous, explained to Efe that the visa application must be reviewed before making a decision.

But that process can take months, or even years, because of the Tense relationship between India and Pakistan, who have a very strict visa policy for citizens who wish to visit the neighboring country, which could make it difficult for the brothers to meet again.

Siddique does not lose hope. “A border can divide a country, but it cannot undo the blood relations that we have on the other side of the border,” he concluded.