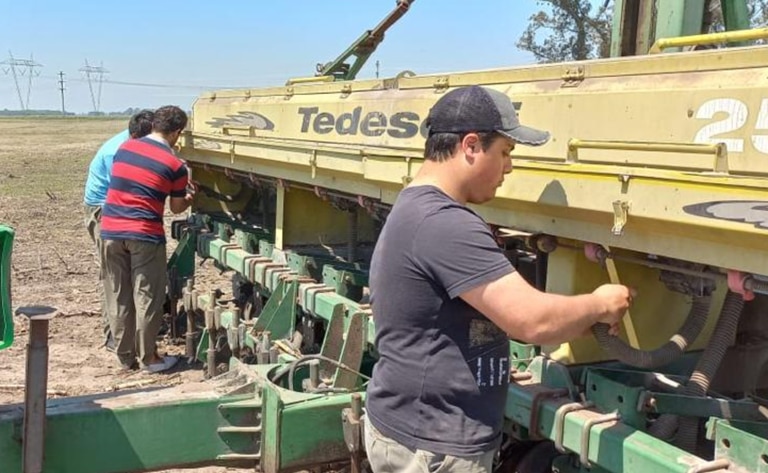 What life is like for 300 young people who make cheese, dulce de leche and soy while they study


“We produce by teaching and we teach by producing”. That’s him motto that has been maintained for almost a century by the Salesian Agrotechnical School of the Valley, located in the 25 de Mayo district of Buenos Aires.

Although he was a teacher two decades ago, Three years ago Father Jorge Ledesma returned to take charge of the direction of the educational establishment. “Our school It has two dimensions: a pedagogical sense and an economic one of sustenance. both things are important for us: education and agricultural production, which are compatible and complement each other because, through the technical and practical education provided to the students, It allows them to have a very good job opportunity and on the other hand, good management of our resources provides the fulfillment of at least 30% of scholarships for students”, account to THE NATION.

As described, that was the intention that Doña Concepción Unzué de Casares had when she donated the first hectares of land in 1925, then a new donation would come in the 80s, which left an economic unit of 2,700 hectares.

“It is about managing these donations under the best productive programs that allow us to sustain the school and its scholarship plan. What we are looking for is teach the boys lor that it has to do with technical production but, above all, for them to learn to manage an efficient and profitable production plan”, details.

“We are a great family. They are seven years old, where the boys arrive at the age of 12 and leave at the age of 19. They live in the residence that we have from Monday to Friday and on weekends they return to their homes. Most of the students’ families live and work in the fields and, due to the long distances, they cannot go and return in the day”, he says.

In the morning, as in all schools, the knowledge that has to do with the school curriculum is imparted, but for the afternoon after lunch, the practical subjects of the field “that most excite the boys” begin.

The different agricultural activities that They are divided into classes. The first courses are in charge of production rather than farm tasks such as poultry, beekeeping and the orchard. Then as you go, the students of the superior years are in charge of the sheep, the pigs, the dairy farm, the crops and the cattle.

In 800 hectares, they grow wheat and barley, as winter crops, and in the summer, soybeans, corn, and sunflowers. “The idea is always to diversify to run as little risk as possible. If we do poorly with one crop, we have a streak in another. We cannot risk planting a single crop because we have to cover 30% of the scholarship plan,” points out.

In this sense, Ledesma describes that, As good producers, they always make planting insurance. “Last December, a stone that fell in the field caused us to lose about 300 hectares of soybeans, which if we had not had that insurance, we would not have been able to replant”, holds.

in the rest of the field They make pastures and winter pastures for livestock and thus have maximum use of the surface: in a rodeo 800 mothers have two animals per hectare. In addition, part of the corn they harvest is used for the fattening of the feed lot they own and to feed to the dairy cows.

“In livestock, we do a full cycle. The finished animals are sold and some is left for the school’s consumption.” says Ledesma, who years ago was trained in a diploma in agricultural education.

In the dairy, the 180 milking cows produce about 5,000 liters per day. With the milk, part is used for the children’s consumption, another part is processed and the rest is sold to a first-class dairy factory: “We have a small dairy industry, where we make hard cheeses such as Sardinian, Reggianito, Provolone Parmesan, also buttery, machine, Gouda and Gruyère, and a dulce de leche. We look for the diversity, maintaining the quality of the products we manufacture and market”.

In the pig sector they have 70 mothers and also, in an intensive rearing in sheds, they make a complete cycle: a part is consumed in the dining room and with the rest they produce sausages and hams that they market in neighboring towns. Years ago, were presented with a sustainability project in a contest organized by the German government to make a biodigester with pig waste. They gave them 800 thousand dollars and today they produce gas for the hot water boilers that the children use to bathe. In addition, the leached liquids are used as fertilizers that are irrigated in the field, where the result has been excellent: “The financial savings have been enormous. Every year, we must revalidate that the project is still running”.

Three years ago, seeing an economic potential, they decided to go from 50 to 150 hives, whose production is sold in fractions. Also have 600 laying hens, broiler chickens and sheep (these last two only for consumption). in the fifth, the star is the quince trees, which with their fruits make some sweets that “take them out of their hands”.

But not everything is education and agricultural production in Del Valle, the spiritual part has a special place. “Here, the boys get baptized, take communion and confirmation. In addition, we have a missionary group that travels to the west of the Pampas every year,” details.

“The challenge is to continue improving and continue to more than fulfill the legacy of Mrs. Unzué de Casares. We are good educators and good producers at the same time, we promote innovation and inadvertently become benchmarks in the area”, Add.

It is January and the bustle of the boys in the playgrounds during breaks became silent for a while. Only the weekly guards of 20 boys who take turns during the summer remain. “Everyone wants come to the shifts of the holidays and enjoy, because 100% of their time is dedicated to agriculture”, ends.