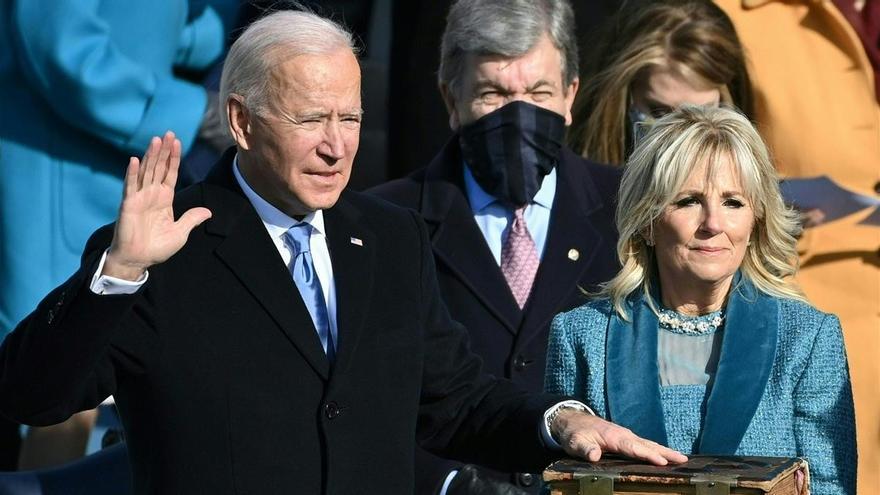 
“The Unit is the only way forward”. The sentence was pronounced Joe Biden in his inaugural speech as 46th President of the United States. Two weeks after the assault on the Capitol and in the midst of a pandemic that then viciously hit health and the economy, that was an intervention in which he pointed to the “crises and challenges” facing the country, to the “dangers and possibilities“. With spirit and optimistic rhetoric, the democrat marked a path of repair and construction in which, he said, there was much to heal but also “much to gain.”

A year later, those challenges continue, changed but present; some indisputable advances that it has achieved do not resonate but, on the contrary, are lost in disapproval rates reaching 52%; the road to unity is an entelechy and his presidency runs marked by limitations, with the image that Biden looks more swept up in events who can shape them.

The situation in the US in the face of the double crisis of the pandemic is undeniably better than in January 2021. 63% of the population (and the 67% of those over 5 years of age) are vaccinated in the face of a disease that has already left more than 850,000 dead in the country. But Biden had a moment similar to the hasty “mission accomplished” of George Bush in the Iraq war when he marked the 4th of July as the moment of “independence from the virus”.

The arrival of the variant delta in summer and more recently omicron they have stripped the lack of preparation of your Administration, which is now accelerating to catch up on issues such as the testing system or the production of treatments. Problems persist in keeping the schools and has not disappeared politicization of the pandemic and the measures to combat it. The latest blow to Biden in this area came last week from the Supreme Court, where the conservative majority stopped his vaccination or testing mandate for companies with more than 100 employees. But he also faces the satiety of an exhausted population, and the management of the pandemic is now his, without being able to hold his predecessor responsible for errors.

“You can’t pressure people to feel good,” said the Democratic strategist David Axelrod. And that applies to the economy. In this field, Biden can boast of some remarkable numbers and realities. In his mandate, for example, 6.4 million jobs have been created, more than in any first year of presidency; the unemployment has fallen from 6.3% to 3,9%, wages have risen, and after pushing through a nearly two trillion dollar bailout plan, he won bipartisan support to pass a 1.2 trillion infrastructure plan, in which 550 million are new spending.

However, Biden is haunted by ghosts. There are the problems in the supply chain. There are the millions of jobs that are not covered and phenomena such as the “great resignation.” And there is the weight of the inflation, which has risen to 7% per year, the highest price increase experienced by those born after 1981. The improvements in the network of social benefits that should have come with his ambitious plan Build Back Better, In addition, they have vanished in the face of the Republican blockade and the rejection of moderate senators from their own party.

Climate and other crises

The collapse of that legislative initiative has also badly wounded Biden’s promises to address another crisis: the climate emergency. Without the law and its money, it remains to be seen that the president who returned the United States to Paris Agreement can deliver on the promise it made in Glasgow to cut emissions in half by the end of the decade compared to 2005.

In the list of assets, Biden adds having achieved the appointment of 41 federal judges (80% women, 53% non-white), but in the passive group it accumulates crises. The summer was marked by debacle of the chaotic withdrawal from Afghanistan and 2022 starts with diplomatic relations with Russia that they should avoid a crisis over Ukraine on the brink of the precipice. There has been no significant progress in resurrecting the Iran nuclear deal or in the strained relationship with China. and the fiancee Immigration policy reform is not advancing. Meanwhile, on the border with Mexico the number of arrests has skyrocketed and in the first 10 months of his term alone there were almost 1.8 million crossings.

The message of unity Biden pronounced at his inauguration, that urgency to “end the uncivil war” that accelerated in the Trump mandate, has faded. The political divide has widened between the Democratic Party and a Republican Party radicalized and to a large extent given over to Trump’s “big lie”, just like millions of citizens.

BidenAnd it’s not just the Conservatives’ fierce blockade strategy. The slim majority in Congress it has been ratified as a mere mirage of the possibility of legislative action. A couple of moderate senators from his party, Joe Manchin and Kyrsten Sinema, have knocked down his two biggest priorities: Build Back Better and, more recently, the attempt to end the practice of filibusterism to advance bills that protect the right to vote, under Republican assault and especially threatening minorities. And it is also pending for Biden to give a response to the renewed movement that, when he arrived at the White House, cried out throughout the country for the racial justice.