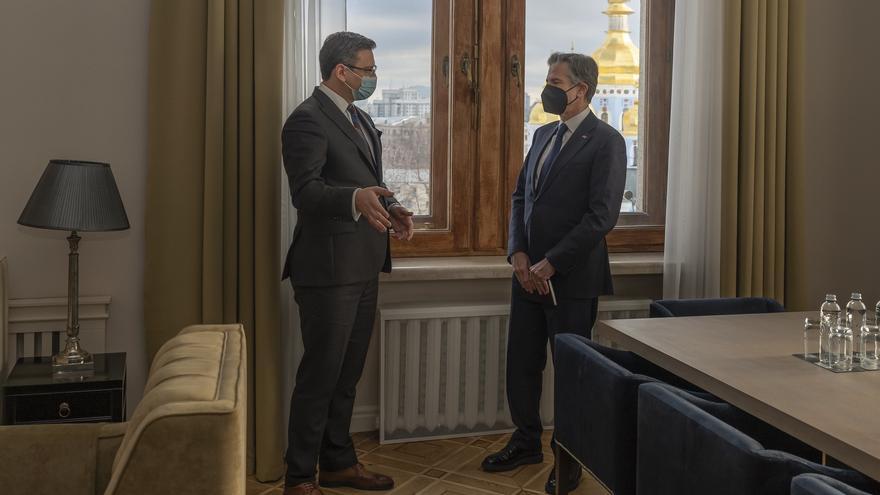 
USA will not present a written response to the security demands raised by Russia, as required by Moscow, when the foreign ministers of both countries meet in Geneva this Friday. “We have to see if there are opportunities“, he declared this Wednesday Anthony Blinken, US Secretary of State, during a visit to Kiev in which he reaffirmed his country’s commitment to independence and territorial integrity of this former Soviet republic now aligned with the West.

“I will not present a document at this time to the Foreign Minister. We have to see where we are located,” Blinken advanced. The meeting that both will hold in the Swiss city is considered a lucky extension of the series of unsuccessful contacts between representatives of USA, the OTAN and the OSCE with Russia during the last week, -perhaps one last chance- in which it was confirmed that it was impossible to approximate positions in the two main requirements of the Russian delegation: the withdrawal of the invitation to join NATO to Ukraine and Georgia, and the Russian veto to possible military deployments in the member countries of the Atlantic Alliance that once made up the Warsaw pact, equivalent to a review Full-fledged results 20th century cold war.

Blinken wanted to send again a powerful signal of support for Ukraine, beginning in Kiev the transcendental European tour that will culminate in Switzerland on Friday. The president has expressed his “unwavering support” to the Ukrainian government and has promised to do everything possible so that Russia “does not get away with it”. “A nation cannot simply change the borders of another by force, or dictate what it has to do; if we allow these principles to be violated with impunity, then we would open the Pandora’s box“, he emphasized.

Blinken, who has accused Russia of planning an increase in tens of thousands of troops massed along the border with the neighboring country, has warned Putin of the price to pay in the case of invasion, which would not only include economic sanctions “devastating” for the Russian economy, but also the “increase” of defense aid to Ukraine and the “strengthening” of NATO’s military presence in the nearby countries to Russia.

For his part, the Ukrainian president, Volodymyr Zelensky, thanked the head of US diplomacy for his “personal involvement” in the crisis, as well as the guarantee received from the North American side that nothing will be agreed behind Ukraine’s back. “I am sure that there will be no decision on Ukraine without Ukraine,” he said on Twitter.

On the ground, the tension continues going up in decibels. Ukrainian intelligence services have determined that the cyberattack against several ministries was launched by the group UNC1151, who is supposed to have links with the espionage of Belarus. In addition, the Baltic countries have asked NATO to increase deployments on their territory after the announcement of the presence of Russian soldiers in neighboring Belarus to hold maneuvers next month.