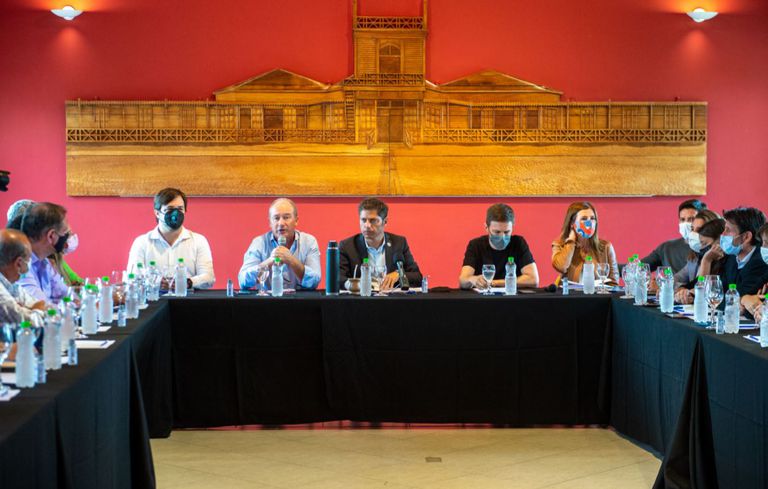 
The governor of the province of Buenos Aires, Axel Kicillof, announced free booster dose for security personnel and pregnant people or breastfeeding during a press conference in Mount Beautiful where details of the epidemiological situation were provided.

“From tomorrow, free vaccination with a booster dose will also reach security workers, pregnant people and those who are breastfeeding, provided that they have completed their primary schemes at least four months ago”, announced this afternoon together with the Ministers of Production, Science and Technological Innovation, Augusto Costa; and Health, Nicolás Kreplak; and the local mayor, Marcos Fernández.

Vaccination against Covid-19 for these groups It can be done without a shift at any vaccination center in the Province. and, in the case of pregnant people and those who are breastfeeding, the information will not be required to be updated in the records of the VacunatePBA platform. Since December, the free application of the third dose is now available for those over 60 and over 50 who have received Sinopharm vaccinations; immunocompromised who have been inoculated with the second component at least one month ago; and health personnel.

In this sense, Kicillof highlighted: “We have made a great effort to sustain the season from the health point of view, strengthening the care capacity and, above all, promoting vaccination.” And he added: “It is very important that everyone is immunized, since the data shows that those who are not vaccinated are 36 times more likely to develop the disease in a serious way”, he pointed.

Regarding the epidemiological situation, Kreplak reported that 49,794 cases of Covid-19 were recorded in the Province this Tuesday, while the weekly daily average exceeds 41,000 infections. “Thanks to the successful vaccination campaign, there is a decoupling with serious cases: only 48.3% of intensive care beds are occupied, with only 28.2% being explained by the coronavirus,” he explained. .

“Thanks to investment, joint work and planning, we are carrying out a historic season, which even exceeds the results obtained before the pandemic,” Kicillof said, adding: “We have arranged an unprecedented security operation and a battery of policies aimed at creating specific funds and credit to support tourism”.

For his part, Costa highlighted the policies to accompany the tourism and cultural sector and emphasized: “With the numbers for the first half of January completed, we can confirm that we are moving the best season of the last ten years, since in these 15 days there were 1,850,000 tourists who chose the destinations of the province of Buenos Aires”.

For his part, Mayor Fernández highlighted the working day together with representatives of local productive sectors “in which the effort made by the Province to achieve this summer season was clear.” And he added: “We are extremely happy to reap the fruits of this work that was not a coincidence, but is the product of the articulation between the Nation, the Province and the municipalities so that we can all be enjoying this season.”

Finally, Kicillof stressed that “the province of Buenos Aires is going through a historic season, as a result of planning and investment in health, safety and culture.” “We are going to continue supporting care and vaccination because tourism is recreation and tranquility, but also production and work for the people of Buenos Aires,” he concluded.