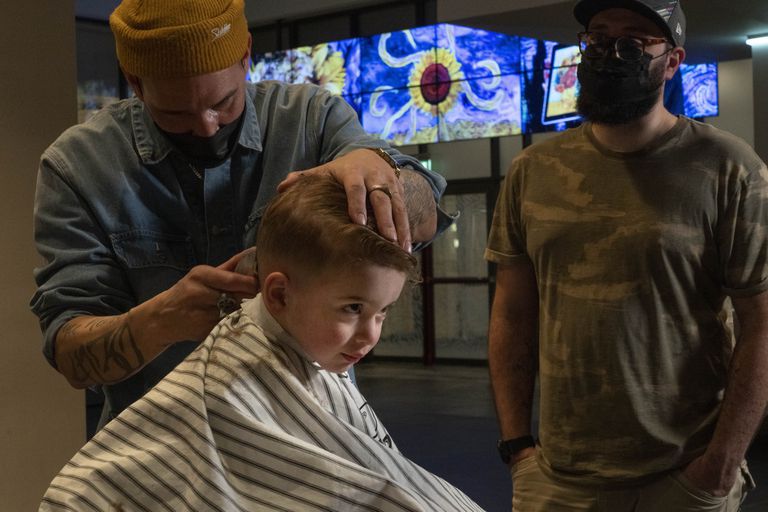 Cut and hairstyle at the Van Gogh museum: unique protest with hairdressers and manicurists in the Netherlands


The cultural sector today defied the restrictions imposed by the Government of the Netherlands and opened its doors with a singular protest. Some seventy theatres, museums and concert halls offered hairdressing, beauty and gymnastics services (activities that are enabled in pandemic) to protest in this way against the sanitary restrictions that have kept the rooms closed since mid-December with the spread of the Ómicron variant.

In a matter of hours, tickets were sold out to attend several of these spaces in different cities such as Rotterdam, Utrecht, Eindhoven and The Hague, in which, in addition to art, it was possible to enjoy massages, beauty sessions, yoga classes and other sport activities.

Dozens of Dutch cultural spaces transformed their facilities for the day. The Van Gogh Museum, for example, converted one of its rooms into a beauty salon, with four stylists who cut their clients’ hair and painted their nails in front of iconic paintings, while two barbers did the same on the stage of the Concertgebouw, the most important concert hall in Amsterdam, while the orchestra performed the Symphony No. 2 by Charles Iver.

Although the restrictions were lifted last week for warehouses and contact professions – hairdressers, beauty salons, sex work – the cultural sector is still closed. It was about “showing that a visit to the museum is safe and that they should be open,” the director of the Van Gogh museum, Emilie Gordenker, told AFP news agencies.

The actions, which included physical exercise courses at the Mauritshuis museum in The Hague, a building that houses the famous painting The girl of the pearl by Vermeer, occurred in the framework of civil disobedience demonstrations in bars and restaurants in the Netherlands, in protest at the strict measures against Covid applied by that government, which are among the strictest in Europe. The authorities have warned that cultural institutions could be subject to possible sanctions. The municipality of Amsterdam has recognized that although the culture sector is having a hard time, “the rules apply to everyone”.