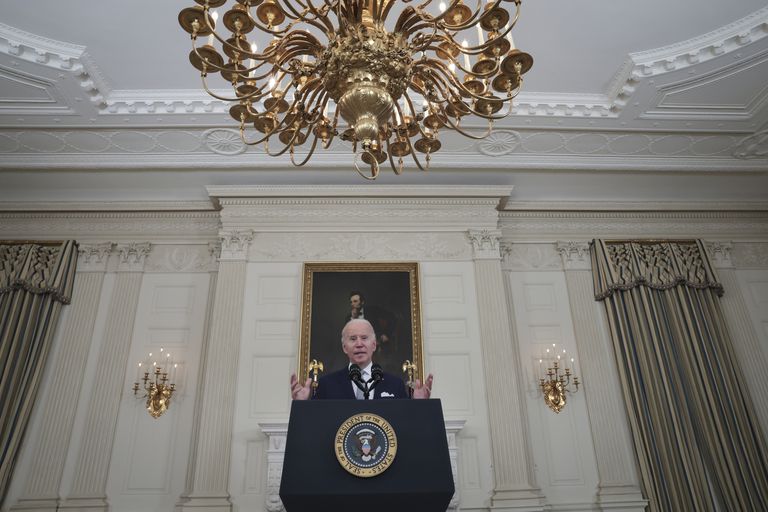 In his first year in office, Joe Biden defended his achievements, but acknowledged “frustration and fatigue” in the country


WASHINGTON.- A year after assuming the presidency of the United States, Joe Biden defended the progress made by his government, although he acknowledged that there is “a lot of frustration and fatigue” in a country that it is still trying to put the coronavirus pandemic behind it and is experiencing the highest inflation in four decades. Criticized for over-promising, Biden sought to twist the story about his administration at a White House news conference by claiming that achieved more than expected.

“It has been a year of challenges, but also of enormous progress,” Biden said, in a brief message before opening the round of questions. “Despite all this progress, I know there is a lot of frustration and fatigue,” he acknowledged.

Biden touched on a burning foreign policy issue: the latent conflict with Russia in Ukraine. Biden said he believes Vladimir Putin will “enter” Ukraine, a move he warned will be “a disaster for Russia.”

The Democratic president answered questions from journalists in the White House at the worst moment of his young presidency in an attempt to change the narrative about his administration. The chaotic departure from Afghanistan and the emergence of the delta variant of the coronavirus, in the last boreal summer, marked a break: their popularity began a drift that still continues. Gallup’s latest poll gave him an approval of his government of 40%, almost on par with the 39% that Donald Trump had a year after moving to the White House. Six out of ten Americans believe the country is headed in the wrong direction, according to an average of RealClearPolitics polls.

Biden dedicated the bulk of his initial message to the fight against the coronavirus and inflation, the two main problems facing his government. He rejected the idea that the pandemic will haunt people’s lives for an indefinite time, saying his proposals will help control prices, though he made it clear that the Federal Reserve will lead that battle.

“Some people call it the new normal,” Biden said, of the current state of the fight against the coronavirus. “I call it a job not yet done”, Hill.

Gripped by the expectations he created on his way to the top of power, Biden also had enormous difficulty living up to one of his central campaign promises: give the United States – and the world – stable, strong, polished and effective leadership after the four chaotic years of Donald Trump’s presidency. Biden has also failed so far on another core mission he set for himself: unite the country, which is as polarized today as it was before he took office.

“I did not foresee that there would be such a strong effort to make sure that the most important thing was that President Biden did nothing,” the president complained, criticizing the opposition and their rejection of his entire agenda. “What are the Republicans for? In favor of what? Name one thing Republicans are for.” he added.

The press conference at the White House was itself an atypical event: just the tenth appearance of Biden to answer questions from the press in his first year, including six conferences by himself, and three with other leaders. It is far less than Trump, Barack Obama and George W. Bush during their first year in office. Biden also offered fewer one-on-one interviews to the media. His preferred method of communication continues to be giving speeches from the official residence.

The president tried to install an optimistic look yesterday, an effort that his closest advisers had already deployed in the previous days. Biden and the White House projected the message that The first year left “enormous progress” in the fight against the coronavirus, the vaccination campaign, the record creation of six million jobs – unemployment fell to 3.9 percent – ​​and the approval of a infrastructure with which the Democrats aspire to modernize the economy. But the problem for Biden it is not that it achieved little, but that it promised much. Biden also rejected that idea. To the expectations that fell by the wayside, Biden added a problem that the United States had not experienced for four decades: inflation, a scourge that hits the pocketbook of every American.

“I didn’t promise too much, and I probably did more than anyone thought would happen”, challenge Biden.

Contrary to that vision, Biden’s main initiative, the “Build Back Better” project, or Build Back Better, which foresees a historic investment of two trillion dollars in a decade to expand spending on health, education, support for families and the fight against climate change is frozen in the senate, stalled by a lack of support from Republicans and divisions among Democrats.

Biden now acknowledged that he will have to “give birth” to that plan, and hopes to get “pieces” of the original project. The same happens with a reform that the White House has proposed to guarantee access to the right to vote, and the immigration reform that millions of families of undocumented immigrants await. Biden and the Democrats are urgent for results: they fear losing Congress in the next legislative elections, an outcome that, if it materializes, will leave Biden with his hands practically tied for the rest of his term.