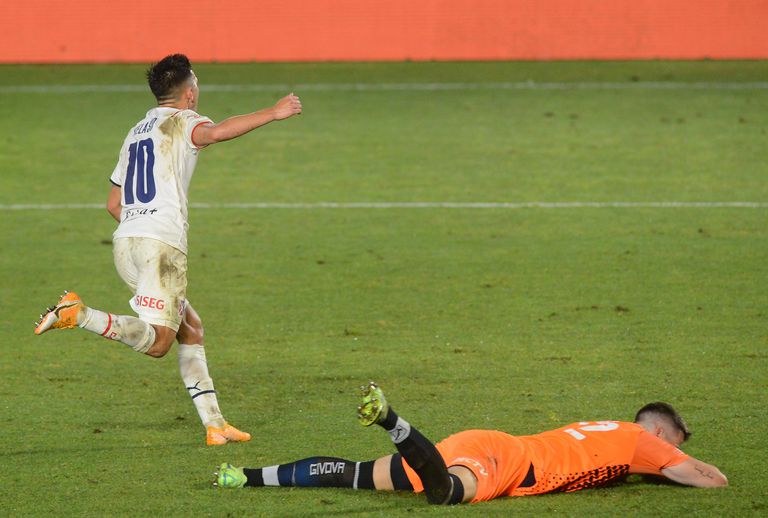 Independiente has no respite: he beat Talleres and Alan Velasco shone, the jewel that begins to say goodbye For this Independent, no success seems to be complete. The Red got his first win of the year, a convincing 3-1 at the expense of Talleres, in which Ángel Hoyos did not have a good start in the tough mission of replacing Cacique Alejandro Medina. Despite having several casualties, including those affected by Covid and injured, the Avellaneda team had a formidable task by Alan Velasco, author of two goals.

But the joy is not complete. Because Velasco, perhaps one of the last jewels that Red has left, he is almost with one foot on the plane, after a new and juicier offer from Dallas, from the American league (MLS), now for 7.5 million dollars, a figure almost impossible to reject for the club’s ailing coffers. The championship hasn’t started yet and Independiente is beginning to yearn for its number 10…

The offer that arrived for Velasco in the last few hours is for the entire pass of the skilled midfielder. Taxes will be deducted from that figure, so that Red would receive about 7 million dollars, more than necessary to lift inhibitions and pay debts. The news is negative for coach Eduardo Domínguez, which last week lost its forward and captain Silvio Romero, who emigrated to Fortaleza, from Brazil, and saw how the squad quickly disarmed, to which reinforcements have not yet arrived while the managers put out the economic fires.

The possible replacement for Romero, who is close to becoming a reality, is Damian Batallini, last step in Mexican soccer, but whose pass belongs to Argentinos Juniors. The idea is to close a loan with a charge and a purchase option.

To make matters worse, between Monday and Tuesday, coronavirus infections were added: Patricio Ostachuk, Matias Sosa, Milton Álvarez, Braian Martínez, Juan Pacchini, Ayrton Costa, Mauro Zurita, Julián Romero and David Sayago. The good news for Domínguez -also absent in La Plata for presenting symptoms compatible with Covid- was the reinstatement of Uruguayan goalkeeper Sebastián Sosa, who arranged a one-year contract after disassociating himself from Mazlatán, from Mexico, and rejecting an offer from Peñarol, from Uruguay.

Despite all these casualties, Independiente managed to raise their spirits a bit by beating Talleres de Córdoba 3-1, on the second date of Group B of the Summer International Tournament. On the Estudiantes field, Rojo overcame an initial disadvantage and improved the image it had left last weekend in the clash with San Lorenzo (0-1), even despite playing with many substitutes. Thus, the definition of Group B will be on Saturday, with the clash between San Lorenzo (3 points) and Talleres (0).

Talleres opened the account with a good cross from Matías Esquivel at 43 minutes. But the Red equalized immediately, through the Colombian Andrés Roa, also with a cross shot, after taking advantage of a mistaken exit from the albiazul background.

The first period was hardly discreet, with two teams that repeated themselves in a movement without rhythm, and with few emotions, which came due to some mistake, such as a pass from goalkeeper Renzo Bacchia to Arias inside the area, but he immediately recovered by blocking the shot at point blank range of the Uruguayan. At 43, Arias gave in to Matías Esquivel and former striker Lanús crossed the shot to break the zero. The equality came immediately, with a rushed start by Juan Méndez that yielded badly, and the ball drifted to the position of Roa, who hit another shot diagonally for the partial 1-1.

The summary of the meeting

In the second half, Talleres appeared more sharply and was close with a shot by Fértoli from the edge of the area and a header by Sosa near the crossbar. But an erratic Villagra pass led to a precise assist from Togni to Velasco, who easily broke Guido Herrera and defined with class for 2-1. Talleres was unprotected at the back and Rojo sentenced him, with a very good pass from Benavídez to Velasco, who scored on his own and defined the right corner with an accurate touch for the final 3-1.

Incidence: in the second half, 32m. Sent off Malatini (T) for lack of last resort.