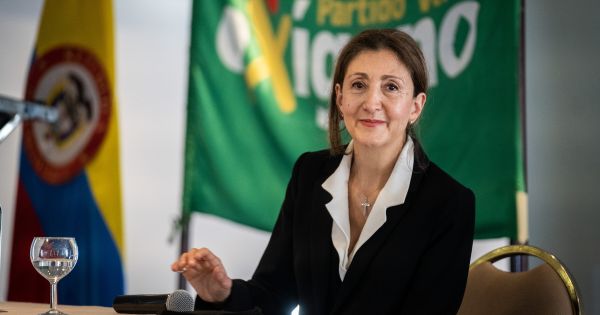 Ingrid Betancourt will run again for the presidency of Colombia


Ingrid Betancourt will run again for the presidency of Colombia

Ingrid Betancourt, a politician who was captured by the Revolutionary Armed Forces of Colombia (FARC) guerrillas while campaigning for the presidency and held hostage for six years, announced Tuesday that she would run again.

??I am here to announce that I am going to participate in the consultation on March 13, that I am going to be part of this centre-hope coalition as a candidate for the Presidency and I am going to work tirelessly from this moment on. , from dawn to dusk, to be president,?? Betancourt said.

He also explained that he will participate in the March 13 primaries of the so-called ??Coalition of Hope?? which is made up of the ??coalition of hope?? (center), the ??experience coalition?? (right) and the ??historic pact?? (left).

??Today I am here to finish what I started,?? she added, referring to her 2002 presidential candidacy, before she was kidnapped by the FARC. Betancourt was a legislator in the 1990s and in 2001 she resigned her seat to be a candidate for the Green Oxygen Party when she was kidnapped on February 23, 2002.

She remained in the hands of that guerrilla until July 2, 2008, when the Army released her along with a group of hostages, in a clean military operation in which there were no shots fired.

During her captivity, Betancourt’s fate became a regular theme in the world media, given her status as a woman, a presidential candidate, and a French-Colombian citizen.

After his release, he went first to France and eventually earned a doctorate in divinity from Oxford.

After returning to Colombia, she confronted her former FARC captors in the courts created in the peace agreement and exposed the atrocities committed against her and her fellow hostages.

Despite her personal tragedy, Betancourt has been a staunch defender of the peace agreement, without losing her status as a victim and her critical sense of both the agreement and the former guerrilla leaders, with whom she has been at odds.

Betancourt assured this Tuesday that the current enemy of the country is corruption, for which, if elected, she promised to clean up the administration and the institutions. ??I want to be the president of Colombians to ensure that the wealth of the country goes to those children, to those young people, to those adults from whom our war, our violence and our corruption took away all the possibilities of being what they wanted to be, ?? she promised.

On his change of heart after announcing that he would retire from politics, Betancourt explained that at some point one has to think: I keep looking at things from the side or I roll up my sleeves and put myself where I can help the most. .??