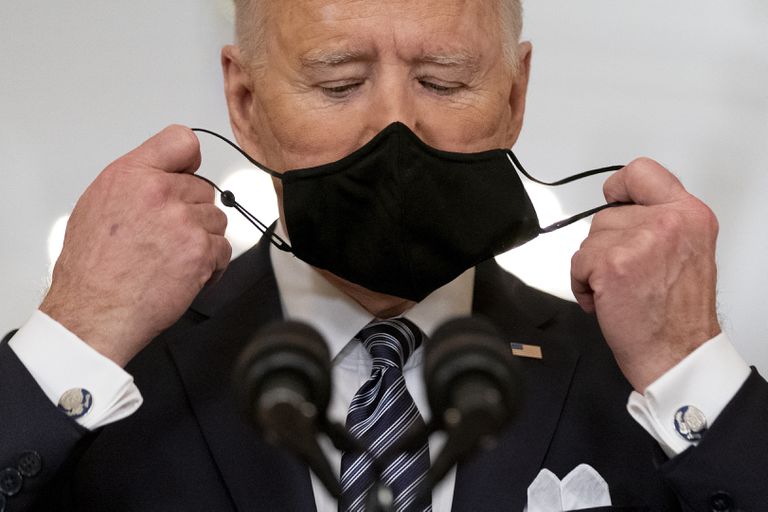 
WASHINGTON.- For President Joe Biden and his team, the second week of August was going to be a vacation. But Afghanistan imploded. The reports coming out of Kabul were harrowing: images of desperate Afghans climbing on the wings of US military planes leaving the country, and days later, a suicide bombing outside the airport fence, killing 13 US soldiers.

In his August 16 address to the nation, Biden defended the decision to withdraw from Afghanistan but acknowledged that the recovery of the country by the Taliban “It happened much faster than anticipated.” In public, his government officials and their allies argued that there was no way out of a war that had been lost for years, and in private they said that in a few weeks the Americans would have forgotten about that chaotic withdrawal.

During the election campaign, Biden had presented himself as an antidote to his predecessor, promising a “strong, constant and stable leadership”, according to his own campaign ads, after President Trump’s chaotic tenure. But the hustle and bustle of the withdrawal from Afghanistan was an early announcement of the cataract of crisis that left Biden’s image as a great restorer of order and tranquility very bruised.

This Thursday Biden will celebrate his first year as president of the United States with several open fronts: the Democratic Party is boiling internally, the approval of laws in Congress is paralyzed, there are problems in the supply chains, inflation is worrying, frictions with Russia are growing and the omicron variant is raging. Consequence: his average approval rating barely scratches 40%.

Biden aides and supporters say he took office amid unprecedented calamities, from a historic pandemic to a struggling economy, noting that despite a slim majority in Congress, he managed to pass two major pieces of legislation in his first year. : the economic stimulus plan designed to help rescue the country from the pandemic and a gigantic package of public investment in infrastructure.

But his administration has also repeatedly underestimated the magnitude of the problems facing the country – such as its short-sightedness in the face of delta and omicron variants of the coronavirus – and failed to unite hawks on the left with the more moderate wing of the Democratic Party. The president and his team were also unable to convey a clear and reassuring message that would convince Americans that the government understands their concerns but knows that better days will come.

“People are understandably anxious about the duration of the pandemic and the constant disruptions to daily life,” says Democratic New Jersey lawmaker Tom Malinowski. “And when people are wrong, they always hold the sitting president accountable.”

For her part, legislator Dina Titus, a Democrat from Nevada, says that “if I had to give them a grade – and I was a professor of political science for many years – I would give them a ‘You did not complete the task’.”

Biden’s numbers in the polls were already plummeting but they ended up sinking as of June, during last summer. At the beginning of September, and for the first time since his inauguration, Americans dissatisfied with Biden’s management were already more than those happy with his performance, according to an average of the surveys of The Washington Post from May 2021.

Post and ABC polls from late June to early September reveal a 10-point drop in approval of Biden’s handling of the pandemic. The September survey also shows that 60% of those surveyed disapproved of his handling of the situation in Afghanistan, and by November, Biden’s overall numbers had slipped even lower, amid growing discontent with his handling of the economy and the coronavirus.

The poor figures in the August polls “are the product of a sum of things, such as the departure from Afghanistan and the resurgence of the virus, when just six weeks before they had told people that the pandemic was behind them,” says David Axelrod, former adviser to Barack Obama. “Just when people expected order, a sense of chaos ensued.”

The Biden administration, adds Axelrod, he has real accomplishments to show off to Americans, “but many remain unsettled and upset.”

The evaluation made by the Republicans is much more lapidary. Ronna McDaniel, chairwoman of the Republican National Committee, says that “for a long time, people gave Biden the benefit of the doubt, because they saw him as a good guy trying to do his best.”

“It was at that moment that Biden was seen cruel, insensitive, inept, and unsuccessful at a key moment where leadership was needed ”, shoots McDaniel. “Then came the wear and tear of Covid and inflation and everything else. Now, most Americans are disappointed, because they do not get a coronavirus test kit or any of those things that the Biden administration should be prepared to guarantee.”

Old, incoherent, lazy, sleepy: those are the adjectives that first came to mind for ten nonpartisan American women and suburbanites who gathered a few months ago for a focus group organized by Democratic pollster Celinda Lake on behalf of various progressive groups.

When asked to elaborate, the women said that Biden at least “seemed to try,” but that he often gets muddled and loses the thread of what he is saying. One of them said that Biden is “lukewarm” in defending his own party and that the president saw him more as a “supporting actor” than as a protagonist.

“It doesn’t give me a sense of strength,” he said. “Conveys weakness.”

Another of the women even gave him some advice: “If you need a nap, let him take it, because we need him to be very alert.”

In an attempt to dispel such criticism, says a senior White House official, the administration has begun to modify its communication strategy so that Biden can speak more directly to Americans who are having a hard time: according to his aides, in those public appearances Biden It brings out your ability to empathize with people.

His White House team is already working on Biden’s March State of the Union address to Congress, and they consider it the perfect occasion to relaunch your government agenda and build momentum for the mid-term elections.

“What people see in President Biden is someone who thinks about what Americans care about from the moment he wakes up and walks into the Oval Office, someone who does everything in his power to improve their lives,” he says. White House communications director Kate Bedingfield.

Biden’s tone has also changed. In two high-profile speeches this month — one marking the first anniversary of the Jan. 6 Capitol uprising and the other to push for voting rights legislation — the president adopted a more forceful and confrontational tone, with direct challenges to Trump and the Republican Party.

Government officials have long argued that if they can get the coronavirus under control, the lives of Americans will dramatically improve, as will their own political prospects. But so far that task has been fraught with obstacles.

White House officials and other Democrats also argue that Biden inherited a major disaster from his predecessor and who deserves credit for several victories, from managing to vaccinate with at least one dose to nearly 75% of Americans and reopen most schools, until a Rescue Plan for $1.9 trillion and an infrastructure bill agreed with the Republicans.

“It’s important to take stock of where we’ve come to,” says Jen O’Malley Dillon, White House deputy chief of staff. “This is not the time to stop the ball, because there is a lot of work ahead. But there is also much to be said for everything this administration has done in the past year, and the president’s emphasis on controlling Covid, growing the economy, and passing laws that will directly improve the lives of Americans. ”

Supporters and detractors alike acknowledge that the Biden administration is at the mercy of an unprecedented pandemic, one that changes rapidly from one day to the next and one that they have failed to defeat, as Biden promised at the time.

“Since Biden came to help us get through the pandemic, when the Covid numbers improved his approval numbers grew, and when Covid started to beat us, Biden’s numbers went down, so there we are now,” says Simon Rosenberg, a Democratic strategist. “Biden has to become the general who helped us get through the battle against Covid and unite the American people, and I think he still has time to do it, but the omicron variant made things very difficult for him.”