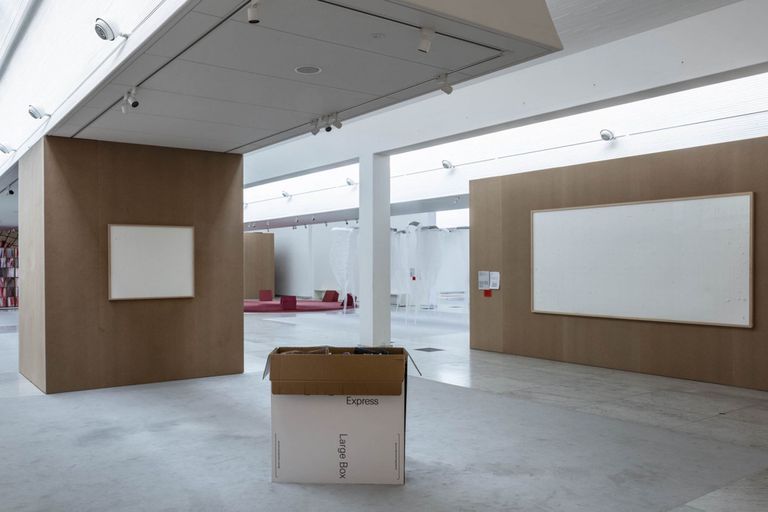 The art of stealing? The Kunsten museum denounced the artist who charged 83 thousand dollars for two blank paintings


A new controversy shakes the art world. The Museum of Contemporary Art Kunsten finally sued the Dane Jens Haaning, who a few months ago became known for present two blank canvases and keep the 83,000 dollars that the museum had given him to make them, ensuring that part of the work was to take the money.

It all started when the artist was summoned to participate in the exhibition Work It Out, which opened on September 21 in the museum, with works on the theme of the future of work and money. The directors had invited Haaning, known for his critical works on money and power, to re-create two of his pre-existing pieces: An Average Danish Annual Income (2010), a box full of banknotes, 328,000 crowns -the currency of Denmark- and An Average Austrian Income (2007) another similar one, in which 25,000 euros were available within the framework, which reflected the average annual salary of Denmark and Austria. To accomplish this task, the museum gave him $83,000; however, in the process, the artist decided to create Take the Money and Run, a work composed of two empty paintings.

“The work of art is that I took your money,” the artist told the Danish television channel DR. He added: “It’s not a robbery. It’s a breach of contract and breach of contract is part of the job.” With this work, he considers, he does not move away from the slogan of the exhibition, on the contrary, he takes it to a personal field: he intends to denounce the working conditions of artists in the art market, and encourages his colleagues to do the same . “I invite other people with working conditions as miserable as mine to do the same. If they have a shitty job, they don’t give them money and ask them to use theirs to work, take it out of the box and get out,” he said, clarifying that recreating his previous jobs would have cost him money out of his own pocket. .

The fact opens again polemics and discussions that are not news in the world of contemporary art. First, install the discussion on where are the limits between what is art and what is not. It refers, for example, to May 2021, and the controversial case of the Italian artist Salvatore Garau, who presented an “invisible sculpture” at auction and was sold for $18,000. In turn, it puts in check the role of galleries and museums against the work of artists.

In this way, Haaning intended to protest against the working conditions, but the museum, which finally included the canvases in the exhibition, considered that he had violated the agreement and gave him until the last day of the exhibition to return the money. “I want to recognize Jens the absolute right that a work has been created, which is related to the ongoing exhibition. But that’s not the deal we had. Jens should not have the money, because it is not part of the agreement, ”Lasse Andersson, director of the institution, explained to Danish public television.

The museum gave the artist the term that the exhibition lasted to return the money, but since that day arrived – the exhibition ended on January 14– and the artist did not do it, they made the complaint: “We take this step because we have a responsibility to the private funds that financially support the exhibition and to the visitors,” concluded Andersson.