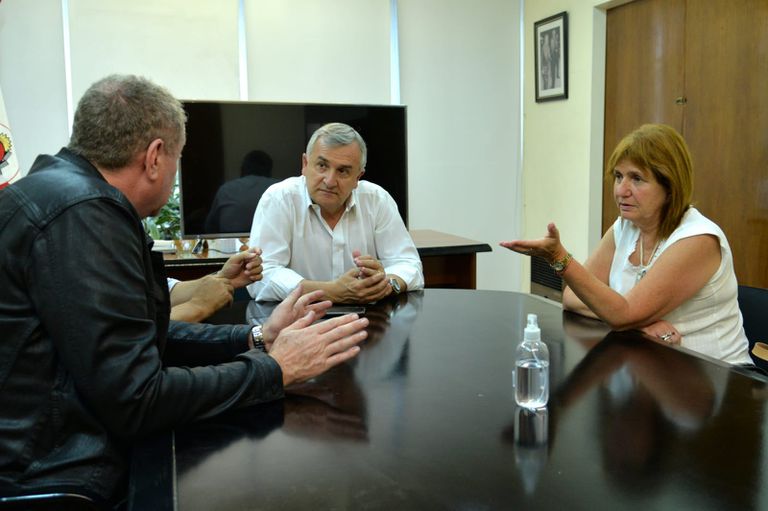 The summit between Gerardo Morales and Patricia Bullrich after the crossings: from flirting with Milei to the JxC plan


After the exchange of accusations for the dialogue with Alberto Fernandez for the debt, the governor of Jujuy, Gerardo Morales, and the Pro holder, Patricia Bullrich, recovered the tune: the president of the UCR and the former Minister of Security met today at the headquarters of the national committee of radicalism and smoothed out rough edges.

“It was a very good meeting”they said from both camps. Morales and Bullrich saw each other’s faces after the discussion they had two weeks ago at a meeting of the national table of Together for Change in which they debated the position of the space before the call for Martin Guzman opposition governors to inform them about the status of the negotiation with the International Monetary Fund.

Bullrich attended accompanied by the national deputy Gerardo Milman, its main owner, while Morales was escorted by Guillermo Hoerth, one of his closest collaborators. The conclave lasted for more than an hour. They chatted about “work development and production projects for Argentina” and reviewed initiatives related to production, energy and security. Then, they analyzed the territorial assembly of JxC throughout the country and agreed on the need for the space to have candidates throughout the country. Both Morales and Bullrich aspire to run for the presidency in 2023.

Both agreed to give “a proactive dynamic” to the opposition coalition. “We must have another work scheme, we need more initiative,” said UCR sources. They also agreed to advance with the setting up of a JxC premises in the Capital, future venue for meetings of the national table of the force.

In a section of the meeting, Bullrich and Milman clarified to Morales their link with the libertarian Javier Milei. As soon as he took over as head of radicalism, the man from Jujuy notified his partners in the opposition coalition that Milei, whom Bullrich and Mauricio Macri they intend to add JxC with a view to the 2023 elections, it was a “limit”. The head of Pro and the deputy explained to Morales that the eventual incorporation of the economist would allow the opposition conglomerate to avoid a flight of votes to the right.

The radical cacique, on the other hand, considers that JxC should consolidate itself as a coalition of the center and incorporate more sectors of Peronism that do not agree with Kirchnerism. Your personal connection with Sergio Massa generates resentment between the “hawks” and the unruly radicals, which leads Martin Lousteau. But Morales, like several Pro referents, looks at other PJ leaders, such as the governor of Córdoba, John Schiaretti. Bullrich and the partners of JxC in Córdoba flatly reject an alliance with the “Gringo”. In fact, Larreta, who has a good relationship with Schiaretti, ponders the electoral performance of Louis Judge Y Rodrigo de Loredo.

Morales had strained his relationship with Bullrich after he referred to the debt that Macri contracted in 2018. Defending his openness to dialogue with the Government for the negotiation with the IMF, he said that JxC should listen to Guzmán because the loan had been granted to the administration of Cambiemos. Their expressions generated the reaction of Fernando Iglesias Y Waldo Wollf, among other referents of the “halcones”. “I’m fed up with Lavagna’s vice”Iglesias bellowed on Twitter. Immediately, Morales came out to defend himself: he ratified that the opposition should dialogue with the ruling party about the debt and launched: “There are some in my space that want me to blow everything up in March.”

After the tension with the “halcones”, the man from Jujuy met with the head of the Buenos Aires government Horacio Rodriguez Larreta, one of the maximum referents of the moderate wing of JxC. For months, Morales had been polishing the figure of Larreta, his main opponent in the fight for the presidency. Even the governor of Jujuy had flirted with a joint formula with Bullrich in 2023 during the electoral campaign. When he spoke of the head of Pro, the president said that she had been the “best minister” of Macri.

Attentive to Larreta’s move, Bullrich and Milman met with the head of the UCR to iron out rough edges and seal the peace. “Our friends pushed him into a photo with Larreta. Now we recover it for this side”they say at the top of Pro.

Since he was anointed as president of the UCR, Morales seeks to give another imprint to the centenary party. Those who frequent it assure that the governor of Jujuy kicked the board of JxC and took the lead in the negotiation with the Government for the agreement with the IMF because he understands that Argentina is dealing with urgent problems that must be addressed immediately. He is convinced that the UCR has the structure and weapons to fight for the leadership of the main opposition coalition and plant a competitive candidate for the presidency in 2023. Its owners say that its position on the IMF issue falls within that framework.

Morales suspects that the “hawks” and tougher sectors of Pro push Larreta to harden his position with the Government. Sharp, his collaborators remember that the mayor knew how to maintain a close link with Fernández until they took away the co-participation funds. The man from Jujuy believes that the country must close an agreement with the IMF for the debt, yes or yes, and considers that there must be a dialogue between the ruling party and the opposition, to provide “solutions” to the citizens and prevent extremists from breaking in. For that reason, he is willing to confront Macri, Bullrich or Larreta. He also suspects that Macri strains the link with the government because he speculates on an eventual return to power in 2023.