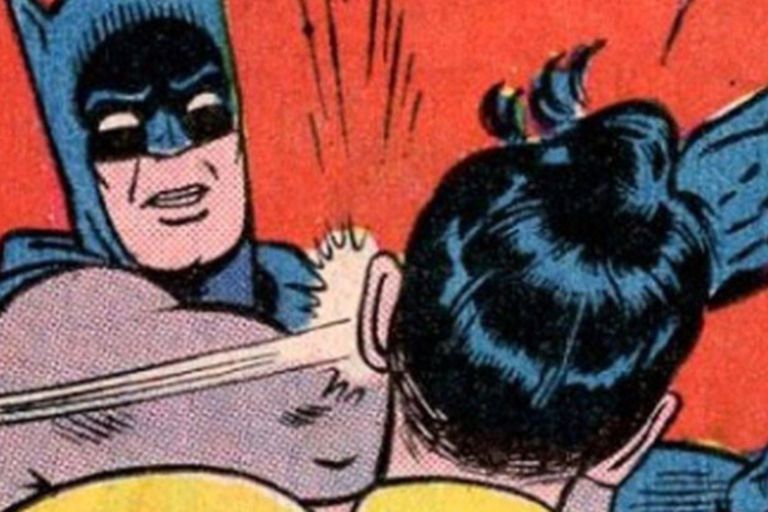 The true origin of the Batman meme slapping Robin


One day and without imagining it, many things became memes. As time goes by, users of social networks begin to adopt images, videos and screenshots as new catchphrases, as jokes that they repeat in controversial, serious or funny situations to add a touch of humor to a global debate. There are many examples and images taken out of context are transformed into memes and travel through Twitter, Instagram and WhatsApp every day. But behind them there is a history and a very different idea compared to the one used today. One of these cases is, for example, the famous meme of Batman slapping Robin.

Despite what one may believe, its origin is quite far from the use that is given to it today. The original scene is part of one of the “imaginary novels” of the universe of DC. Comics, that is to say, of the alternative versions of the nocturnal hero. It’s about the number 153 from World’s Finest Comics, created by Edmond Hamilton, Curt Swan and George Klein in 1965.

In these versions, Batman and Superman are at odds since the The dark knight believes that the hero of the planet Krypton killed his father. During that comic, Batman wants to travel to Minneapolis to duel and Robin tries to talk him out of it. That’s when the confrontation occurs.

“Batman, your pain has obsessed you with this idea of ​​revenge. I beg you, give up,” asks his friend. “Don’t tell me I’m wrong, brat. Proving Superman guilty is my mission in this life.”, exclaims Batman while giving him the famous slap.

The premise is simple: Robin tries to say a phrase until Batman cuts him off and corrects with a punch to the face. In networks, it is usually used to graph what opinions tend to annoy users and resort to humor to show displeasure at certain things. Following this line, there are a large number of versions where it is enough to replace the dialogues of the characters to create a funny back and forth that challenges other people.

“Happy Monday, Batm…” Robin tries to say in one of the images. “No,” Batman cuts him off with his punch. “Tomorrow is Valentine’s Day…”, the yellow-cloaked hero threatens to comment. “Tomorrow is Sunday, period!” Sums up the prince of the night. Even in the pandemic a reversal was found for this meme, putting the bat 2 meters from his partner and slapping him from a distance, with a chinstrap included.

Thus, there are many examples and in each new debate different alternatives appear. One of the favorites of many to end a discussion or show annoyance at a controversial and repeated opinion ad nauseam.