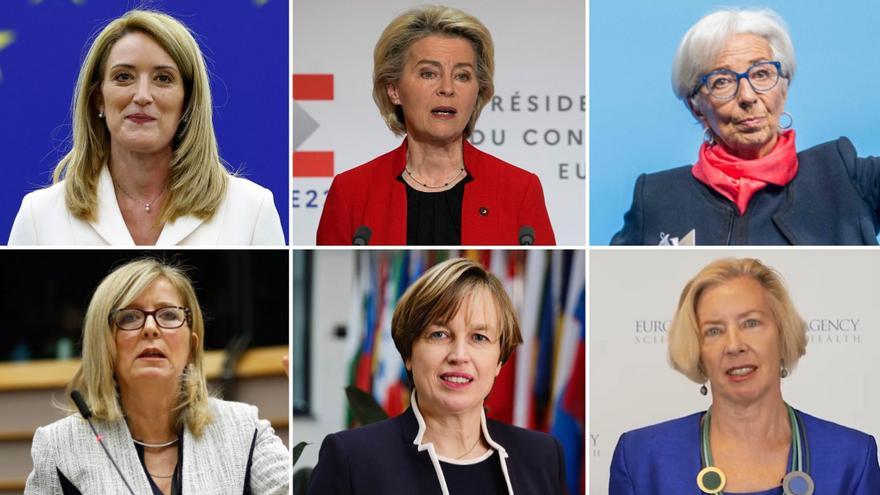 wave of change in brussels


In mid-2019, the only woman who occupied one of the so-called topjobs, the high positions of the European leadership, was the Italian Federica Mogherini, current rector of the College of Bruges and predecessor of Josep Borrell at the forefront of EU diplomacy. Two and a half years later, in three of the four presidencies of the European Union –European Commission, European Central Bank and European Parliament– three (conservative) women sit: the German Ursula von der Leyen and the French Christine Lagarde, the result of the pact between European leaders in July 2019, and the Maltese Roberta Metsola, who since Tuesday is a member of this select and restricted club after being elected by MEPs.

“This day will be remembered as the day women tipped the scales and held two of the top three positions in the EU for the first time. I predict that this moment signals a change towards equal representation in the future”, he hopefully values ​​the equality commissioner, the socialist Helena Dalli. The ascension of his Maltese compatriot to the most visible and symbolic position in the European Parliament, together with “the appointment of von der Leyen, Lagarde, the achievement of gender parity in the college of commissioners or the increase in the number of women members of Parliament European” send, in his opinion, “an important signal to society: that gender equality can only be achieved when we practice what we preach”, he explains in statements to EL PERIÓDICO.

Until now, never have so many women reached the Everest of European politics. 13 of the 26 members of the commissaires panel of the Community Executive – 48% – are women, with weighty portfolios such as competition policy, which is held by Vice President Margrethe Vestager. In addition, more than a dozen direct or lead European agencies and organizations. This is the case of the Single Resolution Board (Elke King), the body responsible for the orderly resolution of banks in crisis. Also from the European Ombudsman (Emily O’reilly), whose task is to promote good administration in the club. And the same with the newly created European Public Prosecutor’s Office (Laura Kovesi), aimed at combating crimes against the European budget, or the police cooperation agency Europol (Catherine de Bollea).

Although the list is not exhaustive and there are still more agencies led by men, other agencies with women at the helm are the European Medicines Agency (Emer Cooke) or the European Center for Disease Control and Prevention (Andrea Ammon), which have become two pillars during the crisis unleashed by the pandemic. The Economic and Social Committee (Christa Schweng), the European Data Protection Authority (Andrea Jelinek), the European Maritime Safety Agency (Maja Markovčić), the European Fisheries Office (Susan Steele), the European Institute for Gender Equality (Carlien Scheele) or the EU Asylum Agency (Nina Gregori).

“That women have power is good and positive. I always value positively that they have visibility and that they occupy spaces of power for various reasons”, celebrates the MEP from Podemos and vice president of the women’s commission in the European Parliament, Maria Eugenia Rodriguez Palop. In the first place, because it denotes that from an aesthetic and discourse point of view “we have won a battle”. Second, because “the skills of women, regardless of how you are, think or (political) color, are transformative. And lastly, pedagogically, because “for girls and adolescents to see that women can also succeed, be recognized and command is something transformative.”

Rodríguez Palop is much more cautious about the impact that Metsola’s appointment may have on feminist politics. “We all know that she is a particularly conservative, anti-abortionist lady and that she has had clearly anti-feminist positions as an MEP. The danger is that this is a make-up that in the end leads us to a situation of regression, which is what we do not want because we have advanced a lot in the first part of the legislature. You have to ask her to behave like a president and not tip the scales to the anti-feminist side. Going back in the second part of the legislature would be terrifying”, he points out.

The wave of change that could also reach an organization like the OTAN, which in its 72-year history has never had a woman in charge. The Secretary General of the Atlantic Alliance, Jens Stoltenberg, term ends in September 2022 and although the election process has not yet been opened names have already begun to sound and those who claim to give the baton to a woman. In the list of possible candidates since last year there are three women from three Central and Eastern European countries. This is the case of the former president of Lithuania, Dalia Gribauskaite, the former president of Croatia, Kolinda Grabar-Kitarovic, and the former president of Estonia, Kersti Lakjulaid.