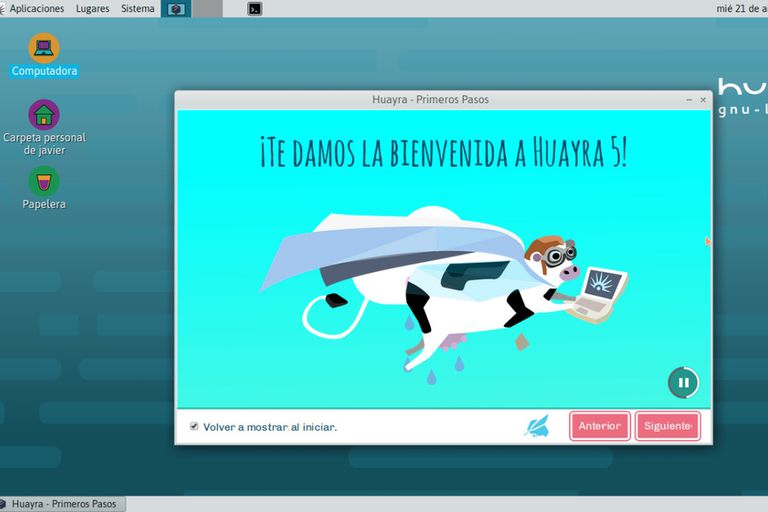 Windows or Huayra Linux: the debate returns over the operating system that Connect Equality notebooks should use


An old debate has resurfaced these days with a new tender for the Connect Equality plan, published a few days ago in the Official Gazette. Connect equality It was the program that between 2010 and 2018, while it was in force, distributed computers to more than 5 million students. The crux of the matter is in the operating system that these computers will use, and in what is called the double boot; that is, the possibility that the computers can be used with Huayra, a Linux distribution developed by the State that includes a selection of open source software for class work, or with the Microsoft operating system, which includes Windows 10 Pro, together with the Office package (Word, Excel).

The question that several organizations are asking is why proprietary software (Microsoft’s) is included instead of only locally developed software, as had been done in the previous tender, when Connect Equality had been renamed Juana Manso. Those kits came with Huayra 5.0. The computers of this new stage of Connect Equality, like the previous ones, have programming environments, design and editing tools and different educational resources.

But, beyond the goal of digital inclusion, the new specific tender for companies that want to participate indicates that yes or yes they must include “the licensing modality of the Microsoft Shape The Future Program. Therefore, the bidders must quote, as part of the required solution, licenses under the aforementioned program”. The requirements are Windows 10 Pro and Microsoft Office Professional Academic 2019.

In dialogue with LA NACION, Beatriz Busaniche, President of the Vía Libre Foundation, detailed the main criticism of the inclusion of Windows: “What proprietary software does is prevent knowing how the program is made, share its development, improve it, make legal copies of the program. We also know that they are not ultra-powerful computers, which is why integrating software like Windows results in a reduction in the useful life of the hardware itself,” he specified.

numerous organizations questioned in an open letter to the Ministry of Education, the Minister Jaime Perczyk and the General Manager Educ.Ar, Ruben Daudia, for the inclusion of this operating system in the equipment. They point out that it is “a real nonsense at a time when free software has more than tested and demonstrated its ability to offer appropriate, functional, rights-respecting and free systems for all educational tasks.”

“Equipping the computers of the Connect Equality Program with a Private Operating System such as Microsoft Windows sends a highly harmful message to our students: It puts them in the position of consumers of technology and not producers of it,” the statement said. “The arbitrary inclusion of a proprietary operating system and office package that will only serve to promote the marketing of a company with a long history of abusing its dominant position in the market. As then, we know that Free Software works perfectly and that it is not necessary to use proprietary software on the machines.”

“We also know from our long experience with the program that this results in the Huayra Linux system not being the first option when starting computers, and that in this way the old and well-known Microsoft operating system is given priority over the creation of its own capabilities that the use of Huayra implies. The Ministry of Education thus ignores a development that is its own and that is based on the work carried out by the Free Software community and that promotes the values ​​of this community of sharing software, using it for any purpose and, above all, studying and improving it. . It is that characteristic of participation that is promoted with the use of Free Software in Education, precisely that which blocks and prevents the use of Microsoft in the computers of the program”, they explain.

“Not only is the right to informational self-determination and education of children and adolescents at stake, but especially the future and development of science and technology for the future of our national development.” And they add that “the Ministry’s decision seems not to be aligned with the policy of fostering national development, substituting imports, minimizing the outflow of foreign currency and promoting science and technology with local production. Having all these possibilities at hand, the option for Microsoft seems to go against the grain of these times”. The statement is signed by numerous personalities, specialists in the field.

From the Education portfolio emphasized that they are the “main defenders” of Huayra; “In fact, we finance it, we support it, we promote it and we push it.” But they explained the “pragmatic” reason for the tender. “The Windows inclusion is about equal opportunity: we cannot deny the reality, everyone is used to working on Windows”, they pointed out.

In this sense, they pointed out that in many cases they find students who are “used to something else” and equal opportunities with those who bought computers in the commercial market, which usually come with the Redmond company’s operating system. “It is not an economic problem,” they pointed out. “Nor is it ideological: we are going to continue supporting Huayra as we have done up to now.” And they pointed out that some teachers expressed technical difficulties when using Linux, and that with double booting they can avoid these problems.

LA NACIÓN tried to communicate with Microsoft, but the company avoided making any statements.