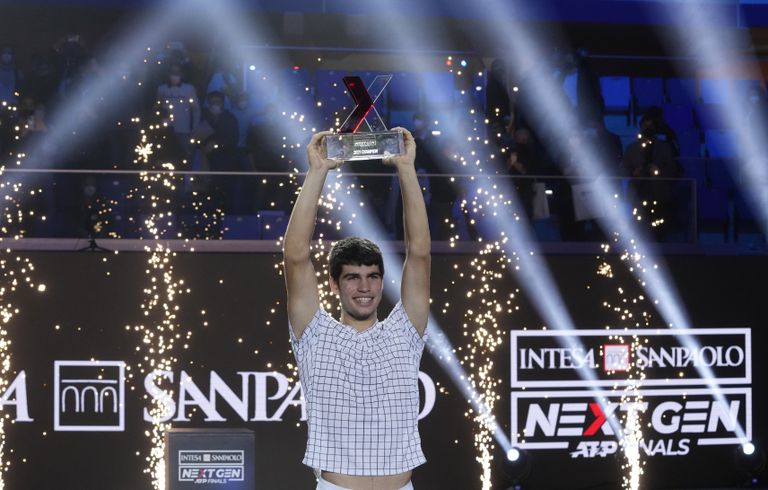 Carlos Alcaraz, the Spaniard called to be the next world tennis star


VILLENA, SPAIN — The tennis academy’s noisy Christmas party was taking place in the next room. But Carlos Alcaraz was calm, sitting at a table surrounded by trophies and talking about the beauty of training in this remote, relaxed, calm place.

It was hard not to detect a metaphor as dance music pounded off the walls.

Alcaraz, a dynamic and cool Spaniard and also one of the most exciting talents of the sport’s new generation, will have to keep blocking out a lot of shock to make his dreams come true.

At 18, he is already being compared to Rafael Nadal, his compatriot, at the same age, even considering that their styles are not similar and Alcaraz has a photo of Roger Federer, not Nadal, in his room. But just like Nadal in his time, Alcaraz is a true prodigy; He is already No. 31 in the world rankings and also at the Australian Open, where he advanced to the third round despite contracting Covid-19 in November and missing all previous tournaments.

“I think greatness is written on him,” says Paul Annacone, who trained Pete Sampras and Federer and currently works with American Taylor Fritz, and who often has reservations about weighting players too early. But Alcaraz, the youngest player in Melbourne’s men’s draw, is capable of really letting you go with his high-flying, all-court style of tennis.

He measures 1.85m, the same as Federer and Nadal, although much less than the rest of the leaders of the new generation, Daniil Medvedev, Alexander Zverev, Stefanos Tsitsipas, and Matteo Berrettini, all above 1.93m. But on the court he is not seen as a player in inferior conditions. His playing style is a bewitching mix of fast, powerful strikes, abrupt tempo changes and instantaneous gymnast-like movement as he slides his legs wide in corners and maintains control of his body even in the most difficult situations. extreme.

“His game is electric,” says Annacone. “It’s really unique. He is quick with the racket, like Andre Agassi, and he is quick on his feet like Rafa. You can play over the net and run back if necessary. A lot of things come naturally to him at 18 years old and he’s already number 30 in the world, so I can’t imagine how good he can be in two years if he stays physically fit.”

Alcaraz is coached by Juan Carlos Ferrero, a low-profile former Spanish number one whose calm gaze fits well with the long skyline of Villena’s landscape in southeastern Spain, filled with medieval forts and open spaces. Ferrero grew up near this place and is currently one of the owners of the JC Ferrero Equelite Sport Academy, where Alcaraz sleeps and trains.

“The key this year is to keep working well and never think that the most difficult work has already been done,” says Ferrero. “But knowing Carlos and the values ​​that he and his family have, I would be surprised if he was blinded by his success.”

But despite becoming one of the best tennis players in Spain, Alcaraz’s father did not have the money to pursue a professional career for long: he stopped playing at the age of 20 to become coach and administrator of his club. dad. Alcaraz, the second of four children, took the family passion to another level.

Alcaraz spends the weekdays at the academy and returns to El Palmar on weekends: “At first I planned to stay at home, but it was difficult to find partners to practice with,” he recalls. “I think if I stayed in Murcia it would have taken me longer to grow. There are many distractions in Murcia. Many friends, nights out. Here in the academy I don’t have those things”.

Ferrero appreciates that Alcaraz’s father does not interfere in his training. The former tennis player, almost in the same physical state at 41 as he was at his peak as a player, won Roland Garros and became number one in the world in 2003, just before Federer and Nadal took over. He was already in the place that Alcaraz wants to reach.

“I’m still quite young, and I’m going through a time when everything is new to me. Juan Carlos has already been through all this, so he can really pass on an experience to me that other coaches can’t”, says Alcaraz. “He lived it from the inside.”

And what is the advice from Ferrero that has helped you the most so far? “Above all, don’t rush me. That I’m going to get the experience and play in tournaments and get tough, and there’s no need to get ahead of the process. I need to live all these moments and not worry about immediate results, because I am facing the best in the world for the first time in all these tournaments, which I am also playing for the first time. And I need to enjoy, respect and gain the experience that I need to have a clear vision of everything.”

This did not stop the coach and alumnus from announcing their high expectations for 2022, which include securing a place in the top 15 of the rankings. Not content with that, Alcaraz made it clear on Monday that he prefers to climb to No. 8 and qualify for the ATP Finals in Turin, Italy, at the end of the season.

What is clear is that as Alcaraz prepares to face No. 7 seed Matteo Berrettini in the third round in Melbourne on Friday, the world’s best players are already on edge. He doesn’t have a driver’s license yet, but he does have a lot of tennis ability.

Gaining physical structure is also part of his plan. Alcaraz spent much of his preseason the same way he spent the previous one: doing strength and conditioning work to prepare for best-of-five-set matches and a tight schedule. Wearing tank tops in Melbourne was partly a nod to past Spanish tennis greats such as Nadal and Carlos Moyá, but also an expression of confidence in his more imposing bearing. “We know that this year I am going to have to play a lot of long games, so it is important to feel physically strong,” says Alcaraz. “Knowing that you can deal with that is very important.”

Ferrero likes to compare Alcaraz to a car with a powerful engine that needs a chassis strong enough to handle it. “You can have very good shots at 17 or 18 years old, but if you are not at the same level physically, it is not sustainable,” adds the coach. “It’s essential work, but it has to be done properly. You can’t go too fast.”