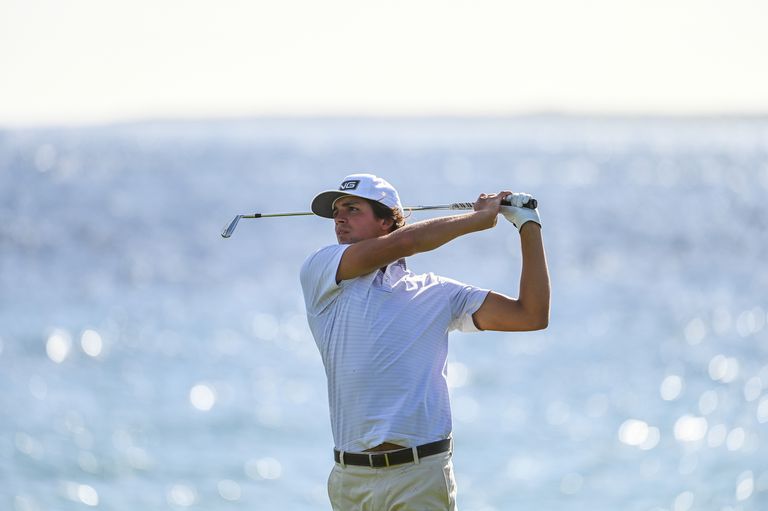 Dominican Republic, a paradise for Argentine golfers… at least on the first day of the LAAC


LA ROMANA, Dominican.– Diente de Perro, the dream course that La Romana has on the coast, received the first round of the Latin America Amateur Championship (LAAC), which offered good assignments from four of the eight Argentine golfers. Among them, Second Olive Pinto, which led the ranking.

The LAAC’s hot day on Thursday began early, with the participation of all 102 players, and lasted until around sunset on the shores of the Caribbean Sea. Oliva Pinto finished in first place with 66 shots, 6 under par. “I’m trying to enjoy myself, to get to know the court, and I’m staying calm. The ride back was very good. I stayed well mentally, hit aggressive and consistent. Three difficult days are coming and I don’t think I’ll sleep much”, he commented for THE NATION.

In addition, the native of Córdoba had a nice novelty. “My family arrived as a surprise yesterday. That motivated me”, said the leader, who will share the course of the second day with the Puerto Rican Roberto Nieves.

Another of the Argentines who finished under par was Vicente Marzilio. In his first experience at the LAAC, he finished third in the opening round, with -4 (68). “If they had told me that the first day was going to be like this, I would buy. I was nervous, but that didn’t stop me and I was able to play well. For what comes I want to continue doing the same, but I would like to balance the roller coaster of emotions and continue building the tournament little by little”, he expressed his feelings.

The great putt of the Argentine Vicente Marzilio

Meanwhile, to Mateo Fernández de Oliveira it took him a while to make progress on the opening holes, but then he got several hits and finished sixth on the day, with -3 (69). “It was a long day, as far as it took a long time to get the first birdie. But one of the objectives was to stay patient all week, and that was what happened in the first 11 holes, with 11 pars: it was key to stay patient, compete and play”, said Fernández de Oliveira.

For his part, the defending champion, Abel Gallegos had a good start. With 2 under par, the 19-year-old 25 de Mayo player, who participated in the Augusta Masters and the British Open in 2021, is ranked 11th.

The remaining four Argentines dthey should improve this friday, in the second round. Manuel Lozada shares position 19, with the pair; Aram Yenidjeian is 36th, with +2, and in 49th place are Andy Schönbaum and Juan Martín Loureiro, with +3.

But there were more news in Casa de Campo. Fred Ridley, president of the Augusta National Golf Club; Martin Slumbers, CEO of the R&A (Royal and Ancient Golf Club of St. Andrews), and Mike Whan, CEO of the United States Golf Association (USGA), who announced that the eighth Latin America Amateur Championship will take place from January 12 to 15, 2023 at the Grand Reserve Golf Club, Puerto Rico.