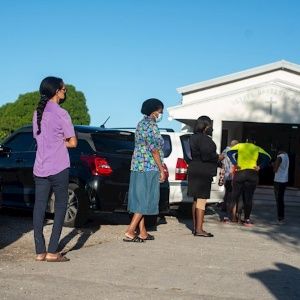 Polls have closed in Barbados


The Barbados electoral body confirmed the closure of all polling stations, which was carried out with biosecurity protocols in the framework of the Covid-19 pandemic.

The good influx of voters marked the election day; polling stations were open from 06:00 to 18:00 so that citizens could cast their vote to elect 30 seats in Parliament.

It should be noted that these elections are the first to be held in Barbados since it became a Republic on November 30, 2021.

The electoral register registered by the authorities is approximately 266,330 people, who exercised their right to vote for the first time, and 108 candidates presented themselves in the contest.

Prime Minister Mia Mottley, who heads the Barbados Labor Party (BLP), and lawyer Verla De Peiza for the Democratic Labor Party (DLP), will test their strength in early elections as they were initially scheduled for 2023.

This Wednesday, at least 3,700 election officials are on duty to ensure a smooth election process.

Local media reported rows of voters from the opening of the polling stations, between 05:30 and 06:00 local time, until approximately 09:30, and attributed this initial congestion to the fact that many voters decided to go to the polls before going to work.

According to the Electoral Commission, Barbados has a population of 280,000 inhabitants, of which 266,330 will go to the polls. A new government will be elected for the next five years and 108 candidates have been nominated for 30 seats.

A Labor Party leader, Wilfred Abrahams, told reporters he was pleased to see voters keeping their physical distance and adhering to protocol.

Since the emergence of the Covid-19 outbreak, Barbados has accumulated 35,734 infections and 269 deaths from the virus. Some 5,000 to 6,000 registered voters, who are currently active cases, will not be able to go to polling stations.

The president of the Electoral and Boundary Commission (EBC), Leslie Haynes, estimated on Tuesday that the results of election day could be delayed due to the application of the aforementioned biosafety regulations.

The expert appreciated that the training of electoral personnel can help so that delays are not excessive, but acknowledged that they could be longer than usual.

On November 30, 2021, Barbados became a republic when it officially ceased to have Queen Elizabeth II of England as head of state, breaking centuries of colonial past.