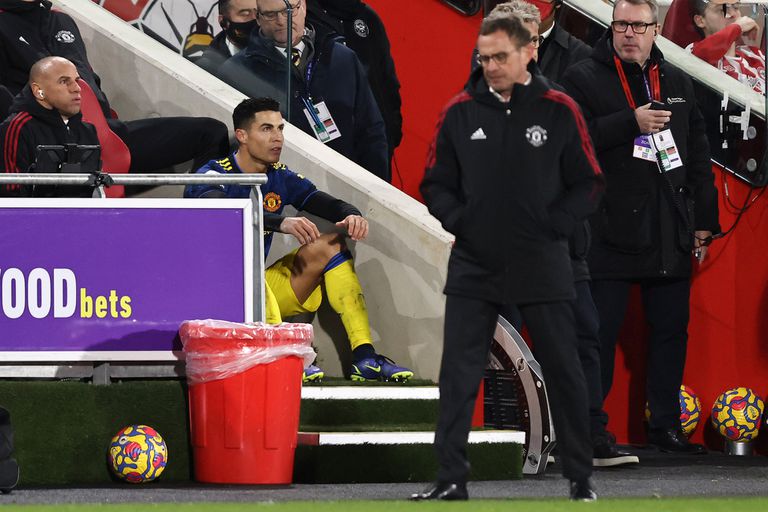 Premier League: Cristiano Ronaldo was angry because he was replaced in Manchester United’s victory Manchester United got a very good win as a visitor this Wednesday. They beat Brentford 3-1, in a pending match of the 17th day of the Premier League, and managed to get closer to the qualifying positions for the next Champions League. But… the highlight of the meeting was the anger that had Cristiano Ronaldo as the protagonist.

The Portuguese striker, who was playing as a starter again, was replaced 25 minutes into the second half, when his team was up two goals, with goals from Swede Anthony Elanga and Mason Greenwood. Ralf Rangnick, DT of United, ordered the entry of Harry Maguire instead of CR7, who did not take it well at all and left with a serious gesture. “To me? you take me out? Why?” Cristiano Ronaldo told the United driver.

Not content with having to leave, Cristiano Ronaldo sat on the stairs and began to gesticulate, until Rangnick approached him and explained the reasons for the change. After the game, United’s German manager commented: “Ronaldo is a goalscorer and it’s normal that he wants to stay and score, but he’s just coming back from injury. We were up 2-0, and I was looking to be more solid defensively at the time.”

“I also didn’t expect him to hug me after being replaced. For me it is important to save it, thinking that we have another match in a few days. I know how important it is for a striker to score goals, but I have to make decisions in the interest of the team. There is no personal matter with Cristiano,” Rangnick insisted.

The gestures of CR7

The change arranged by Rangnick has to do with what happened last Saturday, when Manchester United let slip what was a comfortable victory and drew 2-2 with Aston Villa after being two goals up. “We had exactly the same situation at Villa Park, being 2-0, with 15 minutes to play. And we didn’t want to make the same mistake,” the German driver clarified. This victory allows United to finish seventh, with 35 points, one behind Tottenham, although they have played two more games than Antonio Conte’s team.

United, beyond the final success, had a hard time settling into the match. Spain goalkeeper David De Gea had several saves early on, especially in front of Mathias Jensen, to keep his team afloat. In the second half came goals from Anthony Elanga (55), Mason Greenwood (62) and Marcus Rashford (77); Ivan Toney shortened for the locals with five to go.

On the same day, Tottenham took a notable victory from their visit to Leicester by 3-2, which they turned in the account with two stoppage-time goals scored by substitute Steven Bergwijn. The Londoners’ last-gasp winner came from a counterattack that Bergwijn finished past goalkeeper Kasper Schmeichel and with a touch that went in slowly. Since Conte’s arrival, Spurs have taken 21 out of a possible 27 points in the Premier League, eight of them coming after first trailing behind, a sign of the mental strength the Italian has brought to the squad. ”We have shown that we never give up. The players know very well what our philosophy should be. We have to fight until the end and try to get a good result”, celebrated Conte.

In the classification, Tottenham rises to fifth place and displaces Arsenal, in addition to stepping on the heels of West Ham (4th), the last team in the Champions League qualifying zone. And something else: Tottenham has three games less than West Ham.