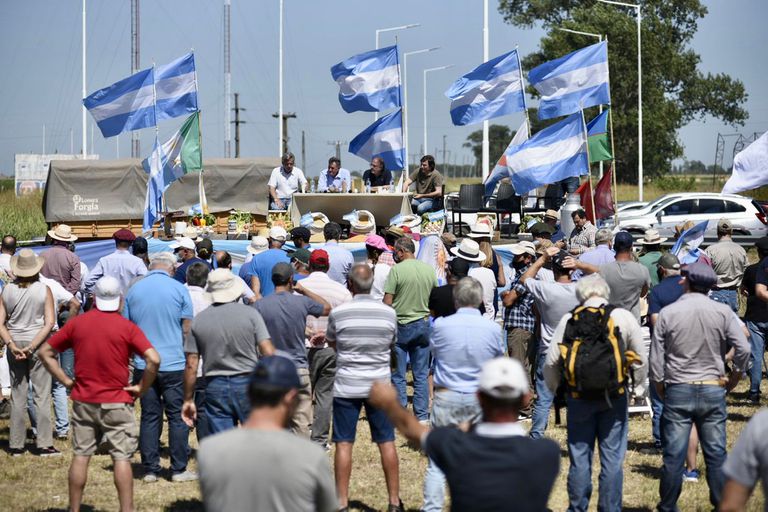 
In the midst of a great drought that is going through large productive areas of the country, the critical situation that small and medium producers are going through, the Argentine Agrarian Federation (FAA) ratified the holding of the assembly in the town of Alcorta, Santa Fe, in the coming weeks to show the discontent of the producers.

“Due to the lack of receptivity to our proposals, we have decided to move forward in holding assemblies in which we will make visible the enormous discontent that has existed for a long time in regional economies and is now deepening throughout the country due to the impact of inclement weather,” they said in the FAA.

In this context, the entity’s Central Board of Directors met to evaluate “the difficulties that the federated have dragged on for a long time.”

“This is also accentuated by the high tax pressure they suffer and the deplorable situation of the regional economies”, they indicated.

As described by the directors of the federated districts, the situation is similar in the different provinces, beyond some particular characteristics that may exist. In the meeting, they highlighted the enormous problem that “the growing gap between the high production costs in dollars, what is received for export, settled in the official dollar, and what is sold in pesos in the interior of the country.”

On the other hand, they mentioned other problems that afflict them, such as issues of “infrastructure, lack of multi-risk insurance, the insufficient emergency fund (increasingly marked by its obsolescence and by the increasingly serious problems generated by inclement weather), the impact of the inflation and the lack of predictability, among many other factors that added to the effects of the general economic crisis and the pandemic.”

“All this complicates the present and future of the federated producers and affects more strongly those who make up the regional economies”, they assured.

Finally, they pointed out that not only the Government, but also Congress and the different political forces, must understand that producers need solutions. “There is no longer time for delays for thousands of producers who fight daily to survive in our fields, producing the food that our country and the world needs”, they finished.

For its part, the Córdoba Regional Agricultural Entities Liaison Commission repudiated “the political management that the Government intends to impress on the distressing situation of lack of rain suffered by the agricultural producer throughout the country, riding artificial scenes of a supposed condescending accompaniment”.

Over the weekend, the Minister of Agriculture, Julián Domínguez, toured the fields of Entre Ríos and Santa Fe and met with producers to assess the impact of the lack of rain. In this sense, he said that the agricultural emergency fund, which has been unchanged since 2009, could be updated.

In a strong statement, the Cordoba entities indicated that “The announcement of the long-delayed increase in the agricultural emergency fund, disguising as assistance what in reality is nothing more than the insignificant reduction in a punishment that has suffocated agricultural production for 20 years national”.

“It transforms the State into the true oppressor of the Argentine countryside, it tries to confuse public opinion and once again shows the contempt with which the agricultural producer is considered,” they remarked.

Finally, the rural entities argued: “The urgent political and economic signal that the countryside needs is the elimination of export duties that trample on their present and condition their future and that of all Argentines. Everything else is pure story.”