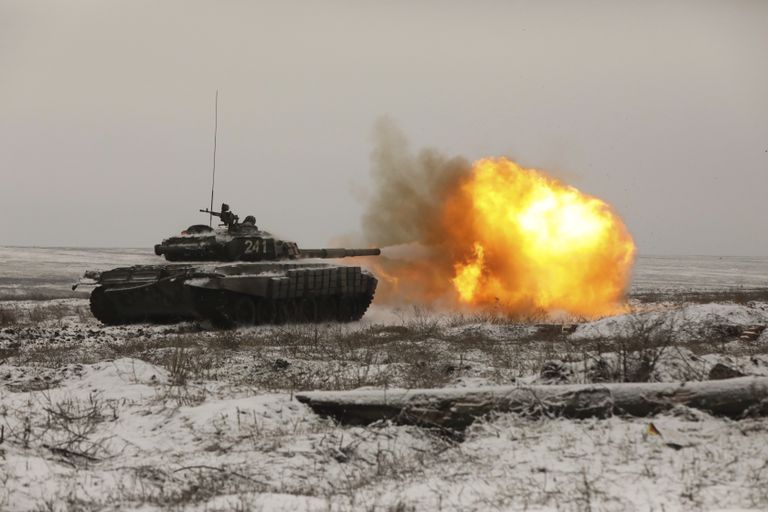 
The value of the grains is naturally influenced by its own reasons, such as more or less large harvests due to the action of the weather or buyers with more or less appetite. It also learned to live with exogenous factors, such as the fluctuation of exchange rates that provide a lower or higher degree of competitiveness to the merchandise put up for sale or the speculation of large financial groups that enter and leave the commodity markets. in search of quick income or refuge from inflationary processes. But throughout the history of trade, the price has been crossed by political decisions and even by armed conflicts that put at risk the supply of the demand for cereals, oilseeds and other products originating in the conflict zones.

The latter, based on the increased tension on the borders between Russia and Ukraine -and amid a high level of speculation in the markets-, is what today explains the upward trend in international wheat prices in recent years. days, with epicenters in Chicago and Euronext, where the cereal came out of the downward trend caused by the abundant influx of supply from the southern hemisphere, after the harvests in Australia and Argentina were larger than initially forecast.

“What is happening between Russia and Ukraine is today the main catalyst for increases in the wheat market, after it accumulated losses of around 55 dollars per ton in the two preceding months due to the huge harvests in the southern hemisphere. In that downward movement, which surprised even the speculators themselves, the market was oversold. Now we don’t know how temporary the tensions between these two countries will be, but the market is taking them seriously., as credit default swaps are much higher for Russian and Ukrainian companies this week”, Charlie Sernatinger, global head of Grain Futures at ED&M Man Capital Markets, told LA NACION from Chicago.

In the same way, Andrey Sizov, director general of the Russian consultancy SovEcon, stressed that the escalation in tensions between Russia and Ukraine, one of the reasons given for which is the refusal of the government of Vladimir Putin to allow Ukraine to join the Treaty Organization of the North Atlantic (NATO), today “is a preponderant factor in the rise in wheat prices”, both because of the fact itself and because of the attention that the market is paying to the development of events, although it added in its analysis the fact that “investment funds find themselves with large positions sold and are now trying to liquidate them , pushing the market higher. In addition, the increase in oil and the large recent tenders, such as those of Algeria and Turkey, which agreed to purchase more than 800,000 tons of wheat, also have an influence.

For Sergey Feofilov, CEO of the Ukrainian consulting firm UkrAgroConsult, “events in the region are currently very influential, but I am sure that they are only part of the factors influencing wheat prices, not the main ones.” And when asked by LA NACION, he added that “as long as raw materials and money don’t move quickly, I wouldn’t like to overestimate political factors.”

After the lows consolidated in the previous weeks, after Monday’s holiday in the United States, the value of wheat jumped 7.4% on the Chicago Stock Exchange, from 272.45 to 292.66 dollars per ton. On Euronext, the main reference market for cereal in Europe, the closest contract increased so far this week by 4.3%, from 263.50 to 274.75 euros per ton.

According to the latest estimates from the United States Department of Agriculture, the 2021/2022 wheat harvest in Russia left 75.50 million tons, of which 35 million would be exported, while for Ukraine these variables were calculated at 33 and at 24.20 million tons, respectively.

While the US Secretary of State, Antony Blinken, went on tour yesterday to meet with officials from both countries in conflict, journalistic versions reported that White House sources warned: “We are at a time when Russia could launch an attack on Ukraine at any time.” And from NATO, its secretary general, Jens Stoltenberg, assured in a press conference that “the risk of a conflict is real.” Meanwhile, the chronicles speak of at least 100,000 Russian soldiers stationed in border areas and Ukraine denounces a massive cyberattack against government offices. The 2014 conflict, when Russia annexed Crimea, remains latent in the memory of all parties.

For the purposes of price formation, in this particular case of wheat, each word – founded or imposed – is fuel for the administrators of the large investment funds that dominate the scene in the international agricultural futures markets. That is why the risk of volatility in scenarios like the current one also grows.

“The possibility of an open military conflict is low, but it is not zero. Neither party (Russia and the West + Ukraine) is interested in a military confrontation, but Russia continues to tighten the rope and something may get out of control,” Sizov told LA NACION. He added that Ukraine is an important part of history, “but the current one looks more like a conflict between Putin and the West.”

Based on his assessment of the current state of the market, Sizov indicated that “if Russian troops enter the territory of Ukraine we could see the wheat market 10-20% above the current level. However, strictly speaking, I believe that even an open military conflict would not cause a noticeable disruption to wheat exports, since the main terminals of Ukraine (Black Sea) are far from Russia. There are some terminals in the Azov maritime controller, mainly on the Russian side, but they are not important.

Sernatinger explained that, if he were to speculate, he would give a 5% real probability of a Russian invasion of Ukraine. “Putin has a lot to lose if he were to take such a step, without even the support of his people. The cost of an invasion is enormous and sanctions against Russia would cost the country too much on the economic front. US and European banks are likely to be forced to withdraw credit from Russian and Ukrainian grain buyers in the event of an invasion, so buyers will need Russian credit or cash to buy grain in the Black Sea area. ”, said the analyst.

For the general director of SovEcon, in a possible war, the role of Turkey will be very important “since almost all grain exports from Ukraine and Russia are made through the Bosphorus Strait, controlled by Ankara. However, an escalation to that point would result in a disastrous scenario, because grains are a small part of the story, other commodities, such as oil, are much more important.”

Sizov recalled that in March 2014, after Russian troops entered Crimea, the international value of wheat “increased by more than 20% in a few weeks, and this happened without a noticeable interruption in grain exports from the Black Sea.” ”.

But just like the in crescendo of the tensions generated the rise in wheat prices – they also contributed to the increase in corn, given that Ukraine is the fourth largest exporter in the world –, a triumph of diplomacy could generate a drop in prices. “A price decline may occur if tensions ease, but it won’t be a huge crash. There is still uncertainty about the size of the Northern Hemisphere winter wheat crop from June and how much spring wheat will be planted in North America (there is currently a greater incentive to plant soybeans, to the detriment of the grain). In addition, as I mentioned before, the wheat market has already had a significant drop in the preceding weeks. (around 55 dollars per ton). The seasonal trend indicates that prices fall towards the end of June in the futures markets, but it seems that much of those losses already occurred after the entrance of the supply from the southern hemisphere, “said Sernatinger.

Sizov also considered that a cessation of hostilities would cause a drop in wheat prices, while in the case of corn, where the lack of humidity in areas of Brazil and Argentina was the determining basis for the upward trend, he maintained that more that what happens in the Black Sea area will be the weather in South America that will continue to determine the course of the market in the coming weeks.