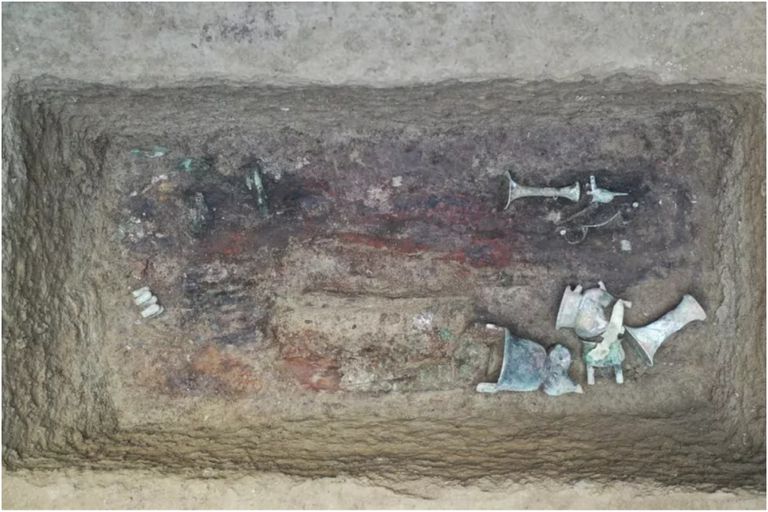 They discover tombs of warriors of a Chinese clan buried in a macabre ritual: “It is very rare”


A new archaeological find surprised in an ancient Chinese capital. It’s about 24 graves that have 3,000 years old and it is estimated that they belonged to a clan of that time. They include remains of Warriors, horses of war, and hundreds of objects In perfect state of conservation.

The discovery was made at an archaeological site in the city of Anyang in Henan province. According to the first information revealed by the government news agency Xinhua, the ruins belonged to the Shang dynasty, a group that ruled between 1600 B.C. C. and 1046 a. C in the ancient city of Yin.

Among the finds Several war chariots, remains of the warriors’ horses and some of their hats stand out. “In the chariot and horse pits at the Shaojiapeng site, some sacrificial horses had ornaments hung on their foreheads,” revealed the government statement.

For its part, Kong Deming, director of the city’s Institute of Cultural Relics and Archeology, reported that the finding caused the surprise of all the researchers. “This is very rare among the ancient Anyang finds, reflecting the extraordinary status and power of the chariot owner,” he noted.

In order to provide more data on the recent discovery, a Pennsylvania State University study explained that at that time the practice of “ritual suicide” of servants, or the act of volunteering to be buried alive at their masters’ funerals was a common practice in the Shang dynasty of China.

Anyang archaeologists excavated at the site for a total time of two years. Among the objects and constructions they have found are the foundations of 18 ancient buildings, burial pits and vessels of the time.

Regarding who the remains found belong to, archaeologists appreciated that the place was very important for the clan called “Ce”. This was confirmed by the inscriptions they found on some items bronze located inside the tombs.

Among other issues, Kong clarified that this is not the first time there have been records of the clan. In one of the earlier findings, in writings found at Yingxu, they found the same inscription on tortoise shells and animal bones. “They comprise the earliest known Chinese writings. The clan emblem appears on many of the objects found on the site, so we believe the clan was active in this area.”

As if that were not enough, in addition to the bronze items, the researchers found other types of relics: objects made of jade -a type of precious stone-, bone and shell. “Many were lavishly decorated, suggesting the clan was wealthy”Deming mentioned.

Nowadays, archaeologists are investigating a little more about the social status of the clan, their division of labor, and their relationship with the Shang royal family. Fortunately, however, Kong explained that this recent finding provides more tracks about how the houses of the Shang dynasty were built, something that is still a mystery.

Although this discovery was shocking due to the details, it is not the first time that a finding of this type has been made.. According to the Chinese newspaper Xinhua, last December several ancient tombs, houses, ovens and wells dating from the same period, in addition to 170 artifacts made of bronze, ceramics, jade and bone they were unearthed at a nearby archaeological site.

What is known about the Shang dynasty, one of the oldest in China

According National Geographic, the Shang dynasty was in charge of the Government from the middle and lower parts of the Yellow River Valley, a region widely considered the birthplace of Chinese civilization.

The territory extended into the northern half of present-day Henan Province and the southern half of Hebei. Precisely the clan, in 1046 BC C, was overthrown by the Zhao dynasty, who ruled until 256 a. c.

The Shang dynasty becomes more important since it is the first to be supported by archaeological evidence, and they are also part of the first writing records in that country.