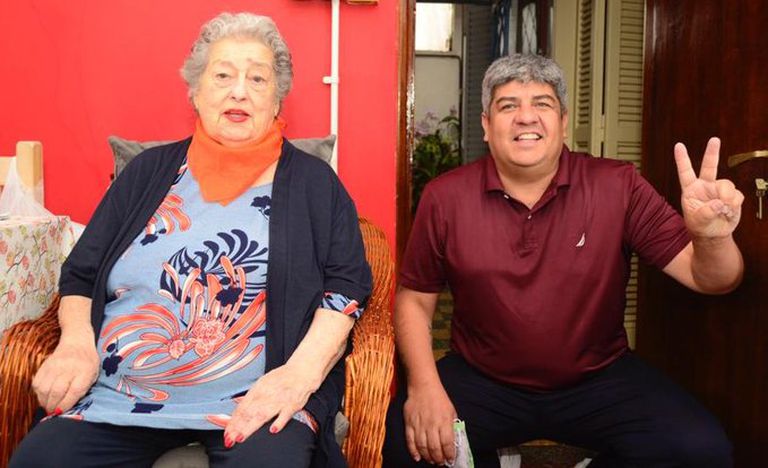 
The co-secretary general of the CGT, Paul Moyano, met this Wednesday with the head of the Mothers of Plaza de Mayo, Hebe de Bonafini, to advance the guidelines for the mobilization that will take place on February 1st against the Supreme Court of Justice. This was reported by the Truckers union account on social networks.

The meeting was held at the residence of the social reference in La Plata. “They discussed organizational issues of the February 1 march, the situation with the IMF,” reported the union organization. Moyano, who has denounced union persecution during the macrismo, is one of the main promoters of the march.

As published by LA NACION, the mobilization, convened for 6 p.m. that day in front of the Palace of Courts, began as a proposal from different Kirchnerist sectors on the networks. Who initially appeared at the head of the initiative was the judge Juan Maria Ramos Padilla, father of Alejo, who carried out the cause of the false lawyer Marcelo D’Alessio. However, with the passing of days, more figures were added to the measure.

In addition to Moyano, also the social leader Louis D’Elia recently appeared among those who support the measure. The social leader even requested the resignation of the four judges of the highest court of Justice. “We want them to leave and never come back. We must not kick anyone out, we do not need to resort to violence because reason and truth assist us,” he told Radio Rivadavia.

The March divides the leadership of the CGT. Moyano, one of the members of the commanding triumvirate, confirmed his participation while Carlos Acuna, another of the bosses, took distance. While, Hector Daer, the third referent of the workers’ central, has not yet expressed himself on the measure.

“Alone, with a truck or with thousands, but accompanying the workers”, was the expression that Moyano used days ago to ratify his support for the mobilization. In addition, he said, in dialogue with AM 530, it is about “a matter of dignity”. “We were one of the most persecuted organizations during the macrismo, with fines of 1,000 million pesos,” he deepened. “Now society is surprised by what we have been denouncing. I will march to demand once and for all that justice be done in the Supreme Court“, Held.

The march, which had the support of President Alberto Fernández, was called amid tension between the Executive and the Judiciary. Sectors of Kirchnerism promote it on social networks under the slogan #1FMarchamosALaCorte.

In turn, the Vice Minister of Justice, Juan Martin Mena, maintained that a “fed up” was reached and said that “the people have to make themselves felt” regarding the mobilization.

The mobilization against the Supreme Court of Justice was firmly rejected by the Association of Magistrates and Officials of the National Justice, who particularly questioned the statements of Alberto Fernández and Mena. “These attitudes exorbitate the scope of the constitutional powers of said officials by expressing, in a generic and unfounded manner, public judgments regarding the functioning of another independent power,” they added.

Meanwhile, a demonstration in support of the highest court was recently called. The so-called “counter-march” is organized by lawyers and law professors from all over the country for February 3.

The proposal was led by the lawyer and professor of constitutional law, Diego Hernán Armesto, who explained to THE NATION that the initiative was born to “defend the institution of the Supreme Court, the Republic and the National Constitution”.