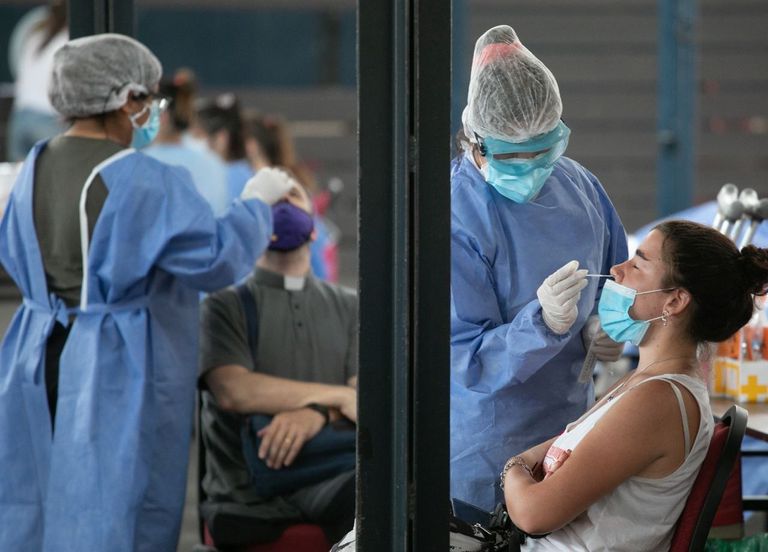 A medical adviser to the Government predicted when the cases will drop: “If people wear a mask, the scenario will be very good”


The raise the cases of Covid-19 -which reached historical records in this third wave in Argentina- “it’s already broken”, As specified by the medical adviser to the government, Luis Camera. Meanwhile, the professional highlighted the encouraging outlook brought by international standards, which, he said, notify that in the first days of March “we should be like in the first days of December”.

However, Camera was concerned that the lack of care – especially in tourist centers – would delay this decrease in infections. “If people wear a mask, the scenario is going to be very good,” advancement.

“The cases are going down. In theory, international standards say that just as we ascended so quickly, the descent must have almost the same speed”, stated Camera in the first place, who warned: “What do I think? That in the face of social behavior, with the lack of use of a chinstrap or with what they do in tourist places, the curve is not going to go down at the same speed, or I am afraid that will happen.

In the event of this last scenario, the doctor recalled that one more problem could be caused, linked to the definitions as to how the beginning of classes will be in the country, marked by the third wave. “If it doesn’t descend at the same speed, We are going to have many more cases in February than projected, so more people hospitalized, more people in intensive care and more political and psychological stress, why would we be facing the issue of schooling at the end of February. It is one thing to arrive at the end of February with 10,000 cases and another to arrive with 60,000. There is going to be a political noise,” he considered in Radio The Network.

In addition, the doctor questioned the images with lack of personal care that emerged from tourist places -with full beaches and bars, without social distance- and proposed a possible scenario to exemplify his theory: “A person goes to the coast and becomes infected , yes or yes it gets infected. When those people return, in a small city of Buenos Aires, which was in a calm wave there, it will turn red. That is going to happen throughout February, when people are returning from places with many infections, which are the tourist ones.”

However, he gave a recommendation on how to ensure that cases definitely drop at the expected rate in March. “It depends if people wear a mask. If people wear a mask, the scenario is going to be very good and the first days of March will come with very few cases, that is, they would not be so many as to scare. Or we can have a decline in higher numbers as well, which is what no one would like to see happen,” Camera said.

In this regard, he added his opinion: “I do not fully embrace what the projections say is going to happen, but with my medical intuition I give it a local interpretation. If we could recover the mystique of the chinstrap, we would be fine; if we don’t get it back, the possibility of it being more difficult to resolve is quite likely. In March we are going to solve it: in a lighter way or in a heavier way”.

Meanwhile, he said that the following three or four weeks will be “the most difficult” in terms of hospitalizations. “The cases come first, then the patients are hospitalized and some go to intensive care. The next few weeks and the first two of February are going to be the weeks of greatest hospitalization, basically clinical. In therapy we are not going to have that critical situation of the second wave,” he said.

The doctor also focused on how infections with the omicron variant, which is more transmissible, affect health personnel. “We got very infected. We are having difficulties with human resources. We pushed hard for the isolation times to decrease because we had a very high absenteeism that overloads the system and causes patient care to decline,” said the doctor, who stressed that now the important thing is to address patients who have “serious symptoms” as soon as possible.

He also said that this stage of the pandemic differs from the time it started. “I call it ‘Covid-21’. Hopefully we go to a mild form, which is a strong cold. It gives the whole feeling that we are on that path. The problem is the transmission. It is highly transmissible and very difficult to contain,” said Camera regarding ómicron and pointed out that, at this time, everyone is simultaneously experiencing the same virus; something that did not happen in the first moments.

“We are concerned in the clinical world that the vast majority of cases consume care and the system is very resentful, because many doctors have become ill. [Ómicron] it is generating many problems in human resources and it is already generating deficits in testing in some sectors worldwide, because what it is consuming in resources is very large”, Indian.

On the future of the coronavirus, he stated: “It is going to be a very simple disease, we are going towards that model if the population is all vaccinated”. Regarding this, he warned that in Argentina there is still a part of the population – made up of children and young people not inoculated with the complete scheme and people who decided not to be vaccinated – who are “immunologically vulnerable”.