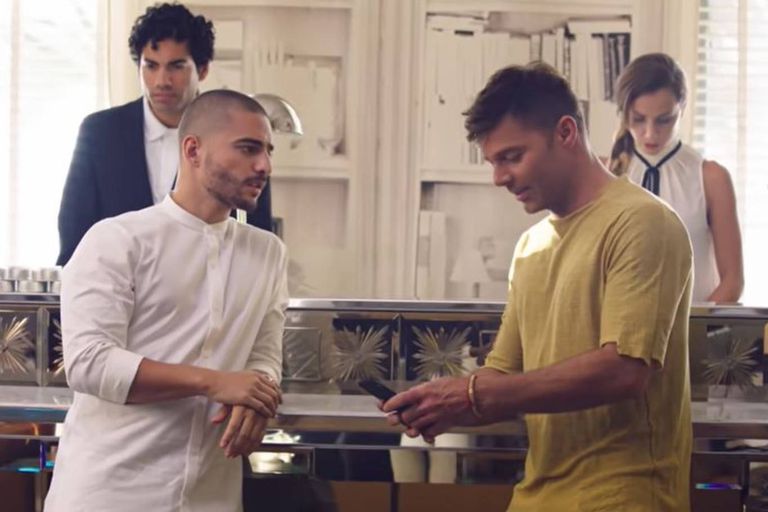 A TikTok user revealed a grotesque mistake in the video clip “Vente pa’cá”, by Ricky Martin and Maluma


A TikTok user began to look in detail at the video clip of the song “Vente pa’cá”, performed by Maluma and Ricky Martin and discovered a grotesque mistake in the first scenes of it. How could it be otherwise, this tiktoker He shared his discovery with his followers, and the clip failure became a viral phenomenon.

Although the performance of the Colombian singer with his Puerto Rican pair dates from 2016, the user LucasRodriguez55 revealed the bug in a video he posted to his TikTok account earlier this January. The young man did not have the slightest problem in captivating the two artists and asking them, in the caption that accompanies his video: “Can you explain to me what the idea of ​​this scene was?”

In the video uploaded by Lucas it is possible to see the opening scene of the video of Maluma y Ricky Martin, while the voice of the tiktoker describes what is happening. In the scene basically The Puerto Rican is in the hall of a hotel, as if saying goodbye to the receptionists, and there his Paisa colleague enters. Both greet each other effusively and take a selfie.

So far, nothing unusual. But the TikTok user is more meticulous in his observation, and step by step he describes something that is not right. “The video begins with him (Ricky Martin) and Maluma talking, I suppose at the entrance of a hotel,” Lucas begins his story. “But pay attention to that guy and this chick”, he adds, as the camera zooms in on the two “receptionists”, a young man and a girl.

“They pretend to be with a computer, writing”. Indeed, both characters are, apparently, typing their own notebooks, which cannot be seen because the counter has a small elevation. But then the tiktoker makes his first discovery. “There is a faucet”, he says, and the image focuses exactly on the place where the young woman is typing on her computer.

The user then focuses on the receptionist and says: “He keeps pretending. Look how he makes that he is looking at a screen”. Next, Lucas continues with the scene. “So, Ricky says (to Maluma): ‘Let’s take a picture. And when they do that (laughs) we can see that there is nothing. Any. There isn’t even a screen.”

The young man refers to the counter. In the place where the computers were supposed to be, now it is seen, thanks to the elevation of the selfie, that there is absolutely nothing. It’s more, in the place where the woman was typing, you can see that there is a sink. And behind her, an oven. Apparently the place was not a reception, but a kitchen. “What’s going on?”, the user wonders, given the evidence that something went wrong in the video clip.

But that is not the only error that Lucas finds in this beginning of “Vente pa’ aqui” -before, even, that the two begin to sing. The other drawback that is perceived is that in the selfie what does he get Ricky Martin, he stretches out his arm and they both see each other from above (which allows them to see what was on the counter).

“Regardless of the fact that Ricky stretches his arm and this photo is seen (both from above), this is the photo that was uploaded to the networks, and it is not at all the same as the one we just saw”says the user. That is, the singers took a photograph, but when they uploaded it to the networks it became another.

The video had a 19,000 views and humorous explanations appeared in the comments of what could have happened so that the “Vente pa’cá” clip began with that error.

“It is set in 2216, a future where computers live in people’s minds. and they are controlled by brain waves,” said one user; “There was no budget to film in a hotel”, added another; “They were chopping onions.”, put a third; “They’re writing it down on their invisible typewriter,” joked another, recalling a classic scene from the Chief Gorgory on The Simpsons.