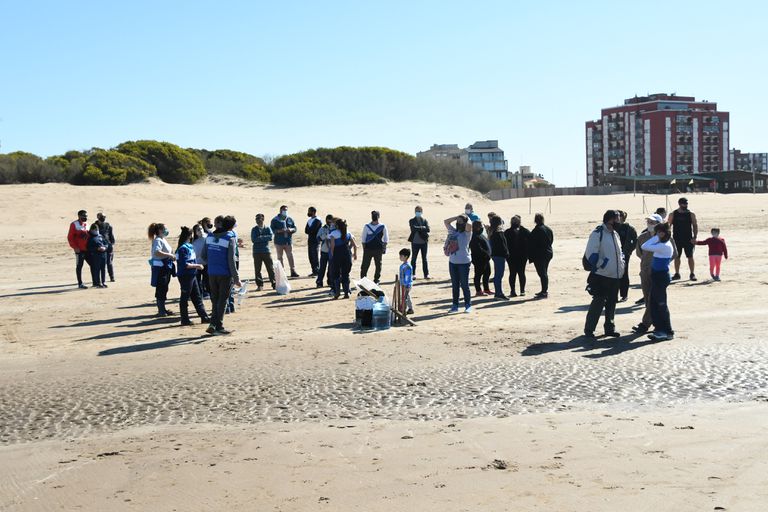 Alert in the sea: they surveyed the waste on the Buenos Aires coast and once again found the “great enemy” of the fauna


Due to the extreme environmental impact, the data alarmed. Of a total of 40,331 waste that was collected on the Buenos Aires coast, 84.5% corresponded to plastic waste. Thus it follows from Provincial Marine Coastal Garbage Census in Argentina, carried out by twenty NGOs from the sector. During September and October last year, 438 volunteers surveyed a total area of ​​422,501 square meters in 21 locations (from San Pedro to Isla Lucero, in front of Bahía Blanca) and were able to rank the main types of plastic pollutants, among which were: cigarette butts (19,6%), fragments of this material(18,7%), wrappers (13,2%), bags (10%) and nylon leftovers (8,1%).

“There are more and more animals that we receive at the rehabilitation center that interact with plastic, and that are affected by this problem.” he claimed Karina Alvarez, biologist and head of Conservation at the Mundo Marino Foundation, which was one of the institutions that participated in the census.

The specialist was also co-author of a study published in the international magazine Frontiers that analyzes how different species of the Río de La Plata Estuary function as biological indicators of negative interaction with plastics: “We identified the franciscan dolphin as the main indicator species of this problem. There are also three sea ​​turtles (green, bighead and leatherback), the sea ​​Wolf, the magellanic penguin and the kelp gull”.

In 2016 the idea arose of carrying out this survey to record the situation of the beaches of Buenos Aires and promote measures aimed at reducing the amount of garbage that reaches marine ecosystems. “The fact of being able to count and give waste a number allows us to analyze, evaluate and work on people’s consumption habits. In addition, it serves as a management tool when thinking about resolutions to improve the management of garbage treatment,” Álvarez said about the fifth installment of this census, which in 2020, due to the pandemic, was not carried out.

This year, for the second time in a row, cigarette butts led the ranking of plastic waste. However, although in 2019 they occupied 27.3% of the waste of this material, this time the percentage was reduced to 19.6%. “From the fourth census, which marked cigarette butts as the main item, specific places for smokers were created on the beaches of Pinamar,” said the biologist.

This is essential since, according to some environmental reports, this waste is one of the most complex water contaminants. It is estimated that it can affect between 8 and 10 liters of sea water and up to 50 liters of fresh water. It is also estimated that it can take up to 10 years to decompose. In fact, a butt is made of cellulose acetate, a non-biodegradable material whose function is to absorb toxic substances from tobacco smoke.

Despite more and more awareness campaigns, the amount of plastic waste remains above 80% each year. Alvarez argued that Due to the pandemic, consumption habits were regressed, mainly in the use of reusable plastics. For this reason, although he recognized that it is not a simple task, he insisted that people have to try to change their behavior: “Being a global problem, the results will not be seen quickly. That’s why awareness campaigns matter. People have to understand this problem and promote the circular economy to make it easier for people to recycle waste.”

And he added: “The percentage that is recycled in Argentina is minimal. It is a problem not to treat it properly because the plastic that is not recycled ends up going around and then ends up in the sea. Many times we do not see the problem, because not all the plastic remains floating on the surface, and that is why they are the animals who show us the environmental situation of the sea that we have in front of us and we are not seeing”.