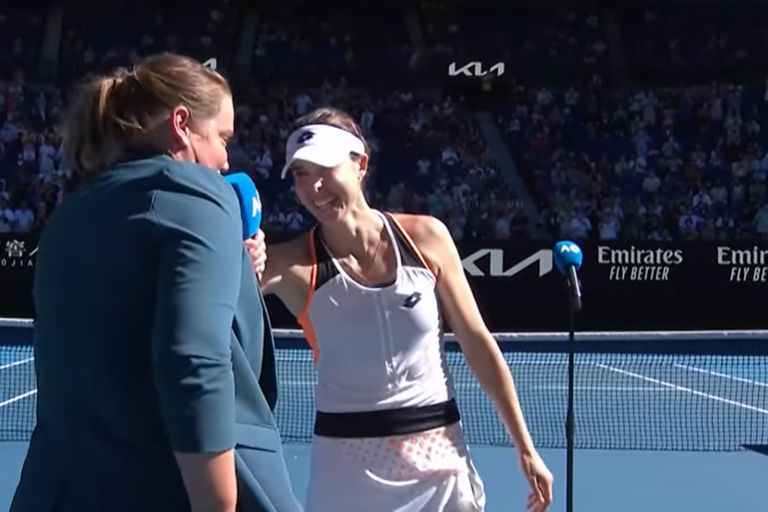 Australian Open: Alizé Cornet broke down in tears after achieving her first quarterfinal in 63 Grand Slams and paid tribute to Jelena Dokic


In his seventeenth participation in the Australian Open, his 63rd Grand Slam and two days after his 32nd birthday, French tennis player Alizé Cornet qualified -for the first time- to the quarterfinals in one of the four majors. She bounced back from a poor second set in the sweltering Melbourne sun to beat former No. 1 Simona Halep of Romania 6-4, 3-6, 6-4. His celebration was extremely emotional and the moment of sensitivity was extended in the subsequent interview conducted by Jelena Dokic, semi-finalist at Wimbledon 2000 and also well remembered for having suffered terrible abuse from her father.

“It’s never too late to try again!”, celebrated Cornet in the talk he had with Dokic in the middle of Rod Laver Arena. “That time I was really dying to play against you and thirteen years later I’m still here”, commented the current 61st in the world ranking to Dokic, referring to the edition of the Australian Open 2009 when she lost in the round of 16 against the Russian Dinara Safina wasting two match points and could not face the former athlete born in Osijek, Croatia, but Australian representative.

Of course, Cornet, with her heart in her hands and excited for her next challenge in Australia against Danielle Collins (USA), continued, going further, paying a kind of tribute to Dokic. “I would also like to dedicate a round of applause to you because you are an example of how to turn the page and move on. You were an amazing player and now you are an amazing commentator.”, Cornet told the Balkan woman, who ended up crying, alluding to her recovery after the problems she went through as a tennis player because of the abusive treatment from his father and coach. The two hugged each other and the audience on the center stage of Melbourne Park gave them a sweet ovation.

Dokic, number 4 in the world in August 2002, retired from professional tennis in 2014 due to an injury and had a very bad time after leaving the courts. She suffered a deep depression that led her to take refuge in food and weighed 120 kilos. He was on the verge of suicide. Dokic knew how to win his own battle little by little. He confessed it in an autobiographical book, where he gave an account of his father’s abuses. In addition, she told how a strict diet was proposed that led her to lose 57 kilos since the beginning of the treatment.

“I wasn’t healthy or fit, but more importantly, I was very unhappy, lacking confidence. I didn’t want to leave the house and I even turned down job opportunities because I was so insecure and unhappy.” narrated at the time. Today, his life has another meaning and a former rival like Cornet recognized him in the middle of one of the most prestigious tennis stadiums in the world. “Now we’re all going to cry,” Dokic blurted out before hugging Cornet.

Later, after the victory against Halep, Cornet elaborated on Dokic: “Thirteen years ago, when I had those two match points against Safina to reach the quarterfinals, Dokic was the one waiting for me in that round, I was supposed to have played against her. I don’t know why today, when playing, I was thinking about her. It was a game that I never got to play, so we didn’t play again after that. I always followed her, I read her book, I’m glad to see her now and know that she is doing well. She is a great person and I wanted to share that moment with her, I think it made a certain sense.”

Cornet and Halep competed in one of the most suffocating days of the current edition of the Australian Open. “It was a battle with Simona in all this heat. After 30 minutes on the court we were dying. We continue for two and a half hours with all our hearts,” said Cornet. And he added: “Congratulations to Simona, I know she fought a lot and I admire her a lot. She is a great fighter and an example. To have beaten her today to reach my first quarterfinal is a dream come true”.

Halep missed Wimbledon and the French Open during an injury-plagued 2021, but looked at her best at the start of the current season, racking up nine straight wins, including a title in Melbourne before the Grand Slam. The 30-year-old Romanian had only conceded 12 games en route to the fourth round, but looked exhausted as the match against Cornet wore on, leaning on her racket between points to catch her breath.

The Belarusian Aryna Sabalenka, number 2 in the world ranking, suffers from a severe obstacle with his serve and double faults. Without confidence, he had avoided elimination in each of the first three rounds of the Australian Open, but this Monday in the round of 16 he said goodbye by losing to Estonian Kaia Kanepi (115th) 5-7, 6-2 and 7 -6 (10-7), match in which he committed 15 double faults.

Kanepi, 36, who had never passed the third round in Melbourne and whose last title on the WTA circuit dates back to 2013 (Brussels), will face Poland’s Iga Swiatek (9th) in the quarterfinals, who beat the Romanian Sorana Cirstea by 5-7, 6-3 and 6-3.

The other matchups in the women’s main draw quarterfinals were determined as follows, from top of the draw: Ashleigh Barty (1st, Australia) vs. Jessica Pegula (21st, United States), Barbora Krejcikova (4th, Czech Republic) vs. Madison Keys (51st, United States) and Cornet vs. Collins.