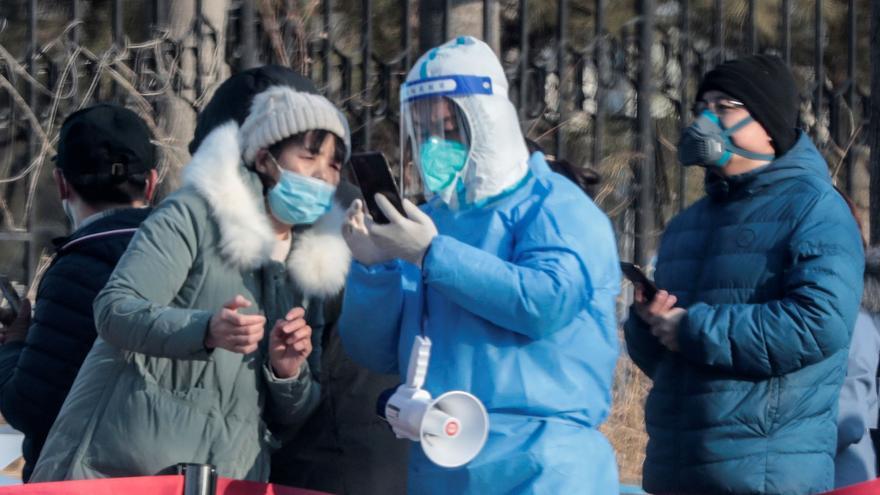 
In Beijing has landed the coronavirus after two years without recordable anguish. The Pekingese had heard like a distant echo the confinements and massive tests in other parts of the Chinese geography and now they concentrate the bulk of the positives in the country. They would be irrelevant magnitudes in another part of the world, just 43 cases in a week after the nine today, but they are intolerable in the city that is decked out to turn on the olympic cauldron in less than two weeks.

Is a complex and serious situation, the municipal spokesman clarified this morning. The imminence of the event and the refined politics of zero tolerance they explain strict measures even for Chinese parameters. The two million habitantes de Fengtai, a working-class district in the southern belt of the city, were analyzed on Sunday in the thousands of posts set up in its streets. Tomorrow they will have already gone through their second round of tests and the casuistry suggests that it will not be the last.

Controls have been extended to wealthier neighborhoods like Chaoyang, the finance core and leisure, or Dongcheng, the old historical helmet. Many neighbors waited today in the street during the icy winter in Beijing for the processing of the PCR without contagions having transpired in their areas. “The security guard of our residential complex knocked on the door when it was after 10 at night to inform us that today we had to take the test without fail. At noon there was a huge queue but the process is efficient, in 40 minutes we had finished”, reveals a Spanish architect who lives in the north of Sanlitun, the neighborhood with the highest concentration of foreigners.

The strategy seeks to ensure that no contagion remains off the radar. Anyone who has bought medicine for fever, cough or sore throat in a pharmacy in the past two weeks is required to take the test or risk losing their green health code of your mobile phone that is required to travel or enter public facilities.

Widespread payments over the phone that leave a unmistakable trace make deception impossible. Pekingese have also been recommended not to leave the city if it is not essential, facilities as iconic as the lama temple and informed that the schools will remain closed after the impending Chinese New Year holidays.

The Pekingese outbreak is a cruel paradox when China I wanted to show that the Olympic Games can be managed reasonably normally in times of a pandemic. Last week, when the coronavirus broke out in the city, he renounced the sale of tickets to the public and reported that only groups invited by the authorities will be able to sit in the stands after passing scrupulous controls. The measure emphasized the dangers of omicron, less harmful but more contagious than its predecessors. The medical authorities revealed in the local press that the personnel in charge of tracing the contagions barely sleep three or four hours these days to achieve an objective that seems chimerical today: preserve the festive atmosphere during the Games and bridle the contagions.

The restlessness in the capital contrasts with the recovered calm in other cities that had received the visit of the coronavirus. In Xian, the capital of the northern province of Shaanxi, today ended the lockdown after a month. The strict confinement of its 13 million inhabitants showed that, two years after the lockdown in Wuhan, China remained faithful to the recipe book. The outbreak in Tianjin, the port city east of Beijing, has also been quelled. The alarms continue to only sound in Beijing, which has already exported its infections to provinces such as Shandong, Shanxi, Liaoning or Hebei.