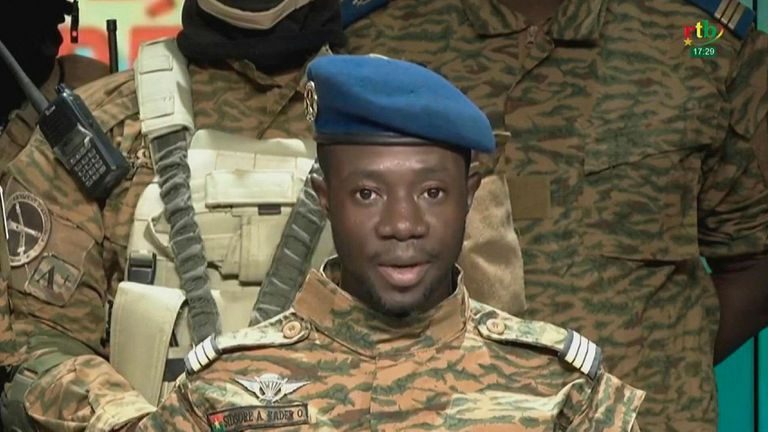 
UAGADUGU.- The government of Burkina Faso fell today into the hands of the military in a coup that he ousted the president, Roch Marc Christian Kaboré, and dissolved parliament over criticism of the authorities for their failure to contain the rise of the Islamic State (ISIS) jihadist groups and al Qaeda.

Captain Sidsore Kaber Ouedraogo Together with a group of soldiers, he declared on state television that the Patriotic Movement for Restoration will work to establish a calendar “acceptable for all” for the calling of elections.

The rebel armed forces claimed detain the president, the leader of parliament and some ministers, who were transferred to a barracks in the capital Ouagadougou, confirmed various security sources, while three riddled vehicles and traces of blood were observed near the residence of the head of state.

In addition, the coup plotters closed the borders, while promising a “return to constitutional order within a reasonable time”.

The crisis broke out on Sunday, with episodes of mutiny in several barracks and anti-government demonstrations in which the Kaboré party headquarters was set on fire.

The conditions for the coup grew due to the broken security policy conducted by President Kaboré, a rebel spokesman said, who called for “adequate means” in the fight against jihadists, the “replacement” of military leaders and help for the families of the victims.

Since 2015, The African country suffers from terrorist attacks carried out by jihadist groups that caused death and destruction, in the face of a fragile and poorly equipped national army.

A devout Catholic former banker in a majority Muslim country, Kaboré was chosen in 2015 to turn the page, a year after the popular uprising that ousted dictator Blaise Compaore.

In 2020, he remained in power under the promise that he would cleanse the jihadists, at a time when attacks on civilians were taking place daily.

But nevertheless, the violence never ceased, in fact it increased, as did the anti-government demonstrations.

The African Union and the United Nations have “strongly condemned” the escalation in Burkina Faso.

The Secretary General of the UN, Anthony Guterres, declared in a text that he was concerned about the “protection and physical integrity” of Kaboré after “the coup d’état perpetrated on January 23 by sectors of the armed forces.”

Meanwhile, the United States urged the “immediate release” of the president and called for the constitution of the West African nation to be respected.

“We call for the immediate release of President Kabore and other government officials and for members of the security forces to respect the Constitution and civilian leadership of Burkina Faso,” said an official from the US State Department under condition of anonymity.

“We urge all parties to this ongoing situation to remain calm and seek dialogue as a means of resolving grievances,” he added.