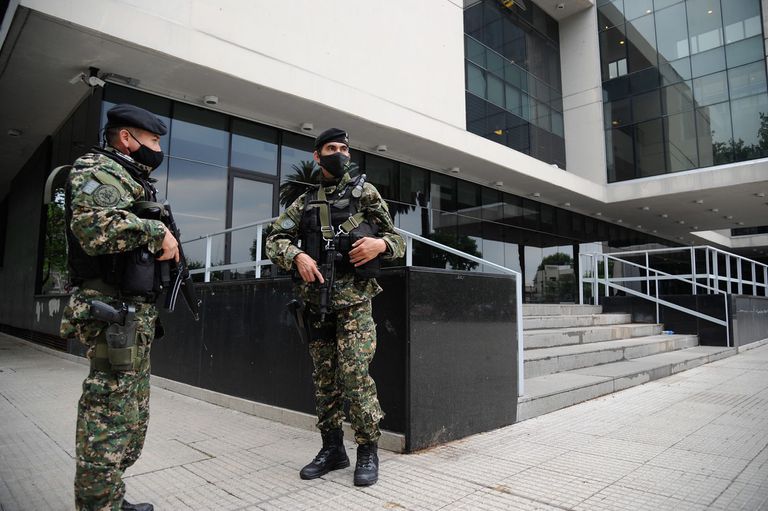 
The Association of Judges and Officials of the National Justice (Amfjn), which brings together federal and national judges of all country, complained to the national government for drug threats against the provincial prosecutor of Rosario Matías Edery and the attacks of drug cartels against judicial officials and authorities of the Penitentiary Service. Said A response from the State is necessary to prevent drug trafficking from having political influence and territorial control in Argentina, as is the case in other countries in the region.

In a statement, the entity chaired by Marcelo Gallo Tagle He pointed out his concern for the repeated threats and attacks against federal and provincial magistrates from Santa Fe -which they have been denouncing since 2014- for their investigations and trials against organized crime.

Deputy Prosecutor Matias Edery de Rosario he was threatened during a hearing in which he was fulfilling his function. The next day, the Internal Affairs headquarters of the Santa Fe Penitentiary Service was attacked once again.

“We urge the administrative and political authorities, as well as the security agencies, to adopt all the essential preventive measures to safeguard the physical, personal, and family integrity of the members of the Public Ministries and the Judiciary, as as well as the forces that help them, who are exposed to repeated criminal actions,” the magistrates wrote.

From the Association they said that it is about reaffirming the powers of the State against criminal gangs. “It is essential to affirm the will of all the powers of the State to clearly establish the message that experiences that have devastated (and continue to do so) countries in the region will not be allowed to be repeated in our country, in which drug trafficking and Organized crime has come to have political influence and territorial control.”

Last Thursday night, around 10 p.m., a threat appeared written on a cardboard against prison guards. The day before yesterday, Lorraine Verdun, the mother of Luciano Cantero, the new leader of Los Monos, launched an intimidation against prosecutor Edery at a hearing in which she and her son were detained: “This is not going to end like this”. The next day, the omen was fulfilled. Yesterday at dawn from a motorcycle they shot at the Internal Affairs headquarters of the Santa Fe Penitentiary Service In this city. This is the fourth attack in two years against that building. That same day there were calls to 911 with bomb threats against government headquarters.

According to government sources, In the face of this wave of threats, the custody of the police units was reinforced and since Friday more patrols around the prisons were also added., given the possibility of an external attack as occurred last June, when seven prisoners escaped.

At the headquarters of Regional Unit II, it was decided to work with a closed gate, that there be employees with bulletproof vests at the door and that each vehicle that enters the property be checked.

Another fact is added to the chain of threatening and violent episodes: the day before yesterday, during a search, when Luciano Cantero was transferred from the Rosario Detainee Reception Office (Order) to the Mayor’s Office of Penal Unit No. 11 of Piñero a smartphone was seized. The suspect is the 19-year-old son of the assassinated historical boss of Los Monos, Claudio Pajaro Cantero, and who is accused of murder and arms stockpile, obtained the phone in the Order or during the transfer to jail.

The Santa Fe government said it will give all guarantees to prosecutor Edery to continue carrying out his duties in the Organized Crime Unit, which he heads together with Luis Schiappa Stone. These two investigators have long had strong custody due to the risk and threats they face in their work at the Public Ministry of the Accusation.

The rejection of the threats was generalized in the political environment. The Santa Fe Magistrates College asked the authorities “extreme security measures” of prosecutor Edery “in order to continue fulfilling his obligations, as well as the formulation of the pertinent criminal action, so that said act deserves the corresponding sanction.”